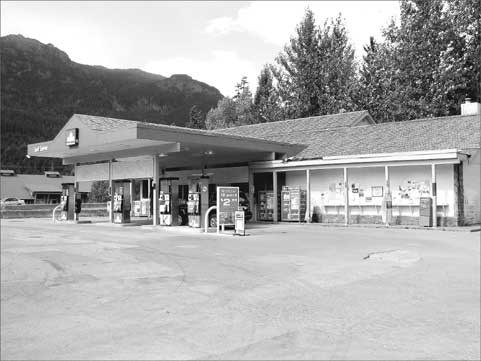 A flier being offered to patrons says the closure is temporary, photo by Andrew Mitchell

Petro Canada is closing its Whistler Creek location on Tuesday, Sept. 5, following the long weekend and it’s unknown when, or if, the station will reopen.

A flier being offered to patrons says the closure is temporary, and that the company is moving forward with redevelopment plans. But staff at the service station said they have not been told for certain whether the station will be rebuilt.

The location is owned and managed by Petro Canada corporate headquarters, and local station manager George Samaris said just three employees will be without jobs after the closure.

The closure comes just as Petro Canada is wrapping up a remediation project in the area, which started in 2001 after a gas plume was discovered from a leaky tank in 1999. Rather than dig up the entire area, the remediation process used a series of pipes and recovery wells to slowly draw the gas up from the groundwater and soil. That process was expected to complete in late 2006.

In the meantime the plume slowed down the redevelopment of Franz’s Trail, including a rerouting of Whistler Creek.

Samaris says the cleanup is close to being complete. "There’s not much left to clean up, just a little bit there and it has to be done by December," he said.

Once the site is completely remediated Samaris doesn’t know how long it will take to rebuild, if that’s what Petro Canada decides, but he believes it will take a while. He says it will be tough on customers and the community.

"We have a lot of commercial fleet customers who come in here, there’s the Olympics, and we do a lot of volume with residents and visitors," he said. "It’s going to be tough for the city of Whistler, I think personally, as a consumer it will be tougher to get fuel in Whistler."

Samaris adds that these are his own opinions, and that he does not speak for Petro Canada.

Petro Canada did not reply to several interview requests regarding their intentions for the gas station.

The Whistler Husky Market on Lake Placid will become Whistler's only conventional service station. Owner and manager Sultan Rupani says the station is already taking steps to ensure that the community’s needs are met.

"We’ve been looking into our delivery schedule and into bringing in more shipments, and we’re on that now, as well as working on strategies to take care of the issues that might develop," he said.

As well, he is suggesting that residents could make things easier by getting gas after hours, outside of commute times. "People can come after hours and gas up when there are no lineups or anything, that would be a good thing for everybody," he said.

As well as the Husky, United Petroleum Products and Sabre do have a cardlock facility on Mons Road, just north of Spruce Grove.

According to Heather Kozar, assistant manager for the cardlock facility, there has not been a spike in the number of clients using their facility – at least not yet.

"I don’t know if we’ve seen a significant increase, it’s been steady for new users and we’ve been here for a few years now so people know we’re here," she said.

When the Petro Canada closes, she says there is potential to grow.

"We certainly hope so, for our sake," she said.

Anybody can apply to use the cardlock facility, individuals and businesses, if you qualify after a credit check.