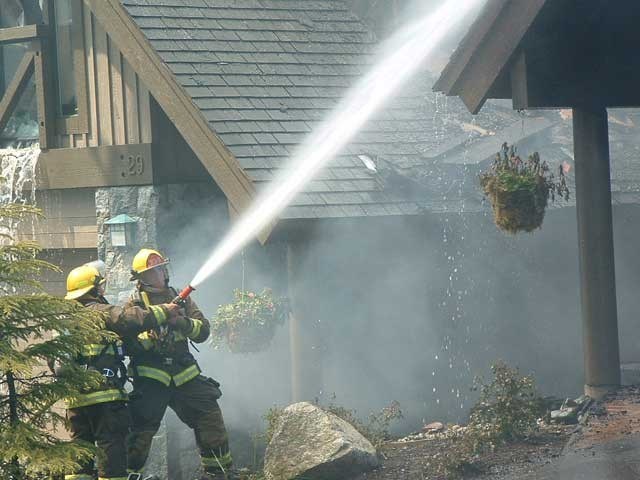 Alarm Bells. Fire teams work to put out a blaze on Pinnacle Ridge on Monday, which authorities are treating as suspicious.

The blaze that severely damaged four Pinnacle Ridge condominiums Monday is now being treated as “suspicious.”

Whistler Fire Rescue Service issued a statement Wednesday that preliminary investigation of the fire has “uncovered some discrepancies that raise some questions concerning how the fire may have started.”

The RCMP has been notified and the Office of the Fire Commissioner was sending a representative to Whistler Wednesday to assist in the investigation.

The fire started late Monday morning in a fourplex condominium unit on the Blackcomb Benchlands. Whistler Fire Rescue Service received the call at 12:10 p.m. Monday and by the time firefighters arrived on the scene the blaze had spread through the roofs of units 28, 29, 30 and 31.

The units were unoccupied at the time. There were no injuries as a result of the blaze. No evacuation order was ever given.

Cedar shake roofs on the wood-frame condominiums made for a stubborn blaze that firefighters had under control by 3:15, but the fire wasn’t suppressed until 8 p.m. Firefighters returned again at 10 p.m. Monday to control hot spot flare ups.

With the fire hazard already rated high and a breeze blowing Monday, firefighters were concerned about the blaze spreading to nearby trees or other buildings in the densely built area below Blackcomb’s Base II. Embers did blow onto the roof of unit 43, on the opposite side of Glacier Drive from Units 28-31, but damage was minimal.

In addition to Whistler Fire Rescue Service personnel, Whistler-Blackcomb’s forest fire team responded to the call. They utilized water from Blackcomb’s snowmaking system to keep the surrounding forest wet and prevent the fire from spreading.

Approximately 24 Whistler firefighters attended the scene. Six fire engines and one rescue truck also attended in what was one of the largest fires Whistler has seen in some time.

There are approximately 60 units in the Pinnacle Ridge complex on Glacier Drive. The wood and stone condominiums are valued at well over $1 million each.

Initial estimates of damage are $2 million to $3 million, but that may climb.