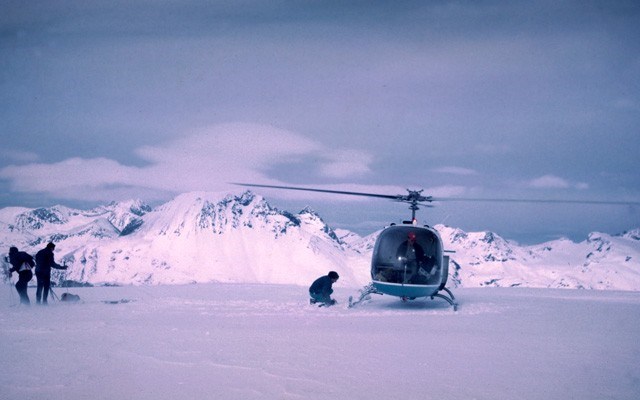 DREAMS OF DECKER Pacific Ski Air staff unload from a helicopter onto Decker Mountain. Photo By Cliff Jennings / Courtesy of the Whistler Museum

As new as the concept was, Jamie Pike acknowledged bringing heli-skiing to Whistler didn't feel like a trail-blazing feat in the moment.

Canadian Mountain Adventures founder Hans Gmoser started exploring the Bugaboos in the Purcell Mountains in the province's southeast in 1963 and had a commercial two-week heli-skiing season in 1965.

"I don't think we realized quite how new it was," Pike said following a presentation he gave along with Jennings on Whistler's first heli-ski operation as part of Whistler Museum's speaker series last month. Whistler was the first ski resort to offer heli-skiing.

"We knew that (Hans) Gmoser had been getting a fair amount of publicity in the previous three or four years, both on his test runs and finally commercially," said Pike.

"We just considered it a normal happening. It's only in retrospect I realize how close to the edge of things we were."

Pike explained advances in helicopter technology, particularly the introduction of the Bell 204B in 1961, which was adept at high-altitude flying, made the dream a reality. He added McPherson was eager to get on board with the company.

"There was an enabler, who was Carl Agar (the founder of the Okanagan Air Service, which later became Okanagan Helicopters) who really made mountain flying possible and normal. The guy who capitalized on that was Gmoser. In the Whistler case, the enabler was Glenn McPherson and Joe Csizmazia was the one that really got things going," he said.

Pike noted it was McPherson's wife Marcia, not McPherson, that was the big skier in the family, skiing into her 80s.

"She certainly had persuasion if he needed any persuading," he said. "He was a very terrific guy and stood fully behind it."

While heli-skiing itself hasn't changed all that much in the intervening half-century, Pike explained the biggest change was the demand for fresh powder skiing, and those who ride it have become choosier.

"Powder skiing was not as big in those days and fewer people powder skied, but those that did were keen and willing to pay what seemed like a lot at the time — $120... for a half-day," he said. "The people weren't super powder skiers so they weren't demanding steep stuff, just stuff they could ski down."

Pike recalled a blustery day scouting potential locations initially, cruising around and pondering which would make for the best business and safest results. He recalled the east side of Decker being his favourite, as it provided a challenge and "nice terrain."

"We spent two or three hours looking at potential runs and trying a few of them," he said. "Safety was the big thing. We were really conscious of the fact that if we had a problem, it would be a big problem, so we wanted to keep on relatively modest slopes and away from any crests... basically getting rid of as many objective hazards as possible."

The company operated for two seasons before folding. Pike explained heli-skiing was still in its infancy and not profitable enough, but also noted he had his day job as a salesman with IBM in Vancouver and had a young family at home.

"It was a matter of not giving it the proper care and attention to make it go. It was probably 10 years later when it became commercial," he said.

But his day job didn't always get in the way — one of Pike's favourite stories was when he happened to be in town on business and managed to succeed at both in slightly unusual conditions.

"IBM was having a kick-off sales meeting with the president of IBM Canada there," he said. "We broke early and I had an urgent message from my secretary, so I called her and she said 'We've got customers, no guide and the helicopter's leaving the airport in 10 minutes. Can you get over to the helipad at Park Royal?'

"I did, in my business attire and briefcase and whatnot... I went in and changed into ski clothes and eventually dropped down and I was your ski guide for the day.

"Transformed in a phone booth," he added with a chuckle.

When heli-skiing later became more popular, John Hetherington was one who picked up the ball and ran with it in the 1980s when he returned to Whistler from Invermere after eight years away.

Hetherington, in particular, brought avalanche experience to the table having worked in numerous ranges including the Selkirks, the Purcells, the Rockies, the Coast Mountains and the Monashees.

He was teaching a course with heli-skiing pioneer Herb Bleuer in late 1982 when Bleuer invited him up to help out Whistler Heli-Skiing, which started up the previous year.

"Herb said 'Why don't you come out and do some guiding for us?'" Hetherington recalled. "I wasn't doing anything else that winter. It was my first winter back in Whistler, so I just made myself available. Because I was available, they kept phoning me. By the end of the winter, I was pretty much full-time and the next year, I had an opportunity to get in on the business."

Hetherington served as a guide for roughly 25 years and had a stake in the company for about 20.

He noted heli-skiing was still "pretty small" when he got involved but in the next decade, a low Canadian dollar and the dot-com boom brought a flood of rich Americans, primarily Californians, to Whistler. Many of them sought an extreme experience.

"The ski resort hadn't gone through the big '90s boom phase yet. It looked like it was going to be a good opportunity — and it was. When I first started, we had one helicopter and at one point, we were running five, sometimes even six helicopters," he said. "There was a point when we were running 120 people a day on really good days. That didn't last too long.

Hetherington said while the company didn't market all that widely, it gained a reputation as one that would reach higher to serve its clients.

"People would often do extra runs — five, six, seven runs a day," he said. "We were pretty flexible and the flexibility helped a lot."