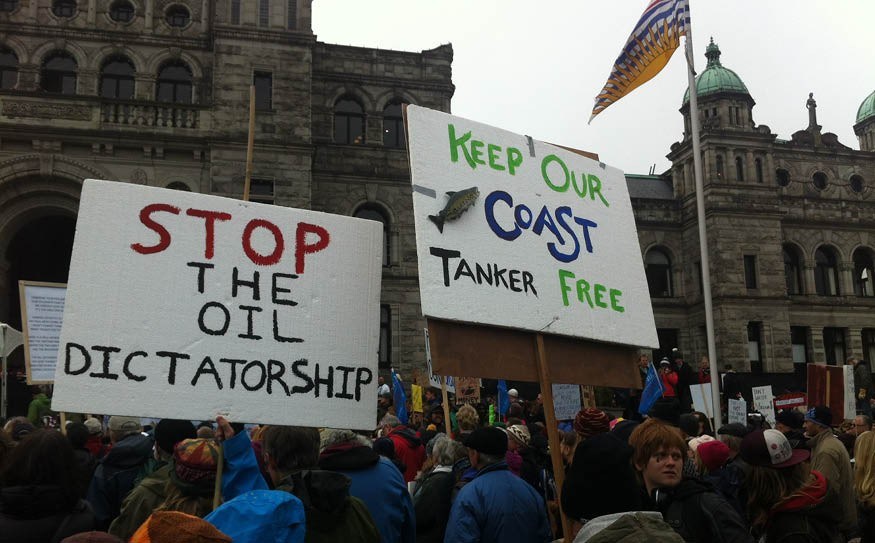 pipeline protest Thousands gathered on the front lawn of the B.C. Legislature Monday to voice opposition to plans to build energy pipelines in the province. Photo BY Leslie Anthony

The granola-eaters were... eating granola. And yoghurt and fruit and other Whole Earth fare. The rest of us chased the 7 a.m. cobwebs with bacon and eggs aboard B.C. Ferries' Queen of Somethingorother transiting between Tsawwassen and Victoria.

In front of me sat an elderly First Nations woman with hands as large as paddles, work-wrinkled knuckles like pine whorls. She had a beatific look and chatted amiably with the fashionista, twenty-something granddaughter escorting her — a picture of inter-generational solidarity.

Against the wall, a woman sat cross-legged in a blissed-out Lotus, eyes closed and fingers touching, ignoring the swirl of kids excited to be out of school. Around her sat business suits, MEC rain jackets, woolen ponchos and parkas with union logos. Folks were on their phones, their laptops or sitting in circles going over how to get arrested peacefully. It wouldn't come to that but they were ready.

I noticed all this because when you're heading to a protest it's normal to check out those with whom you're expressing solidarity, dropping your everyday judgments to give a free pass of association.

We flowed off the ferry and into a stream of 4,000 people to make Monday's Defend our Coast action at the B.C. legislature an unprecedented display of provincial unity, or, as one wag put it "what a healthy democracy looks like."

The day started with moving introductions from First Nations leaders that focused on the reasons we stood together in the cold.

Speeches from a broad range of critics followed — strong on We're Not Gonna Take It but light on why that might be.

Gazing over a sea of signs like "There is NO Economy on a Dead Planet" and "There is no PLANet B," however, speakers were perhaps apprised of the collective awareness in a crowd that clearly didn't buy the economic fear-mongering emanating from Ottawa (or the Fraser Institute, that very day). Here were 4,000 people who knew that the environmental risks of the ENG project were too large to even be measured; that even if the significant impacts of pipeline construction could somehow be managed, the subsequent risks of transporting tar-sands bitumen diluted with highly toxic condensate would skyrocket, and that even a small spill would be catastrophic. Examples were legion: the Enbridge pipeline rupture that leaked three million litres into Michigan's Kalamazoo River saddled hundreds with respiratory, gastrointestinal, and neurological symptoms and left 60 kilometres of water, sediment and wetlands contaminated; the Pembina rupture a decade ago put one million litres into the Pine River in northeastern B.C., killed thousands of fish and contaminated the water supply of Chetwynd. More insidiously — prescient of how governments might handle an ENG spill — was the 4.5 million litres of bitumen that soaked into the Peace watershed of northern Alberta on April 29, 2011. Oddly, it wasn't until the day after the May 2 federal election that the magnitude of the spill was reported.

This last incident was retold at the rally by Melina Laboucan-Massimo, a Cree from northern Alberta who testified in March before the U.S. Congress about how spills have affected the health of her family and impacted a previously sustainable way of life. Despite speaking of it many times, Melina was moved to tearful summation: "Our land and people will never be the same."

May rightly connected the pipeline projects to the secretly penned 31-year agreement on investment with China, pointing out how the document would make it difficult to stop resource mega-projects without being sued by Chinese state-owned companies. "Christy Clark," she said poignantly, "get yourself a lawyer."

It wasn't lost on a crowd brandishing signs like "Tarper" and "Chairman Harpo" that communist China and our libertarian PM share odd-couple common purpose and ideals: short shrift to workers, unfettered and unregulated capitalism, scathingly low corporate taxes, and little or no environmental oversight.

Early on, Tsleil-Waututh First Nation's Rueben George had stirred the crowd. "We're winning," he'd begun to loud cheers, noting that pipeline opposition needed to be rooted in values surrounding the sacredness of land and water. "There's no price we can put down on these things," he said, stating that his band was going to oppose the pipeline for their children, and the children of all in attendance.

Then, noting that the folks behind the pipeline were too blinded by greed to soberly consider the future, George made the most inclusive gesture of the day.

"And we're going to [fight] it for their children, too."

Behind me, a pair of large hands slapped together like wood.