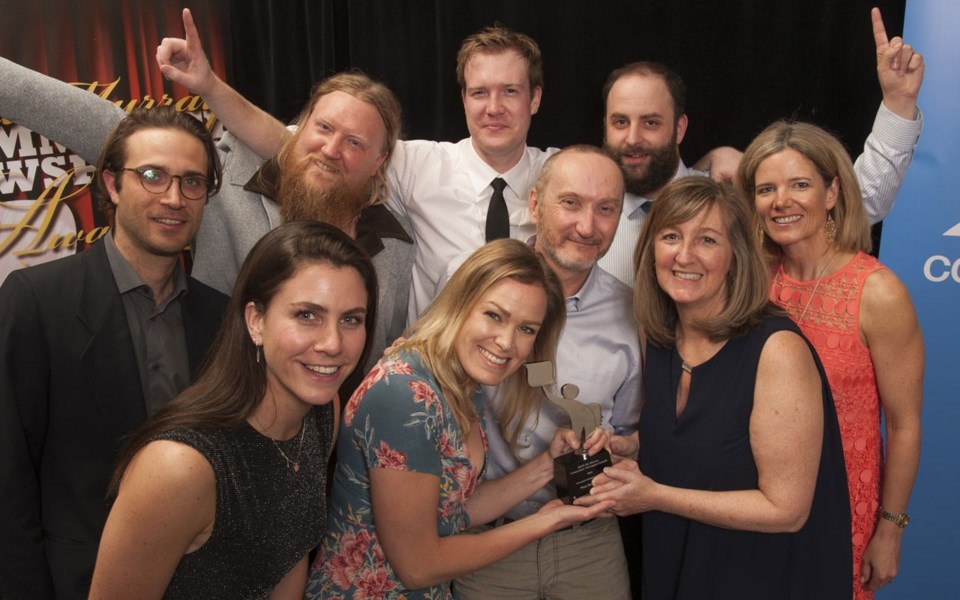 Whistler's Pique Newsmagazine is "slick, stylish and dynamic," and "ticks all the boxes" of a community newspaper, according to judges with the BC and Yukon Community Newspaper Association, who awarded it first place in the Newspaper Excellence category for its circulation class at the annual awards event on April 28.

Once again, Pique led the way, not only for parent company Glacier Media Group, but for all papers in B.C., with 11 awards, including seven golds, two silvers and two bronze, including the gold award for Newspaper Excellence.

"Everyone at Pique, in every department from editorial, to sales, to production takes great pride in our community newsmagazine, and winning these awards across so many categories is a recognition of the dedication of the team," said editor Clare Ogilvie. "We are truly honoured."

Said the judges: "The story itself is frightening and frustrating, exposing gaps in the ability of police to not only investigate the crime of drink drugging and sexual assault, but also to simply record the number of occurrences.

"The survivors in this piece clearly trust the reporters, and this piece shows that commitment beautifully."

Reporter Joel Barde was awarded gold in the feature-writing category for "The Last Hunt," the story of one of the last grizzly bear trophy hunts in B.C. He also took home a second gold for Outdoor Recreation Writing for his feature "A Century in the Mountains," which tells the story of the UBC's Varsity Outdoor Club and its contributions to B.C. mountaineering.

The gold award for Environmental Writing went to Pique contributor Leslie Anthony for his feature "Sharing Snow," which delves into the often conflict-ridden relationship between winter backcountry user groups.

Braden Dupuis took home the bronze award in the feature-writing category for "No Vacancy," which sought to lay out all sides of the housing crisis in Whistler.

Pique also won gold for the Special Section category with its "Best of Whistler 2017" feature designed by Pique's art director Jon Parris and written by the editorial team.

Contributor tobias c. van Veen took home silver for his photo essay, "Sleeping through the Dream," which was also designed by Parris.

Our production and design department took multiple awards. Lou Stevens won gold in the Newspaper Promotion for "Kisstler," which appeared in the now-closed Whistler Question. Said the judges: "This entry is all kinds of fun. Beautifully designed, and a great promo for both the paper and a great way to show off the residents and the beauty of the community."

Claire Ryan of Pique's production department took home a silver for the Ad Campaign category for her work on the "Dumbo Love" campaign at Sushi Village.

Said Pique publisher Sarah Strother: "I'm so proud of this team that continues to innovate and deliver an exceptional newspaper in both print and online. Our writing, news reporting, design and artwork all contribute to our overall general excellence and it's wonderful to be recognized by our peers at BCYCNA."

The BCYCNA is a non-profit membership organization representing 119 community newspapers throughout British Columbia and the Yukon, with a combined readership of almost 2 million.