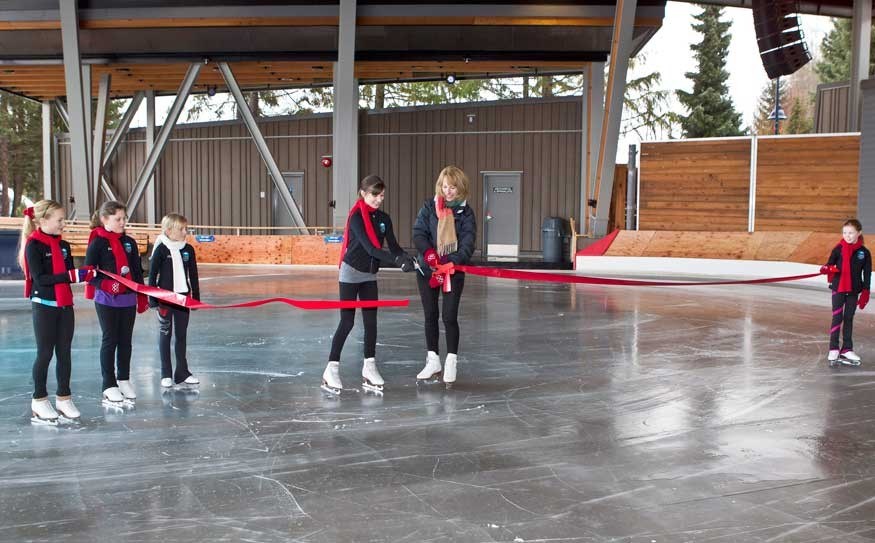 The new permanent ice surface, under the plaza pavilion and stretching onto the Great Lawn, will cost Whistler roughly $60,000 to run annually.

Council learned about the costs at Tuesday's council meeting during a presentation updating it on the $1.4 million capital project that will see a permanent refrigerated surface in the village, following last winter's successful pilot project.

He then asked: "Has the project manager had a chance to look at our budget and does he think it's realistic?"

The answer from municipal manager of resort parks planning services Martin Pardoe was: "Yes he does think it's realistic."

The $1.4 million in capital money is coming from Resort Municipality Initiative (RMI) funding — provincial grant money this year totaling more than $6 million that is dedicated to boosting tourism in the resort.

Last year 17,000 skaters took a turn at the new amenity in a three and a half month time period. And 14,000 people rented skates.

Pardoe explained that the operational costs are pegged at $130,000, which accounts for staff time to run the facility and the estimates of hydro costs.

With roughly $70,000 expected in revenue — the facility is free but there is a charge for skate rentals — that reduces the net cost to Whistler by half.

Construction is slated to begin following September's GranFondo race with an opening date of some time in December.

Garbage, safety on River of Golden Dreams on council's radar

At the request of council, staff will be asking the RCMP about what can be done about the littering and the drinking on the River of Golden Dreams. At the request of tour operators, police did patrol the area this week, but council is looking for a permanent solution.

Councillor Jayson Faulkner raised the issue at Tuesday's council meeting. "It's really a drag to kind of have to ruin the party, but..." he said.

Last week when he was on the river he saw about 25 rubber rafts with people in various states of inebriation floating down the popular waterway.

"If I was king of the world I would ban the sale of these rubber rafts in the municipality," said Faulkner.

The other issue is that when people learn the RCMP are on the river and handing out tickets, they start throwing their booze overboard.

Municipal CAO Mike Furey said he would raise the issue with the RCMP.

Whistler guests and residents won't be pulling up in their cars to order a meal or grab a coffee.

Council has set the ball rolling to ensure Whistler's official definition of restaurant does not include drive through windows.

When asked it that was part of definitions in other jurisdictions, Mayor Nancy Wilhelm-Morden said she didn't know about elsewhere, but the change works for Whistler.

"Here it makes sense," she said after Tuesday's meeting which included a motion to direct staff to work on the bylaw change. "We don't really want drive throughs so we going to define restaurant and we're going to make sure it includes no drive throughs."

Wilhelm-Morden said the oversight was spotted during a review of the zoning bylaw. There are no applications pending, she added, that include a drive through.