Police deal with several violent incidents on May long weekend

Man reportedly slashed in face outside nightclub
May 19, 2014 3:00 AM By: Brandon Barrett 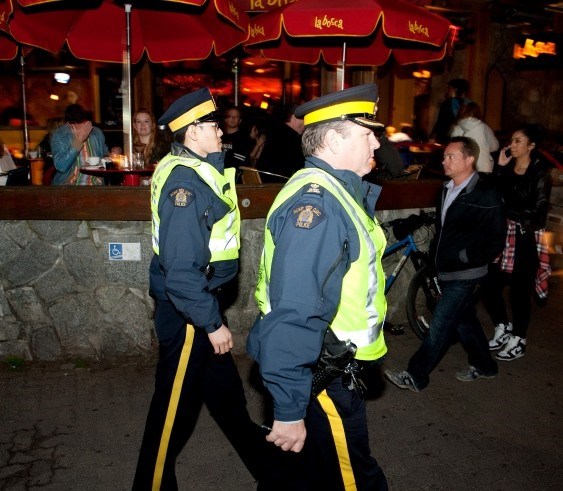 Despite an increase in police presence this May long weekend, RCMP had to deal with several violent incidents this year. Photo by David Buzzard www.davidbuzzard.com

The first major incident was reported to officers on foot patrol at around 7:30 p.m. Saturday, May 17 near a hotel in the Upper Village. Police were approached by a male who advised that another man had been assaulted by a large group of South Asian males outside the hotel. Officers observed a male victim bleeding from his head. Several other males in the area that police believed could have been involved were questioned, but they claimed otherwise, police said.

The victim was uncooperative, and refused to provide any information said Staff Sgt. Steve LeClair.

Soon after, an unknown person told police there was a stabbing in a room of the same hotel. The victim was located by officers and appeared to be in medical distress, but, said LeClair, the man exhibited no obvious signs of beings stabbed.

"He didn't want to provide any details to the police or receive medical attention," LeClair said. "All parties were uncooperative."

All of those involved in the incident were 18-year-old males from Surrey, police noted.

At around 8:15 p.m. RCMP received a call from a complainant who observed a fight involving between 20 and 25 people in the 2200 block of Brandywine.

During the altercation, taxis arrived and drove several individuals away from the scene, said police. At that time, the remaining members of the group were locked out of a residence and observed banging on the door.

A man was then seen brandishing a knife before he was pulled back inside the house. He was later observed stabbing a telephone pole.

Police said a female was also seen by the door of the house before being "pulled back in by the throat," LeClair said.

The suspect who allegedly grabbed the woman by the neck, a 17-year-old Surrey male, left in a cab but was later arrested and found in possession of bear spray and a pellet gun. RCMP is recommending weapon possession charges.

Later that night, a doorman from a village nightclub advised police that a man was stabbed in front of the establishment. Officers attended and observed the victim with a slash down the right side of his face.

The victim, a 19-year-old man from Surrey, was intoxicated and said he did not know the identify of his alleged attacker. He nonetheless provided police with a vague description of a South Asian male of medium, stocky build, approximately 6-ft. in height, wearing a blue plaid shirt, jeans, with short spiky hair and a short, full beard. The victim said the suspect also suffered a black eye in the fracas.

Several males matching the description were questioned by police throughout the night, LeClair said. However, none were believed to be the suspect.

Another incident involving a knife was reported at a Pemberton hotel earlier in the day, police noted, when staff advised that a man had pulled a hunting knife on an employee in the fitness area of the facility.

A 30-year-old Vancouver man was arrested on charges of weapon possession, police said.

Despite the reported incidents, LeClair said police have "a handle" on the situation and believe that Whistler locals are safe.

"We have to continue with our higher visibility, and our proactive approach," he said.

"We intervened in numerous incidents (Saturday) night where we could tell tensions were building between different groups. We arrested numerous people who were intoxicated and aggressive, and we're going to go back out there (Sunday night) doing the same thing.

"You look at the patterns; it's typically young males from the city who are having problems with each other," he added. "It's unfortunate there are a few groups of individuals causing problems, but I believe the public is safe."