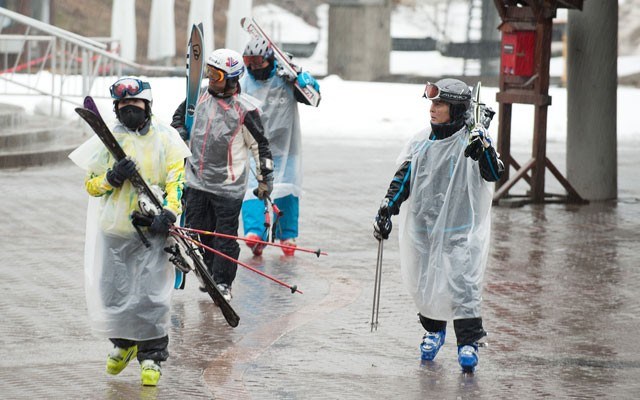 Stay dry Four die-hard skiers hope for the best in the wet weather on Wednesday, Dec. 10. Photo by David Buzzard/www.media-centre.ca

Even as Whistler Blackcomb (WB) grappled with rains to the peak and high winds Tuesday, prompting the closure of lifts and early ski school pick up, plans are moving full-steam ahead in preparation of the busy holiday season.

In one case, high winds swung an Excalibur Gondola cabin off its running rail after the grip moved. The cabin was located in the top terminal of the Excalibur's upper line, said Whistler Blackcomb in a release.

The lift stopped on an automatic safety and there was no damage, just a minor delay of 25 minutes as staff reinstalled the cabin.

Whistler Blackcomb added there were no guests in the gondola at the time. The gondola remained closed following the incident.

But despite the less-than-ideal start to the winter season in Whistler, it's not time to push the panic button yet, according to ski retailers.

"The great thing about being in Whistler is that everyone knows the snow is coming, and everyone here is so enthusiastic about skiing and snowboarding that they're going to buy gear anyways," said Carlos Strachan, general manager of Comor.

Comor recently reopened after a month spent without a location — the retailer was displaced in last year's fire at its original location in the Tyndall Stone Lodge building, and spent the last year in temporary retail spaces.

"We just rebuilt our store, and were hoping that the snow was going to be here so we could jump right into our winter, but it has been a bit of a slow start," Strachan said.

"If it continues much longer, that's when we start feeling it, because people start cancelling their vacations and not coming here for Christmas," he said.

"Once we've lost that December business, we're not getting it back in January. Those destination people have gone somewhere else."

"American Thanksgiving was good, but since then we definitely have noticed less people in town for sure," McDonald said.

"(But) there's no worry at all. The weather forecast looks like it's going to get cold, and I haven't heard any stories about anybody cancelling their trips yet."

According to Tourism Whistler, bookings for the winter season are still on par with last year, which was the busiest on record. On Tuesday, heavy winds with gusts of up to 145 km/hr at the Roundhouse led to the closure of all lifts at Whistler Blackcomb.

"(WB) has been able to address challenging early season conditions with our state of the art snowmaking system that has allowed us to consistently open early and in this season has provided a ski out to the valley by the beginning of December," said Michelle Leroux, WB's manager of public relations and communications, in an email.

WB isn't focusing on developing a huge number of indoor activities because skiing and snowboarding are at the core of what it does, Leroux said.

"For activities that don't place people in the elements or rely on snow, there is the option to sightsee via the new Whistler Village Gondola and onto the PEAK 2 PEAK Gondola. Both lodges anchoring the P2P offer exceptional sit down dining experiences."

While the weather has yet to fully cooperate, weekend holiday activities are still on the schedule at the Resort Municipality of Whistler and WB.

Outdoor skating at Whistler Olympic Plaza is set to open on Saturday, Dec. 13, while WB's annual Dress Like Santa day — where the first 75 people to arrive at the GLC dressed to ski like Santa and Mrs. Claus will receive a free lift ticket for the day — is also a go.

WB is also offering its 12 Days of Christmas deal packages, with daily deals offered on hotels, spas and more.

There is a multitude of other holiday activities scheduled in the coming weeks as well — check with www.whistler.ca, www.whistlerblackcomb.com and www.whistlerolympicpark.com for more.