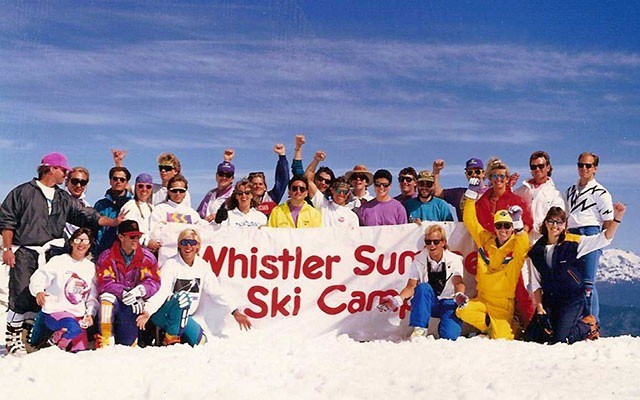 SUMMER LOVIN' Summer ski camp started on the Whistler glacier and ran for years, schooling kids and adults on racing, and other activities such as putting peanut butter on skis. Photo courtesy of Alex Douglas

Their stories are like something out of the Wild West during those early years of the Whistler summer ski camps. Big-name skiers, such as Toni Sailer, Dave Murray, Jim Hunter, Nancy Greene and Wayne Wong coached thousands of kids who were eager to ski and learn alongside their heroes.

It was the best of times.

"It was so much fun — I've never laughed so much, or cried so much," said ski historian Alex Douglas, who has organized a 50th anniversary celebration in Whistler for all the summer-camp coaches with a speaker series on Friday, May 6, with Alan White, Greene and Mark (Skip) Taylor, and a reunion dinner at Creekbread on May 7.

The camps started in 1969 and there was nothing else like it.

"It was the one summer camp right from the start that continued every year and I think that's the thing that makes it special," Douglas said.

Kids from across North America came to spend the summer on the Whistler glacier to log vertical and master their racing skills. That was their day job. The late afternoons and evenings were spent playing volleyball, or biking, or swimming at Lost Lake, having barbecues, and likely never missing their parents or their homes.

"I've always said about summer camps that we ate, slept and went to the bathroom together because you actually lived with the people," said Douglas. "In the early days, there was no news, no TV, newspapers were a day-and-a-half late, but why read the paper? You were just having so much fun."

Douglas said he was lucky enough to start as a camper and basically begged and pleaded until they hired him as a staffer.

"My hero was Wayne Wong. When I came out in '73 and I heard he was going to be part of the camp, I had to get there," said Douglas. "I was this kid from Ontario and next thing I know I'm bunking with the freestyle champion of the world."

Douglas told the story of walking up to the rope tow one day. And walking alongside him is another of his idols, Jim Hunter, a member of the Canadian Alpine Ski Team from 1970-77.

Douglas went from camper to counsellor, often picking up kids at the Vancouver airport for the trip to Whistler. What went down at camp could never be pulled off today.

"Compared to today, there wasn't the super-duper sort of counselling and legality. We didn't have parents sign 20 pages of legal waivers," he said. "That was one of my biggest fears, that we'd have to phone some parent with bad news. But that didn't happen."

Douglas said there were injuries, everything from cuts and scrapes to broken legs.

"If you hurt yourself up there and didn't fly out, it was two hours before you got to the valley floor," he said. "I broke my leg in '73 and luckily I got helicoptered out because it was a nice day."

Back then, the coaches doubled as counsellors as well, taking care of the kids and acting as surrogate parents. Douglas said he basically did everything, as did Taylor, and part of their early summer routine was to install the T-bar for glacier access.

In the heyday of summer camp, there wer upward of 100 kids — six camps for kids and three for adults.

"It was the best team of people I've ever worked with," Taylor said, sharing a few classic sophomoric pranks, such as peanut butter on skis, dead rats — or water — in ski boots, or reassembling someone's bed outside on the deck.

Taylor's favourite activity was the massive parties on Alta Lake that involved several floating docks all decked out with food.

"It was completely hazardous," said Taylor. "It was a famous summer institution."

Taylor forged relationships and partnerships that continue to this day: Taylor is the executive producer of Crankworx and a consultant whose work takes him around the globe. In an interview from Antigua, Taylor said he's definitely down for the reunion.

"It gave me the best work ethic ever. We started at 5:30 in the morning and finished at 11 at night," Taylor said. "It gave me the opportunity to work with really great people."

There were thousands of campers throughout the years.

One day Taylor walked into a surf shop in California where a six-foot, six-inch (198 cm) dude behind the counter asked: "Are you Skip Taylor?"

Taylor laughed and said: I still bump into people who went to camp."

The May 6 speaker series takes place at Whistler Museum, doors at 6 p.m. and speakers at 7 p.m. Tickets are $10, $5 for museum members. There will be a cash bar. For more information on the reunion, go to Facebook to the ToniSailer/DaveMurraysummerskicamp page.