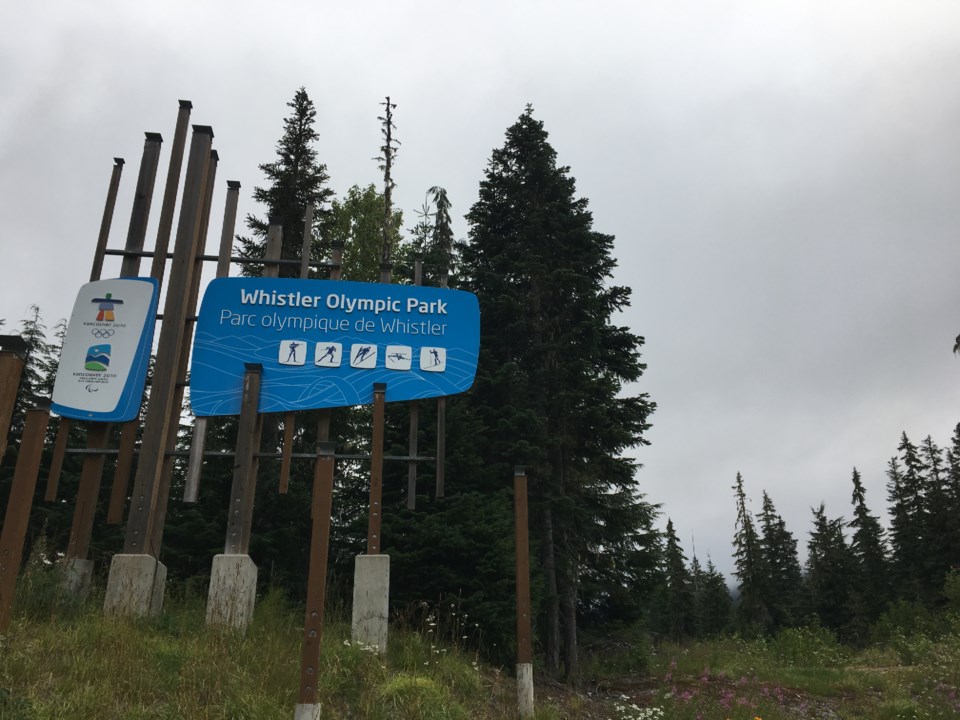 A rezoning application for campsites at Whistler Olympic Park in the Callaghan Valley is “premature,” according to the Resort Municipality of Whistler. Photo by Braden Dupuis.

A rezoning application from Whistler Sport Legacies (WSL) for new camping facilities at Whistler Olympic Park is “premature” in the eyes of the Resort Municipality of Whistler—and prompting renewed discussions about grizzly conservation and public rec access.

The application to the Squamish-Lillooet Regional District (SLRD)—for which a virtual public hearing was held on Aug. 11—seeks to add 26 tent sites and 20 RV sites for seasonal camping between May 15 and Oct. 31.

The campsites were first mentioned in the park’s original master plan, said Whistler Sport Legacies president and CEO Roger Soane, though WSL only started talking about the project a couple of years ago.

“We were looking at different things, but we felt that this was a good first step into a year-round activity that keeps the venue going and adds a little bit of revenue for the legacies,” Soane said.

In a written submission to the SLRD, the Resort Municipality of Whistler (RMOW) raised several concerns with the proposal, including the lack of plans related to wildfire management, wildlife protection, emergency response, and for the Callaghan Valley as a whole.

“Regardless whether additional recreational opportunities in the region may be desired and/or appropriate, and the need for WOP to maintain and sustain operations with a range of revenue streams, there is not yet a plan that would consider how this proposal, and future subsequent proposals from other applicants, can be managed holistically,” concluded the letter signed by general manager of resort experience Toni Metcalf. “Approving this application without consideration of the overall plan for the Callaghan Valley at this time seems premature.”

In a presentation at the public hearing, SLRD planner Alix MacKay noted that the length of stay at the campgrounds would be capped at 30 days, waste and wildlife would be managed in accordance with the SLRD’s wildlife attractant bylaw, and an on-site caretaker would be available 24 hours a day.

The SLRD’s campground bylaw does require a detailed fire protection, safety and emergency management plan, “and that’s actively being worked on by the applicants,” MacKay said. “[That] will be brought forward along with a staff report prior to third reading and adoption of the bylaw.”

As for the sub-area planning process for the Callaghan Valley, it’s not currently on the SLRD’s work plan, MacKay added, due to the fact that users in the area are largely non-intensive, and much of the valley is under longstanding tenure.

“The Official Community Plan does already contemplate this overnight accommodation use, so it’s not a new commercial use that’s being proposed,” she said.

But in the view of local outdoor rec advocate Steve Jones, the application shouldn’t have reached the public hearing stage in the first place.

“I’m worried that this proposal could be approved based on a condition that there’s a wildlife management plan or a wildlife management assessment,” Jones said at the public hearing, after listing off some of the government and conservation agencies that have been working to protect the recovering grizzly population in the Callaghan in recent years.

“Having an approval and just saying, ‘Well you need to have a plan after,’ has been shown time and time again this is basically rubber stamping the project.

“So I really believe that an assessment must be completed prior to a [second] public hearing. Until we have the assessment we can’t actually, I don’t think, really consider this proposal.”

A second concern of Jones’—the continued erosion of public access to public spaces—is shared by more than a few.

An access road to Madeley Lake on WSL’s Callaghan tenure was recently gated, which “has effectively cut off public access to the lake and the trail to Hanging Lake and Rainbow Lake,” wrote Doug Wylie in a submission to the SLRD.

Though it has been left open in recent years, the road in question was decommissioned in 2012, Soane said.

“There was one too many parties out there, and people not picking up after themselves, so we said we need to close it for vehicle traffic,” he said. “We haven’t stopped people walking in.”

But the loss of yet another access point speaks to a larger issue in the corridor, Wylie said.

“What’s been happening in the Whistler area is you can look at Mount Brew, Brandywine Meadows, Madeley Lake, Tricouni, Singing Pass, 16 Mile Creek, Black Tusk, Jane Lakes, Ancient Cedars—that’s pretty exhaustive, but probably not complete—but every one of those places is subject to deteriorating road access, or gated roads, or private operations that sort of work against public access,” he said.

The rezoning bylaw will come back to the SLRD board for third reading on Aug. 26.