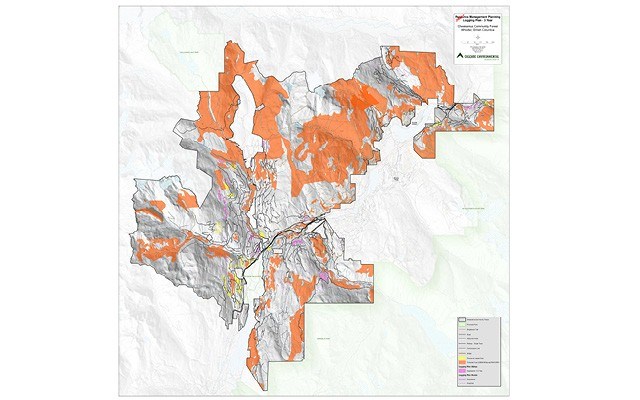 Logging plans for the Cheakamus Community Forest (CCF) were presented at an open house this month and they revealed an increase in the volume of timber proposed for harvest in 2016.

In all, up to 36,500m3 of forest could be logged this year, well above the 21,000m3 annual allowable cut set in place by the B.C. Government. The high figure is to make up for the low amount of timber harvested in 2015 — roughly 5,000m3 — and allows for flexibility to accommodate shifting weather and market conditions.

"We put (36,500m3) in the plan because we don't know where we're going to get cutbacks and where the projects are going to go," explained CCF operations manager Tom Cole.

Roughly 60 per cent of the timber included in the 2016 harvest plan will be old-growth forest, Cole said, classified in B.C. as any tree over 250 years old. While the CCF has several measures in place to protect old forest, like the 27 Old-Growth Management Areas determined by the province this summer, the longstanding challenge for foresters is finding trees that meet the threshold to be economically viable. The CCF has a target goal of protecting between 30 and 40 per cent of its forest from logging.

"A significant amount of the old growth is being preserved, but that said, our forest is of such a composition that our second-growth isn't mature enough to log, so the CCF is forced to go into old growth to meet the (annual allowable cut) requirement," said Mayor Nancy Wilhelm-Morden, who sits on the CCF board. "Personally I'm not happy about that, but I am happy with the significant amounts that have been preserved."

For the Association of Whistler Area Residents for the Environment (AWARE), the stance has remained the same for "many years," explained executive director Claire Ruddy.

"We would like to see (the CCF) phasing out old-growth logging," she said. "We believe that logging old forest here in a tourism-centred economy is not the highest and best use of our old forest."

"One of the issues we're having is that we've got a management plan that says we shouldn't be harvesting our young forest until it reaches the age of 100," he said. "It's a pretty arbitrary number, but there are some benefits: For one, 50 years from now we'll probably be harvesting less than 20 hectares a year."

Preliminary long-term logging plans were also presented at the Feb. 1 meeting in Cheakamus Crossing. The one- to three-year draft includes plans to log in certain Cheakamus, Wedge, Rainbow and Powder harvest sites, while the four- to 10-year plan will likely be concentrated in the Cheakamus Valley.

Having long-range plans in place is something AWARE has been requesting for some time, Ruddy said, but she would still like to see more emphasis on the regeneration of the forest over the long term.

"It would be great to see them go even further," she said. "We're talking about regeneration of forest and even trying to get our forest base back to 250 years (old). It's not clear how we're going to do that."

The non-profit society governing the CCF has adopted an ecosystem-based approach to management, a "voluntary layer" of protection that goes beyond provincial requirements.

"The goal is to identify areas of ecological, cultural or recreational importance that are protected from harvesting or would require additional consultation if harvesting is proposed," said CCF board chair Jeff Fisher.

A total of 3,841 hectares of forest have been proposed for protection through this process. Once those reserves are confirmed, 46 per cent of the CCF will be protected from harvest.