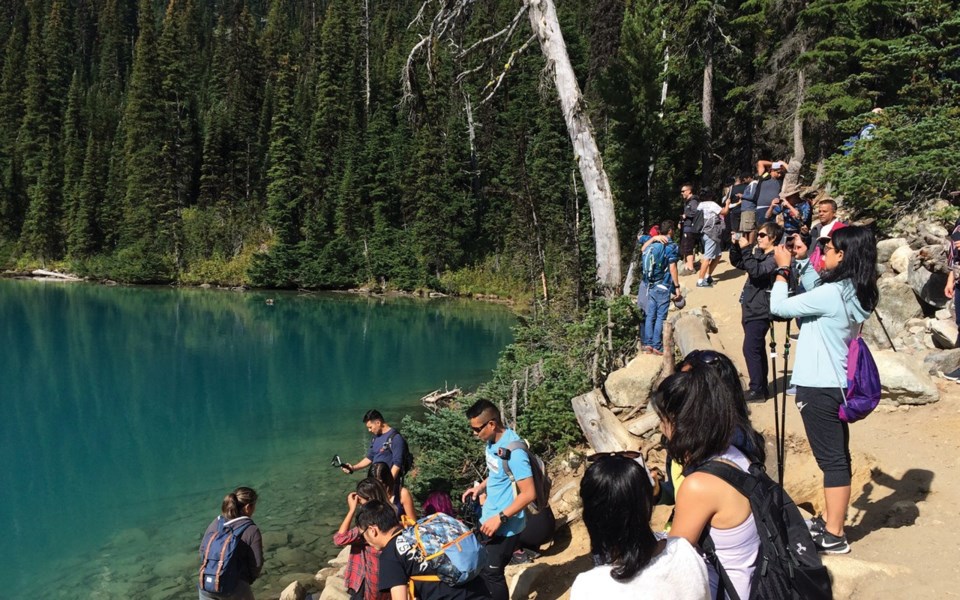 Great views On busy days, the trails at Joffre Lakes Provincial Park can be a traffic jam. The province is considering a number of measures to manage the crowds. -photo by Joel Barde

BC Parks is moving forward with the development of its long-anticipated visitor-use management strategy for Joffre Lakes Provincial Park.

It is asking the public to fill in a survey before April 30 as part of its information collection for the strategy development.

"Feedback that we gather from the survey will be used to inform management actions and develop short-term and long-term strategies," explained Jennie Aikman, BC Parks' regional director for the south coast. "(This is) the opportunity for the public to provide their input."

The park saw more than 170,000 visitors last year and has faced environmental and safety issues related to overcrowding.

The survey, found here, asks if people would be willing to pay a "day-use fee to enter the park if you knew the money was being reinvested back into the park" and if they "agree with limiting the number of day visitors in the park if it meant you'd encounter fewer visitors and you were guaranteed easier access."

For Ngaio Hotte, a PhD candidate in the University of British Columbia (UBC) faculty of forestry, the survey questions represent a willingness to consider "all the options" when it comes to managing the popular park.

In a co-written editorial that appeared in the The Province in May 2018, Hotte and Harry Nelson (an associate professor in UBC's faculty of forestry) argued that re-introducing day-use parking fees in B.C. parks could "ease the tide of visitors" while simultaneously helping the province raise funds to better manage its parks.

"(In) May 2011, then-Premier Christy Clark eliminated fees in day-use parking areas, leaving a $826,000 hole in B.C. Parks' annual budget the following year," wrote Hotte and Nelson. "The move, which was intended to attract park visitors, had the desired effect. Over the next five years, while park attendance grew by nearly 27 per cent, total expenditures on parks fell by nearly two per cent."

Speaking to Pique, Hotte said that decision took B.C.'s parks in the wrong direction. "While it was politically palatable and popular thing to do, it hurt parks," she said. "It took away some important revenue for them."

User fees are used in other jurisdictions to great effect, explained Hotte, pointing to Washington State as a prime example.

"If you want to go to Mount Baker, in the summertime, you have to have a (day-use) permit in your vehicle ... and that is a totally reasonable thing to do," she said. "It's not expensive, and it helps to generate revenue that keeps those parks going."

Hotte said it's hard to know how much money BC Parks is losing out on, as visitor numbers are difficult to calculate.

She also added that the province would need to land on a fee that is acceptable to the public and suggested that it could create special passes to keep parks accessible to families.

However, the notion of re-introducing such fees doesn't sit well with some. In a Facebook message, parks advocate Steve Jones said he's opposed to charging fees, saying it will push people to other backcountry areas with no facilities.

The goal should be to "better fund the park with existing tax revenue from the tourism industry," said Jones.

Hotte argues that many would likely be willing to pay to use an accessible and beautiful park like Joffre.

Aikman said that BC Parks appreciates the risk of bringing in user fees.

"We are well aware (that) changes to how you manage any park can have implications for parks and other lands in the area," she said.

When it comes to this summer, BC Parks is looking to institute some short-term measures to address the issues at Joffre, said Aikman, adding that the agency is working closely with the Lil'wat and N'Quatqua First Nations on all its plans.

"We are working on strategies to be put in place in the short term," she said, adding that the province has hired an additional park ranger to work at Joffre for the summer season.

"This has been a concerted effort for BC Parks and staff," she said. "We have a team of staff that are working on collaborating with the Nations to develop a strategy for addressing the visitor-use management needs at Joffre Lakes Parks ... Everybody has been pulling together to make this a priority."