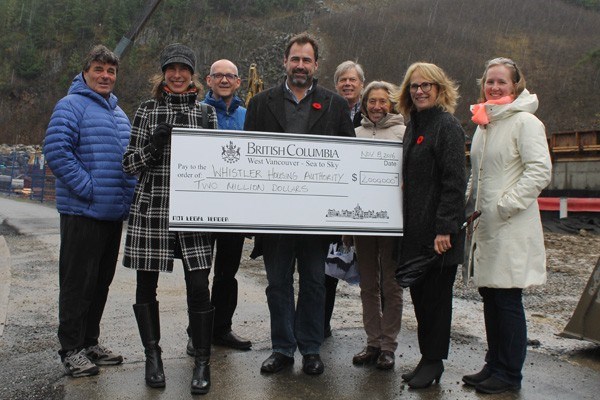 The Province of British Columbia has committed $2 million to the Whistler Housing Authority (WHA) project underway in Cheakamus Crossing.

MLA Jordan Sturdy made the announcement on Tuesday, Nov. 8 at the site of the project on Cloudburst Drive.

The funds are part of $500 million for affordable housing announced by the provincial government in September.

Sturdy lauded the work of the WHA in making the announcement.

"I use the WHA and Whistler as an example all the time when we talk about affordability, be it in any community... because they have some really useful experience that can be partially or completely applicable," he said.

"We really need to think about what the policy objective is, and it's to create opportunities for people that work and live in these communities to do so affordably."

The WHA's Marla Zucht applied for the money back in June, which will be used towards the capital costs of the project.

"The allocation of the $2 million is a big injection for us into our capital budget, enabling us to be able to create affordable rents for the workforce," Zucht said.

Whistler Mayor Nancy Wilhelm-Morden called the announcement "fantastic," especially given the timing of it.

"This is an issue that is very important to this community," she said.

"It's fantastic that the province is making that investment here in Whistler, and yeah, we're very, very pleased to receive this grant."

On Nov. 7, Wilhelm-Morden and the rest of the Mayor's Task Force on Resident Housing met at municipal hall for the first time.

"It was really heartening to see and hear the passion that these representatives of various organizations in the community have about housing," Wilhelm-Morden said.

"Ben Smith has about a 20-year history of working in real estate development and sales, so he's very well versed in the real estate market in the Lower Mainland and to a certain extent here," Wilhelm-Morden said.

"Terry Deutscher is retired, he was on the education and learning task force. He's got a very, very solid and impressive business resume. He was a business prof at the University of Western Ontario for many years, so he brings an analytical mind to the table."

The first meeting was mostly about introductions, the mayor said, but some short-term housing initiatives were discussed as well.

"Just in broad general terms I can say that linking business with potential landlords was discussed at length, (and) we talked about holding a forum so that we can speak to some of the young people who are going through some of the issues right now, and hear what the have to say about the issue and about potential solutions," Wilhelm-Morden said.

For example, there has been talk about bringing the Chamber of Commerce on board as a type of rental facilitator for businesses.

Second home owners who don't spend much time in Whistler could rent their homes to businesses rather than employees.

"So there would be the backing of the reputation of the business to ensure that the landlord was comfortable about getting their property back in pristine condition," Wilhelm-Morden said.

"The chamber, or whoever the facilitator is, would put the businesses together with the landlords, and there might be some incentive involved in getting people who have empty houses up here to rent them, but yeah, we need to work out those details."

A smaller working group is going to look at how some of the things that were discussed can be implemented, and the task force will meet again in early December.

Wilhelm-Morden said she expects some recommendations to come before council in mid-December, but "it's not a simple issue," she said.

"I think it is resolvable, but it's going to take effort, that's for sure."

The task force will be holding public forums to get input from the community, and "certainly anybody who's got some ideas or some views, they can email me," Wilhelm-Morden said (contact executive assistant Wanda Bradbury at wbradbury@whistler.ca).

Meanwhile, a separate WHA housing project on Cloudburst Drive, similar to the first, is moving ahead after council cleared the path via a zoning amendment.

The amendment concerned moving density from an employee-restricted lot to a market lot, which prompted some discussion at the Nov. 1 council meeting.

Councillors Jen Ford and Sue Maxwell expressed hesitation at the move, but ultimately voted in favour.

"The reason I didn't like it was if we can build another floor on one of the WHA buildings, let's do that, because there's no shortage of need in that," Ford said afterwards, adding that it was explained to her that that wasn't possible in this case.

"I'm not 100-per-cent in love with the idea of creating more market (housing). I would be much, much happier if we could create more resident-restricted."

The next project on Cloudburst will be comparable in size to the one currently under construction — adding about 100 more beds to the inventory, Zucht said.

"We're hoping to start working on that site probably by the end of the year or early in the next year," she said, noting that design work has yet to begin.