Garry Watson honoured for outstanding contribution to the community
Feb 11, 2005 1:43 AM By: Alison Taylor 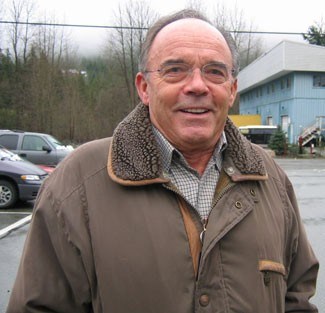 It was the summer of 1961 when a young lawyer from Vancouver came to Whistler for the first time, bedding down in a bunkhouse owned by one of his clients.

He came to go ski mountaineering and, borrowing his client's pickup truck, he drove up the microwave tower road on the backside of Whistler Mountain then hiked the rest of the way up to the peak.

What he saw from the top was more than the beautiful lakes nestled among the trees on the valley floor, more than the acres of pristine powder and untouched wildness. What he saw there, when he scrunched up his eyes and let his imagination run wild, were enormous possibilities. It was a pivotal experience in young Garry Watson’s life.

The following weekend he again took the three-hour train ride up from Vancouver, and so his own future became forever tied to the future of Whistler.

Forty-five years later, the provincial government has recognized Watson with a Community Achievement Award, which honours the spirit, dedication, imagination and contribution of outstanding British Columbians to their community. He is the only recipient from Whistler and one of 38 people across the province to receive the award in 2005.

It's an honour which, while it makes him pleased, also leaves him feeling a little humble.

"It's unsettling in a way to be singled out," he said.

"So many people were involved (in the development of Whistler). What about the rest of the team?"

He draws an analogy from his football days at Dalhousie University in Halifax when the team won the Maritime championships.

"Everybody contributes their own efforts to varying degrees but it takes everybody (to win)," said Watson.

"The list of people who contributed to Whistler's success is enormous so I feel a little self conscious… It's nice."

It certainly took a team to build a resort from the ashes of a town dump.

There was however, a buzz and an excitement brewing in Vancouver as four businessmen began to seriously consider the possibilities of mounting a campaign for Whistler to host the 1968 Winter Olympics.

Watson immediately got involved and became chair of the community planning committee for the Olympic bid. They were reaching for the big pie in the sky, recalled Watson.

Though they lost the bid to Banff the Whistler buzz didn't let up, and a few years later, on Valentine's Day, 1966, Whistler Mountain officially opened for skiers.

Then the permanent population numbered about 25 and Watson was one of the weekend warriors, building the first cabin in Creekside, across from what is now the Rimrock Café.

Almost a decade later, it didn't take much convincing for Watson to run for a seat on the first council. It was a one-year term and he took a sabbatical from his Vancouver law firm.

His work in Whistler was so interesting and rewarding, he ran for office for the following two terms, and won each time.

"This (was) pretty stimulating stuff, as you can imagine," he said, adding that his role was the "practical guy with a legal background."

His five years as an alderman in those first three councils culminated in 1980 when Whistler Village opened. Of all the things that happened in those early days, that is Watson's proudest achievement.

For the next eight years Watson was senior legal counsel at BC Place, a provincial Crown corporation, and then he moved back to Whistler permanently. He has continued to work tirelessly for the resort community ever since.

Watson has served on the boards of the Whistler Health Care Foundation, the Squamish-Lillooet Regional District, the Whistler Valley Housing Society, the Community Foundation of Whistler, the Board of Variance, the School Tax Action Committee and every Olympic bid committee since the 1968 bid. He has also been very active on three strategy committees, which are the backbone of the Comprehensive Sustainability Plan, Whistler's planning document for the next 15 years.

As Whistler moves into another stage of its young life, Watson is curious to see how fringe development, or as he calls it "parasitic" development, impacts the resort, as well as how the athletes village unfolds, which is an enormous project.

Watson and the other recipients from around the province will be recognized in a formal presentation ceremony in Victoria on March 15.