COS says such a program would not 'benefit the bears or the safety of the public
Oct 13, 2015 6:00 PM By: Brandon Barrett 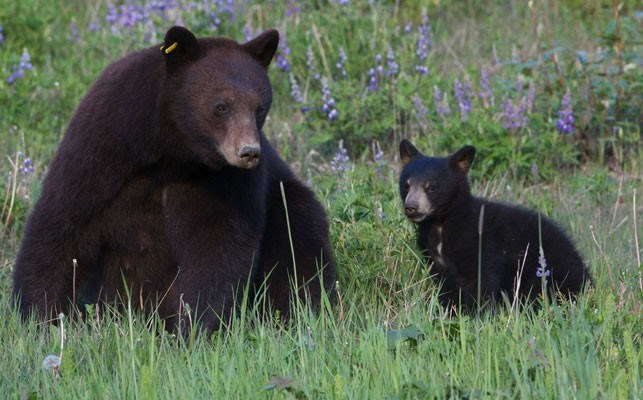 The provincial government has turned down a request from Bear Smart to implement a diversionary food program in Whistler during one of the worst natural food crises for bruins in recent memory.

Bear Smart director Sylvia Dolson reiterated the need for a food drop to be organized as a way to curb potential conflict as bears fatten up without the benefit of a healthy autumn berry crop.

"In my view, the only humane thing to do at this critical time is to help where we can," said Dolson, who has also thrown her support behind an online petition calling for Premier Christy Clark to allow for a feeding program when natural food is limited. "It is our moral obligation as a species that has disrupted (bears') habitat and natural way of life. That help would take the form of a temporary diversionary feeding program."

A Ministry of Environment representative could not be reached by press time to comment.

While technically illegal in B.C., diversionary food programs have already been put in place elsewhere: Parks Canada plants animal carcasses for black and grizzly bears to feed on in the springtime, and, despite opposition from government officials, the Lake Tahoe-based BEAR League organized an illegal food drop in 2007 during a season when natural food sources were scarce due to drought and wildfire.

But Inspector Chris Doyle with the Conservation Officer Service (COS) believes such an initiative would only hurt Whistler's bear population.

"The information we have at this point is that that type of activity does not, in the long term, benefit the bears or the safety of the public," he said.

Because of concerns that diversionary feeding would create nuisance bears and jeopardize public safety, there have been few studies examining its potential impacts.

A rare exception was a 2009 study by the Wildlife Research Institute in Minnesota that examined diversionary feeding at a U.S. Forest Service campground and residential complex over an eight-year span.

Researcher Lynn Rogers found that "nuisance problems were greatly reduced" even with garbage readily available and bears being food-conditioned. "In this study and other examples of diversionary feeding across North America, nuisance complaints, house break-ins, attacks and bear removals were fewer, often drastically fewer, than elsewhere, and residents became more willing to coexist with bears," Rogers wrote. "The study showed that hunger, not habituation or food conditioning, is the primary factor creating bear-human conflict in urbanized areas."

Rogers is not without his detractors, however. Critics have accused him of overly habituating bears to human contact, and a Minnesota judge refused to renew his longstanding research permit last year after concluding that his unorthodox research methods "significantly contributed to bona fide public safety concerns."

Dolson's renewed calls for an emergency feeding program came after the killing of a mother bear and her cub last week that had demonstrated "some escalating behaviour over the summer," said Doyle.

In the days leading up to their destruction, the bears had reportedly entered a building and garbage shed, and accessed unnatural food at a campground, said Doyle.

The sow, known locally as Sunny, was a long-time research subject in Whistler who had been previously relocated with her three cubs after showing aggressive behaviour when she was separated from her cubs along the Valley Trail during Ironman Canada. Dolson said the sow would have been "nutritionally stressed" having to feed three growing yearlings. It's unknown what happened to the other two cubs.

Last Wednesday's killings prompted outrage from Dolson and others in the community who believe the cub should have been taken to a rehabilitation centre.

"COs and RCMP are killing bears for minor infractions at a time when they are starving and they're biologically programmed to put on the pounds," said Dolson.

Doyle explained that due to the cub's escalating behaviour over an extended period, it did not meet the threshold for rehabilitation.

The COS came under fire in July after a conservation officer was suspended by the service for refusing to kill a pair of cubs whose mother was caught eating salmon from a freezer in Port Hardy.

The officer involved, Bryce Casavant, was eventually transferred out of the COS. He has since filed a grievance with the B.C. government workers union. It was another black eye for an agency that already struggles with public perception issues.

"Obviously we want to maintain good relations with the community and we are there to serve the community," Doyle said. "The unfortunate thing is we're not responsible for the conflict behaviour of the bears; there are a lot of other factors that influence that. We're responsible with dealing with the ultimate conflict that's created many times by human laziness, and at other times created by illegal activity, such as feeding bears."

The Whistler Bear Working Group, which includes representatives from Bear Smart, the RMOW and Carney's Waste Systems, was made a select committee of municipal council this month, which should expand the group's scope and influence, explained Mayor Nancy Wilhelm-Morden.

"By making them an advisory group of council, their status will be formalized, there will be better communication, the minutes from their meetings will come to council and they'll be able to make recommendations for various actions to be taken to council," she said.