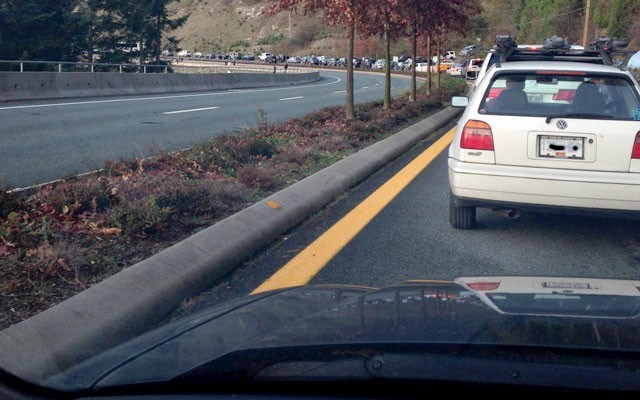 Driven to court Discussion around the decorative barriers on Highway 99 near Lions Bay is picking up again as a Whistler woman is suing the province for negligence. File PHOTO

A Whistler woman involved in a fatal crash on Highway 99 near Lions Bay one year ago is suing multiple parties for negligence.

On Sept. 2, Olivia Rey filed a Notice of Civil Claim against the Ministry of Transportation, the Municipality of the Village of Lions Bay, Miller Capilano Maintenance Corporation and Sea to Sky Investment Limited Partnership.

"The Notice of Civil Claim alleges that the section of the highway in the vicinity of Lions Bay was poorly designed and when it became apparent that many accidents were occurring in that area, no steps were taken by any of the Defendants to remediate the highway," reads a media statement from Rey's lawyer, Nancy Wilhelm-Morden of Race & Company, LLP.

A Freedom of Information search by Rey's lawyers found that since the highway was upgraded in 2010 there have been 111 collisions — resulting in 56 injured and two fatalities — along the stretch where the Nov. 1, 2015 accident occurred on a rainy Sunday afternoon.

Rey was the driver of a Honda Civic travelling north on Highway 99. Approximately 400 metres north of Lions Bay Avenue, her vehicle hit the landscaped median and rolled into the southbound lanes, striking a Nissan Sentra. The 75-year-old driver of the southbound vehicle, a resident of Squamish, was also injured, though not seriously.

Rey is seeking general and pecuniary damages from the defendants, including loss of past wages, cost of transportation to and from medical treatments, past and future medical and rehab expenses and renovation costs to make her home wheelchair-accessible.

"(Rey) submits that the accident and resulting injuries could have easily been prevented by the presence of concrete barriers instead of a landscaped median as her vehicle would have hit against a barrier and come to a stop instead of being flipped and propelled into southbound traffic," states the claim.

"(Rey) further states that the Province failed in all circumstances to take all the necessary steps to ensure that the highway was safe for motorists using the public roadway."

The Municipality of Lions Bay and Ministry of Transportation declined to comment as the case is before the courts. The other defendants did not respond to requests for comment before Pique's deadline. Only Miller Capilano Maintenance Corporation has filed a response to the civil claim, in which it denies all the claims.

In its response it states that Rey, "(failed) to take adequate care for her own safety," and "(operated) a vehicle with inadequate and improper tires..." among 17 other contributing causes.

The stretch of highway in question in the civil suit, from Tunnel Point Rest Area to Eagle Ridge Interchange, has been a point of contention for some time.

In the past, petitions have been circulated to erect concrete barriers in the area.

Tyson Lehmann, a paramedic who works on the North Shore, raised the issue again this past spring.

"It's always carnage," Lehmann said, of his experience in responding to calls in that area.

"It's always vehicle-on-vehicle that's crossed the median where those decorative dividers are."

Lehmann has resurrected a change.org petition started by West Vancouver resident David Tompkins in 2015. It currently has 3,286 signatures.

"These accidents don't need to happen," he said.

"With a median, these cars will just bounce off the barrier and bounce around in their lane. With a decorative divider they're going to cross the lane into oncoming traffic, and that's what's causing people to die."

The province invested $5.4 million in safety upgrades on Highway 99 in 2016, including variable speed signs, a dynamic curve warning sign in Lions Bay that flashes when motorists are taking the corners too fast, overhead digital signs and various surface improvements.

Asked in a separate email if the municipality is lobbying the province for more safety measures, Lions Bay Mayor Karl Buhr said: "We are of course concerned with noise and safety on the highway, especially since our volunteer fire and rescue department handles all calls on the 28 km stretch from West Vancouver to Furry Creek.

"We don't have anything to announce on median barriers at this juncture, but whether it's barriers, or improved signage, or speed limit changes, or advocating for new average-speed-over-distance technology, we continually lobby the Province for improvements, not only at Lions Bay but throughout the Sea to Sky corridor."

In an email, a Ministry of Transportation spokesperson said, "We are aware of the request from local residents to build a centre median barrier along the Lions Bay section of the Sea to Sky. The current planted median area with curbing is designed for the safety of the travelling public at the posted speeds.

"Currently, ministry staff are working closely with the Village of Lions Bay to discuss further options to improve this section of Highway 99 through the Village.

"While the serious collision rates for this segment are generally low, we are aware of the effects of collisions, the delays to travellers of this route and the impact to accessibility for Lions Bay Village residents.

"We will continue to consult with the municipality and other stakeholders on the options to enhance safety and efficiency through this section of highway."

Aside from the enormous human impact, accidents on Highway 99 also come with big economic implications for Whistler.

On Oct. 17, the Resort Municipality of Whistler issued a request for proposals seeking independent consultant services to study highway closures and how they can be reduced.