Creator of the Mushroom House designed an erupting water fountain for Village Square before the recession Twenty-five years ago, when the Whistler Village site was being transformed from town dump into world class ski resort, a local artist was asked
Mar 12, 2004 6:06 AM By: Alison Taylor 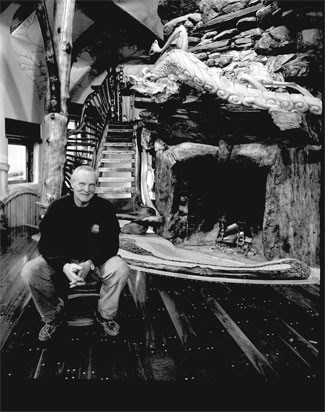 Zube Aylward in his home.

Twenty-five years ago, when the Whistler Village site was being transformed from town dump into world class ski resort, a local artist was asked to capture the mood in a piece of public art.

Zube Aylward, who later went on to create Whistler's infamous Mushroom House in Emerald Estates, was commissioned for the job.

His vision was a design for an eruption from deep in the earth, pushing up a granite crust with lava and water cascading down, making a waterfall/water fountain.

It was called A Mountain Born.

"At that period of time it was just when Whistler was getting going and so I wanted to present something that showed the feeling that was around at the time," recalled Zube.

"I just wanted to show the sort of energy... all the hopes and dreams of Whistler just beginning."

But it was 1980 and the recession was just around the corner.

Soon money was scarce and the appetite to spend $100,000 on a piece of public art dried up.

"They were going to get donations from businesses and then when the recession hit there was no appetite for throwing money around," said Aylward.

His design was all but forgotten, relegated to old files in the municipality's Public Works Yard.

Flash forward to 2004. Plans are now underway at municipal hall to bring a new piece of public art to Village Square.

Municipal staff has chosen a tall structure called The Kiosk as the right piece for the square. It is set to go beside the existing map board located in between the liquor store and Citta's.

"It was the cheapest house in Whistler," said Crawford.

"Everybody considered it a tear down."

The eclectic, whimsical house that Crawford bought in 2000 has since become his dream home.

He wanted to get to know the man who had created this home and had to look no further down the road than to the Mushroom House – Aylward’s 25-year labour of love.

After finishing The Willing Mind, Aylward began his building project that would later become famous in a town full of famous award-winning homes.

Like his first house, the Mushroom House brought together the talents of many artists who were allowed to explore their medium.

"Mine's eclectic (but) his home is refined art," said Crawford.

After seeing the Mushroom House Crawford decided he wanted to make a book filled with photographs and the story of how it all came to be.

It was when he was doing research for this book that he first came across Aylward’s fountain design for Village Square.

Even though many things perished in the Mushroom House during a fire in the early ’90s, the design for A Mountain Born survived because it wasn't in the house at the time of the devastating fire.

When Crawford found the drawing, Aylward explained the basic concept of the design to him.

"It's a moment in time," explained Crawford.

"Right at the moment an eruption has occurred."

The upright parts of the design are basalt columns. The columns are rising up through slabs of granite, which represent the crust of the earth being broken away.

The water, constantly falling from the top, runs over glass mosaic tiles in hues of reds and oranges to give a molten lava effect. This would be lit from underneath.

One section could be wired underneath for a sound stage. Another section has staggered rock podiums for award ceremonies. The outer rings of the design are smoky and dusty coloured and also function as extra seating in the village.

Aylward said the original dimensions of the project were 20 feet wide by 15 feet high. That included the sound stage, which could also be removed from the project.

"We built a mock up first with bales of hay to get the size (in) proportion," said Aylward.

It was designed to be the centrepiece of Whistler, placed in the centre of Village Square.

"Every time I walked through the village I wished it was there," said Crawford.

He decided to share Aylward’s story stretching back 25 years to remind people that A Mountain Born was once designed to tell Whistler's story to the thousands of people who pass through the village every year.

"I can't see why (the municipality) would look anywhere else," said Crawford.

"(Aylward) had been commissioned all those years ago to do the plan."

In the meantime the municipality is moving ahead with the designs for The Kiosk.

The art will be a tall mast covered in translucent fabric, which will be illuminated from a light within, acting as a beacon or a lantern.

It will be a part of the overall Village Square redevelopment project, which begins in April after the World Ski and Snowboard Festival and includes upgrades to planters, patios and landscaping, among other things.

Though Aylward has never sought to remind the municipality that his drawing still exists, he thinks it could be a viable piece of art to remember where Whistler came from and the dreams it held in its hands in 1980.