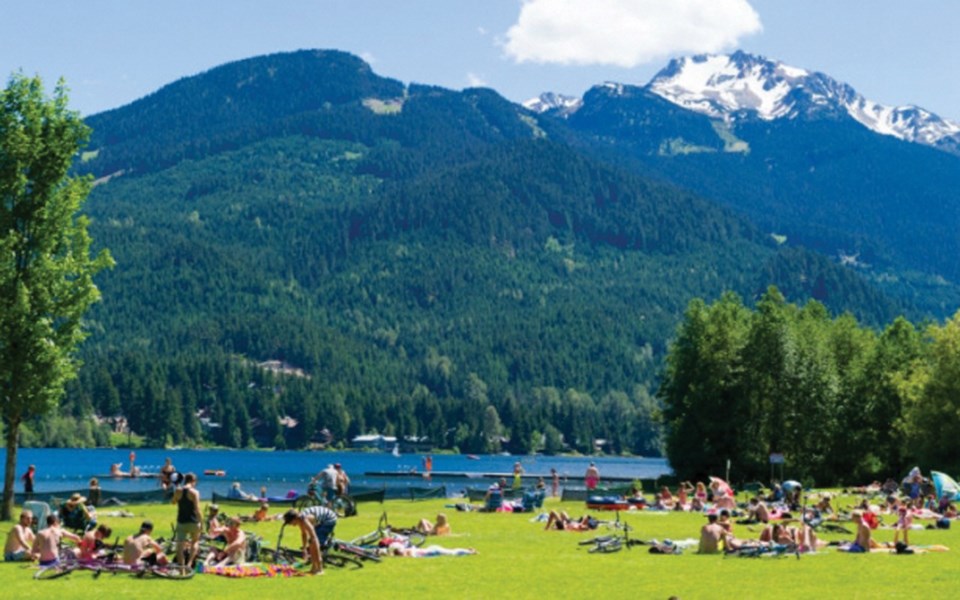 pondering parks Rainbow Park, pictured, is one of eight major Whistler parks that the community proposed ideas for as part of the RMOW's parks master-planning process. File photo by mike crane / courtesy of tourism whistler

Whistlerites got a look at some of the "big ideas" the community has proposed for the future of the resort's parks this week, the latest step in the RMOW's development of a parks master plan.

On Tuesday, June 17, the municipality provided a glimpse into the second phase of its Outside Voice campaign and asked the community to "get imaginative."

"Our parks were originally designed and built in the '80s and '90s, so this is kind of a refresh," explained RMOW parks planner Annie Oja. "Things that might have been a good idea back then, maybe we want to reconsider and maybe there are some new elements that have evolved in park design that we want to add or implement."

The RMOW considered public feedback from a December open house, as well as input from staff and the municipal Recreation Leisure Advisory Committee.

Attendees to the open house, held at the Maury Young Arts Centre, were given the chance to review and provide feedback on diagrams that visually represented a range of ideas proposed for reprogramming eight of Whistler's busiest parks. The RMOW has stressed that the ideas have not been set in stone and are intended to spark conversation.

The common recurring themes, according to RMOW resort operations manager Paul Beswetherick, were related to managing capacity and aging infrastructure. "Those are the two big issues," he noted.

A top priority will be to improve dated drainage and irrigation systems, particularly in Rainbow and Meadow parks.

"Not only that, but they're not as efficient as they could be," Beswetherick added. "We have over-irrigation and under-irrigation, and these are efficiencies we look at to try and make the best use of water that we can."

One of Whistler's busiest parks, Rainbow Park garnered a high number of suggestions from the public, including:

• Building a boardwalk and adding a large dock;

• Improving parking, relocating the off-leash dog beach to the west end of the park and improving the waterfront area;

• Moving two beach volleyball courts to another park, while maintaining one of the courts.

Attendee Paul Fournier agreed that parking needs to be addressed at the park, particularly on summer weekends when cars can typically spill into the surrounding neigbhourhood.

"I really feel that pay parking is a no-brainer, especially for Rainbow," he said. "We have to discourage people from bringing cars there, and most of these people are from out of town, from the city, and they pay for parking everywhere anyways."

With a spray park at the end of its lifespan, failing drainage, and undersized and underutilized baseball diamonds, Meadow Park would appear to be in need of a major makeover.

Among the ideas proposed by Whistlerites, were:

• Expanding the riverfront and picnic area;

• Rerouting the Valley Trail to better access all areas of the park;

With the popularity of Whistler's softball league in the summer months, Spruce Grove's baseball diamonds—and capacity, more generally—were the focal points of the public's feedback.

Some of the ideas presented were:

• Improving the pickup and turnaround area;

With its proximity to the village, capacity issues have also struck Lost Lake Park, which doubles as an important migrating zone for the Western toad in the summertime.

The major ideas presented for the future of the park were:

• Erecting a picnic space in the woods;

• Adding a pier to the lake.

Another park with irrigation issues, there were only a handful of notable suggestions included in the presentation on Alpha Lake Park. They were:

• Rerouting the Valley Trail, which currently bisects the park;

On the smaller end of Whistler's major parks, Wayside Park, while accessible by the Valley Trail, is challenged by a lack of vehicular access, as well as aging concession buildings.

The community has floated the idea of:

• Adding a new boathouse with concession;

• Building a boardwalk trail around the wetlands;

• Connecting trails to a crosswalk in the Rainbow neighbourhood.

Claire Ruddy, director of the Association of Whistler Area Residents for the Environment, said it's essential that Whistler's remaining sensitive ecosystems are protected in any future parks upgrades.

"We have already developed on 70-plus per cent of (Whistler's wetlands), so we need to make sure the pockets that remain are safeguarded and stay really valuable in terms of their habitat use, and were not creating scenarios where people are trampling through toad habitat, or the River of Golden Dreams wetlands, which, let's face it, is already happening," she warned.

Purchased by the RMOW in 2017 for $6.5 million, the historic Parkhurst lands are a blank slate for planners, with a variety of opportunities—and challenges, trail and vehicle access chief among them—identified.

Among the opportunities put forth by the community were:

• Connecting to the Valley Trail;

• Connecting to the Sea to Sky Trail;

Whistlerites can have their say on the future of the community's parks in an online survey at whistler.ca/outsidevoice until June 24.

The RMOW will take the latest feedback and incorporate it into a second round of public engagement, slated for later this summer, before embarking on a design phase in the fall.