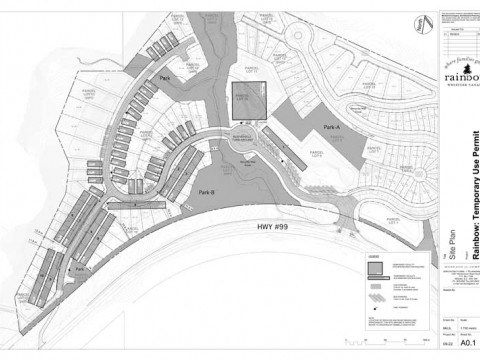 Just four months before the 2010 Games, Whistler council will consider allowing a 1,600-person work camp to set up temporarily at the Rainbow subdivision.

Municipal staff is now processing an application from Target Logistics on behalf of Contemporary Security Canada for a 150,000 square foot camp at the new neighbourhood development.

It is set to go before council for a decision on Oct. 20.

"The site and the proximity to Whistler provided us with a good option that gives a housing solution near the Olympic venues," said Todd Severson, project manager with Contemporary Security Canada.

When asked if four months was enough time to put up 150,000 square feet of living space, Severson said:

"Like many things with the Olympic Games, we always wish that we had more time and it would have been great if we had started this a year ago but we are going to make the most of the time that we have available to us."

The application shows several buildings with not only sleeping quarters but also a large three-storey dining and entertainment area for the security personnel.

The camp is slated for the south side of the Rainbow subdivision, which has yet to see any residential building.

The land, which will eventually see employee and market housing on it, is already fully-serviced with sewer, water and hydro hook ups.

The work camp application comes after months of speculation about the location of 1,600 private security personnel needed for the Sea to Sky corridor during the Games.

The Pemberton Industrial Park was an option at one time.

That's why the application at the Rainbow lands came as a disappointment to Pemberton Mayor Jordan Sturdy whose council had cleared the way and given the green light for a temporary work camp at the Pemberton Industrial Park.

"It's a tremendous loss if it is in fact approved in Whistler," said Sturdy.

A 1,600-person security camp in Pemberton would have been a boon to the village. Without it, Sturdy says they are left out in the cold to some degree.

"There's a sense that we're on the periphery here, that we're not really involved (in the Games)," said the mayor.

The decision to put the camp in Whistler could also jeopardize plans that are in the works to expand Pemberton's Live Sites program. Sturdy said there were ongoing discussions to expand the Live Sites in Pemberton with a showcase of local art, music and food. But that expanded program needs numbers to make it work.

"We may not have the critical mass necessary to justify it," said the mayor.

Just last month Paul Selina, president of Pemberton's Spirit of B.C. Committee, lobbied Whistler council for its support of a Pemberton base camp.

But Severson said there were a variety of factors that led to the decision to put the camp at Rainbow.

"It's a very big investment so we have to be sure of the solution that we're getting," he said.

He would not say how much the camp costs. It is part of the $100 million contract, awarded by the RCMP-led Olympic security unit to Contemporary Security Canada, for private security work during the Games. That includes the 5,000 personnel needed from Vancouver to Whistler.

The 1,600-person application is for maximum capacity and it remains to be seen if the site and the proposal can accommodate that number of security personnel.

If approved, however, it should take care of Contemporary's needs in the Sea to Sky corridor.

"Predominantly it should," confirmed Severson.

It is not clear when construction will begin on the site and when security guards will first move in.

Severson said their start dates are subject to the RCMP official venue lock down dates.

"We build our schedule around their needs," he said.

Though he is confident that Rainbow will be a great site for the camp, Severson has a back up plan should council not give its approval for the Temporary Commercial Use Permit (TCUP) for the site.

"With the Olympics there is always a contingency that we have in the back of our mind if things don't work out one way or the other," said Severson. "We're trying to do as many things in parallel so we can have a fallback if there's any reason that something doesn't go ahead."

Target Logistics is the chosen supplier for the camp at the Rainbow lands. The company has provided housing solutions for several high profile events such as the 2002 Salt Lake City Games. Its role in that event increased dramatically in the wake of the Sept. 11, 2001 terrorist attacks.

Its solution was to lease more than 1,000 brand new apartments for U.S. Secret Service and others, providing more than 2,000 bedrooms.

The company leased a 184-acre county fairground and installed roads, electricity, running water, stores, restaurants, nightclubs, and then returned it to its former state when the 100th anniversary celebration was over.