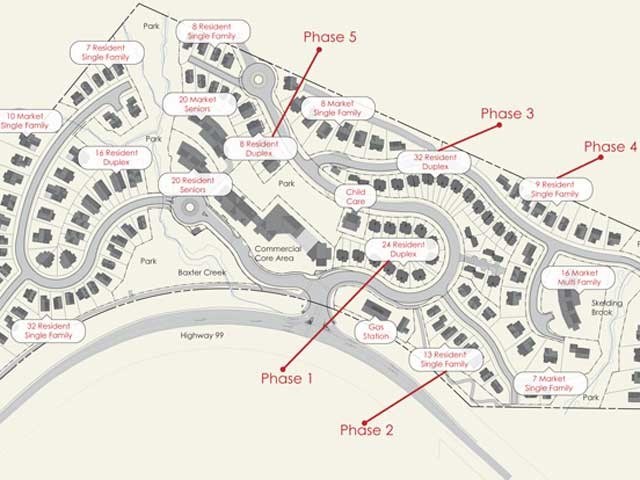 Ready to Build The latest site plan for the Rainbow Development, with Phase I getting underway this year

A sigh of relief could almost be heard from those who attended Thursday’s emergency council meeting, where the vote was 5-2 to pass a revised housing agreement for the Rainbow Development.

“This is a major milestone for council,” commented Councillor Gord McKeever after the meeting, as people slowly filed out of MY Millennium Place into the rainy June evening.

He said it took a lot of contemplation for council to come to this conclusion, and he was glad to see the project move forward.

Ann Chiasson, one of the partners in the Rainbow Joint Venture, added on Monday that council’s decision was an “acceptable compromise” and construction on site is moving forward.

“It was never a big deal,” said Chiasson, about the controversial clause that came to council’s attention last week.

“It got made into a big deal because everyone was panicking, but the reality is we are fine with it.”

Despite the positive result, discussions were tense throughout the evening.

Many councillors said they were reluctant to pass the resolution after another emergency council meeting was held two years ago to pass another so-called imperative piece of legislation for the project.

“Forgive me if I am skeptical, but history has taught something here,” said Councillor Bob Lorriman.

“We had a special meeting two years ago when we passed fourth reading (on bylaws to move the project forward), which we were told was dire and we had to pass so the developer could build the housing units. And we did. And the developer did not deliver those housing units for whatever reason.”

Mayor Ken Melamed ended the meeting with a frank warning to the developers.

“This project does not get a free ride from here on out,” he said.

The mayor also spoke to characterizations, finger pointing, blame, betrayal and claims of lack of leadership that have passed between stakeholders this week after the future of the project became uncertain.

“No one could have pictured the twists and turns and deviations on what has been an incredibly bumpy road,” he said.

Most councillors at Thursday’s meeting acknowledge that a resolution needed to be passed because it was the “11 th hour” and any hold ups could further jeopardize the project. Only two councillors voted against the revised agreement: Ralph Forsyth and Nancy Wilhelm-Morden.

At issue was the “secondary purchaser clause” which became part of discussions between staff and the developers almost 11 months ago, but was only presented to council this month. The clause allows Whistler residents not on the Whistler Housing Authority (WHA) waitlist to buy a home in Rainbow if no one on the waitlist wants to buy it.

The fear among councillors is that a large portion of the homes might not go to people who need affordable housing in Whistler, since almost half of the 150 homes will be priced above $500,000.

Only 76 people on the Rainbow waitlist are qualified to buy one of the 70 single-family homes in the development, currently priced between $525,000 and $625,000.

To address this issue, the revised agreement hammered out in the three days leading up to Thursday evening’s meeting states that only 30 of the 70 single-family homes at Rainbow will go to people not on the WHA waitlist. And all of the 80 duplexes will go to waitlist buyers.

The Rainbow developers also have to try to sell the units to people on the waitlist for 90 days before they can offer them to secondary qualified buyers, reads the revised agreement. During that three-month period, the Resort Municipality of Whistler has the option to purchase the land from the developer.

Marla Zucht, general manager of the WHA, said the housing authority was pleased council passed third reading so the project could move along.

“That was the outcome we were hoping for, because we did not want to see anything slow down with the momentum that Rainbow had,” she said.

Zucht added she is not too concerned with the secondary qualified purchaser clause.

“I think there are a lot of really strong mechanisms in place to almost assure we don’t get there, and I know that in talking and working with the developer, their intention is to make sure all those Rainbow units sell to families on the waitlist,” said Zucht.

“That secondary qualified purchaser clause is really only there as protection or fall back for them to mitigate the risk for Rainbow… There are quite a few safeguards in place to prevent that clause from ever coming to fruition, and that gives me comfort.”

During the meeting, Bob MacPherson, general manager of community life for the RMOW, took full responsibility for the fact council was not aware of the secondary purchaser clause until two weeks ago.

“You do not need to start a witch hunt and look for who to blame, and it is my responsibility to present things to council in a timely fashion,” said MacPherson.

He also rehashed the history of Rainbow, going back as far as 2005 when the memorandum of understanding was established.

At that time the agreement stated that if the properties on Rainbow could not be sold, the RMOW would buy them back at a price of $110,000 for a single family home and $65,000 for a duplex, said MacPherson.

That agreement was dropped in 2006 when “Rainbow was taking longer than we all expected,” he said, and the RMOW became apprehensive about buying back units on a project behind schedule.

“Rainbow was amenable to that being removed,” said MacPherson. “And as part of that discussion, Rainbow said, ‘Our concern has always been if the waitlist is exhausted, we need to know there is a purchaser out there of these lots because Rainbow is certainly counting on that.’”

Rainbow then introduced the secondary qualified buyer clause. Municipal staff negotiated with the developers for several months to make sure the clause would only allow Whistler residents to buy property and not allow the homes to go onto the open market. The controversial secondary buyer clause, which came to council on June 16, was finalized at the end of May.

Chiasson said there are a couple more pieces of legislation that the municipality has to approve before the Rainbow development can be finalized, such as the subdivision approval.

“Now we are just moving forward, and we are on schedule to start construction Aug. 1 st , which is exciting,” said Chiasson.

She added that 70 interested buyers toured the Rainbow site on Sunday and “loved it.”

“They realize it is a gorgeous site. Right now, it looks like the moon, but the views are spectacular and I think now they (interested buyers) are going to start seeing themselves there,” she said.