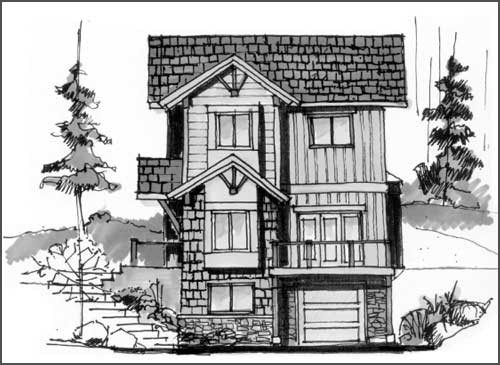 Dozens of Whistlerites have signed a list to buy homes at the new Rainbow subdivision, just one week after the Whistler Housing Authority created a waitlist for the still-to-be-approved project.

And the WHA is still counting.

Though the project does not yet have final approvals from the municipality, the WHA created a waitlist for Rainbow separate from its master list in part to test the interest in the project.

“It’s a way to start to gauge what the interest is out there in the community for this location…” said Zucht. “It will just help with our ongoing planning.”

WHA Board Chair Gord McKeever stressed this week that the waitlist is an expression of interest and non-binding. The financial package for Rainbow has not yet been determined. The WHA board has considered a possible financing package but has asked the developer to provide more information on the deal.

Rainbow’s revamped website details preliminary financing packages based on a cost of $200 per square foot for the homes. There is the $110,000 lot price on top of that as well as the $13,000 in works and services charges.

“We’re not going to endorse what we feel is an undue risk on the purchaser,” said McKeever. “That’s not in the community’s best interests at all. But that having been said, it has to be feasible for the developer as well.”

Though the project sits at third reading, developer Rod Nadeau is confident they will meet all the necessary requirements to get final approval in the spring for the large housing project. The first phase will include 25 single-family homes and 20 duplexes.

His confidence is evidenced by the sheer volume of work underway on the site between Alpine Meadows and Emerald Estates.

At the end of January, with the sun beating down on the Rainbow lands, the site is slowly starting to take the shape of a subdivision, despite the blanket of snow. The rough outline of large portions of the subdivision roads is visible, along with several excavated lots.

In order to have the first phase of the project complete with people living in their homes by the end of 2007, Rainbow developers intend to have building on the lots taking place in concert with the site servicing. While unusual, it’s a necessary step to meet their time targets.

“Essentially we’re coordinating the servicing and the housing simultaneously and there’s benefits and disadvantages to that,” said Nadeau. “And the benefits in our case far outweigh any disadvantages.”

The major disadvantage is the logistics of working on homes, water and sewer all at the same time. There is the potential for increased costs and a concern that the homes could be finished before sewer and water lines are completed.

“There is the small potential that a house could get started and the servicing wouldn’t get finished,” said Bob MacPherson, general manager of community life. “…what we’re trying to do at our end is make sure there’s contingency in place that if there is a bit of a doomsday, if I can call it that, that there are ways that we can make sure that the homes get serviced.”

The municipality has not yet seen the site servicing drawings. Those will be complete by the end of February, according to Rainbow’s timeline.

MacPherson said Rainbow is working on fulfilling all 22 obligations to get final approval.

“We haven’t signed off on everything but I think that all the pieces are in place to get that satisfied,” he said.

As work continues on engineering plans and machines dig on the site, the finer details of the project are also coming together.

Four local architects — Brent Murdoch, Brigitte Loranger, Dennis Maguire and Christian Paroyan — have each submitted one home design, which are now posted on the Rainbow website complete with floor plans. Nadeau estimates purchasers will be able to choose from a dozen homes and eight duplexes designs.

Some designs will use modular housing and others will be built by Glacier Creek, the same company that built the Beaver Flats employee housing project in Creekside and the Peaks in Pemberton.

A modular display home of 1,600 square feet from Britco will be on site in April.

The Rainbow project is to deliver 150 units of employee housing, phased over three years beginning in 2007. The WHA’s master waitlist now sits at more than 570 applicants.

The WHA is asking that all feedback and questions on the proposed project be directed to the Rainbow developers. For more information go to www.rainbowatwhistler.ca.