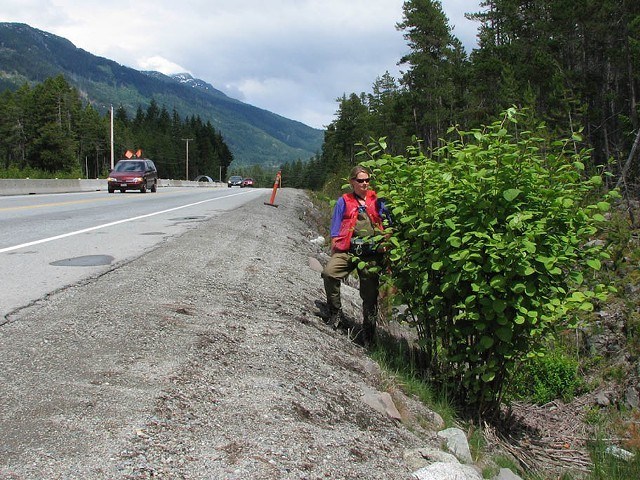 NOT KNOTWEED Japanese knotweed, an identified invasive plant species, is seen on the side of Highway 99. Monday, June 9 marks the first day of Invasive Species Week, aimed at raising awareness of invasive plants in B.C. File Photo

The B.C. government has officially declared Monday, June 9, through Sunday, June 15, as Invasive Species Week to help raise awareness of the dangers of introducing or spreading invasive species in the province.

"There are hundreds of invasive and non-native species in B.C. - from daffodils to giant hogweed - but only some invasive species are of high concern due to their impact on the environment and the economy," said Gail Wallin, executive director of the Invasive Species Council of BC, in a release.

"Invasive Species Week is a chance to celebrate the successes made to prevent and stop the spread of invasive species, and to highlight the need to be vigilant and educated about invasive species, how to spot them, how to prevent them, and how to stop their spread before they become a danger to our province."

To mark the week in Whistler there will be the Burdock Blitz Community Weed Pull on Wednesday, June 11 at 5:30 p.m., which will see volunteers remove burdock along the Valley Trail network in Alpine Meadows and Meadow Park, starting at 5:30 p.m.

On Saturday, June 14 Wayside Park will play host to the Yellow Flag Iris Eradication Patrol from 9 to 11 a.m. Yellow Flag Iris is an invasive species that typically takes over wetlands and displaces native vegetation.

Both events are hosts by The Sea to Sky Invasive Species Council.

Recently, municipal council considered an Environmental Protection Bylaw that included a commitment to manage invasive plant species in the resort. These measures would include a regional approach to invasive species management, working in partnership with the corridor's invasive species council, by continuing public education and assisting land owners with invasive plants on their property.

The bylaw also puts legislation in place for the first time that gives the municipality the authority to issue $250 fines to property owners who have not complied with requests to remove identified invasive species.

Visit www.ssisc.info/blog for a full list of identified invasive plant species in the region, and advice on how to manage them.