Rate of hospitalization for ski-related injuries up provincewide 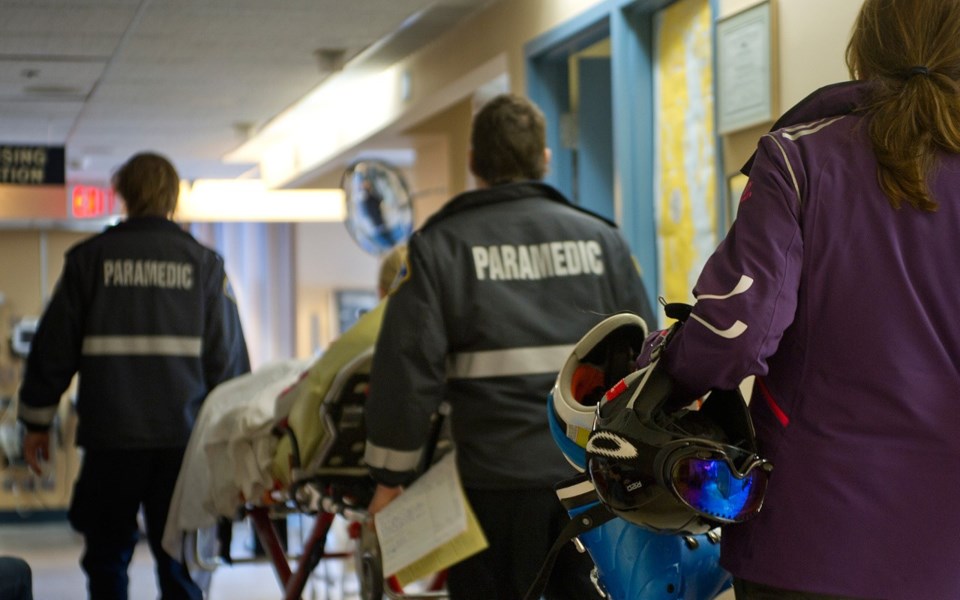 Despite the widespread adoption of helmets, experts with Trauma Services BC said that analysis of skiing and boarding injuries point to a concerning trend. The stats do not, however, take into account the greater numbers of skiers and boarders visiting B.C. resorts.

"[The data is] really just telling us that people are maybe taking a little bit [more] of an extra risk than they should be, and are sustaining more-severe injuries than what we would expect," said Micheline Wiebe, provincial director of Trauma Services BC.

A program of the Provincial Health Services Authority (PHSA), Trauma Services BC maintains a provincial trauma registry and a burn registry, which contain clinical and demographic information on all trauma patients in B.C.

The statistics represent "major injury admissions" from 11 lead trauma hospitals across B.C., including Lions Gate Hospital and Vancouver General Hospital, where serious injuries that occur on Whistler and Blackcomb mountains and require hospitalization are typically sent.

"When we're talking about major injuries that required hospitalizations, the most common ones are extremity fractures ... internal organ injuries, and spinal cord injuries," said Wiebe.

According to a release from the PHSA, statistics gathered over five years show the rate of hospitalizations for ski and snowboard injuries in B.C. is increasing (though there was an "encouraging" 12-per-cent drop last winter).

In the 2014-15 winter season, 418 people were hospitalized in B.C. with injuries caused by skiing or snowboarding, stated the release.

Over the next three winters, the number of injuries steadily increased, peaking in 2017-18 with 573 people requiring hospitalization. (In 2018-19 that number dropped to 503.)

According to the BC Coroners office, each year in B.C., there are about 10 deaths from skiing and snowboarding.

Males are hospitalized twice as often as females with ski- and snowboard-related injuries. For females, the highest number of hospitalizations occur between the ages of 55 to 59, while for males, the age range is 20 to 24.

The PHSA statistics do not, however, factor in the changing number of skiers who are frequenting B.C. resorts.

Nicolson added that safety is the "leading priority" of CWSAA operators, with resorts placing "significant emphasis on safety communication and education programs through ski school and school groups, engaging athletes to promote safe skiing and riding, on-mountain signage such as the Alpine Responsibility Code, and online tools such as safety videos."

Locally, Whistler Health Care Centre emergency room physician Clark Lewis said that he has not observed year-to-year increases in major injuries and that overall rates are down this season from the previous one.

That said, Lewis added that this year's early season saw a high number of injuries relative to the number of overall skiers he observed on the mountain.

"The ratio of skiers to injuries was extremely high at the start of the season," said Lewis. "We saw more collisions than normal because nothing was open.

"On a powder day, we see lots of ACL tears. When it's sunny and firm, we see more high-acuity stuff because people ski fast."

However, Marc Riddell, communications director for Whistler Blackcomb (WB), said that the mountain has not seen an uptick in incidents this season—it has remained unchanged from previous years.

"From a WB perspective, I can tell you our guest-incident rate has been consistent the past five years and is, in fact, tracking down this year," he said.

The operator does not, however, track outcomes once a person is taken off the mountain, so Pique was unable to obtain year-to-year figures for hospitalizations of WB riders.

Riddell added that "safety is top of mind in everything we do and is one of our strategic priorities as well."

From the information shared with guests upon booking, to arrivals, to grooming and the daily decision on what terrain to open, "safety is baked into everything we do," said Riddell.

When it comes to safety there are, of course, things people can do to improve their chances of getting home safe and sound.

Wiebe advised riders and skiers to wear helmets, stay in bounds, and pay attention to their surroundings.

"Really look at yielding to the right of way and understanding the rules of the hill," he said.

The PHSA also recommends carrying a whistle, adding the mountain's emergency number for ski patrol to your cell phone contact list (WB's is 604-935-5555), and making sure that your equipment is in good condition.

The Alpine Responsibility Code can be viewed here: cwsaa.org/policy/alpine-responsibility-code.