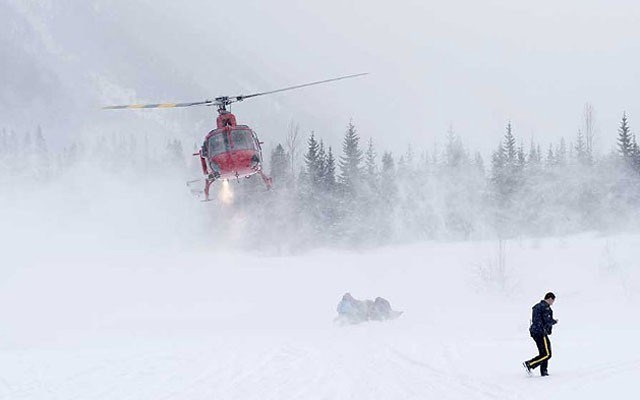 A 42-year-old Squamish man is dead and Pemberton RCMP are investigating after a backcountry incident near Pemberton on Thursday.

The RCMP received a call at about 3 p.m. notifying them of an emergency beacon activation near Pebble Creek on Thursday, said Sgt. Rob Knapton.

"The report we got was that there was an avalanche with one person caught in it and in critical condition," Knapton said.

"Unfortunately ... because of weather and daylight, actually, we weren't able to respond yesterday, and we are working on making our way there today in conjunction with Pemberton Search and Rescue."

The group of experienced skiers with the man were able to locate him using an avalanche transceiver and dig him out, but he did not survive. RCMP was contacted using an emergency beacon. They transported him to a cabin in the area where they waited for rescue crews to arrive, Knapton said.

"It's an unfortunate story ... It's a group who went out that's experienced in the backcountry, they had all the equipment that they're supposed to have, they had emergency beacons to be able to reach us or call for help if something happened," Knapton said.

"Unfortunately, even with that, this person died in this avalanche."

Check back with Pique for more as this story develops.

With more than one metre of snow in the past two days, avalanche risk in the backcountry is high.

Heavy snowfall, rising freezing levels and extreme winds are setting up "a widespread storm slab problem" for the Sea to Sky region (including areas easily accessed from within ski-area boundaries), according to Avalanche Canada's three-day forecast.

The forecast explains that both controlled explosions and skier traffic are causing slab avalanches that could bury or kill those in the backcountry.

The advisory—which was posted yesterday at around 6 p.m.—rates the avalanche danger for the alpine and treeline as high, and the area below the treeline as considerable.

"Around 40-80 cm of new snow since Wednesday adds to 30-50 cm of snow from the past week," reads the advisory. "This new load potentially sits on a weak layer of feathery surface hoar at treeline elevations and on a crust below 1800 m."

"There have not been reports of avalanches on this layer for over a week. That being said, this layer may still exist in isolated areas around treeline in some parts of the region. The additional weight of the new snow could stress deeper weak layers, too."

The heavy snowfall has also led to significant challenges for Whistler Blackcomb when it comes to opening up terrain and managing risk.

Yesterday, the opening of both mountains was delayed and much of upper Blackcomb—including the Crystal and Jersey Cream chairs as well as the alpine—remained closed throughout the day due to avalanche hazard.

Whistler Blackcomb also reported that it is coming off a record-breaking December for snowfall with 384 cm. The previous best was in 1994 with 380 cm.

Yesterday's storm also led to chaos on the roads, with posters on the Sea to Sky Road Conditions Facebook page reporting snowplows and buses off the road and traffic at a standstill at Suicide Hill between Pemberton and Whistler. That stretch of highway was also closed for a spell, but is now open.