No injuries, but several cabins damaged as general manager searches for answers
Aug 10, 2019 7:00 AM By: Keili Bartlett / Squamish Chief 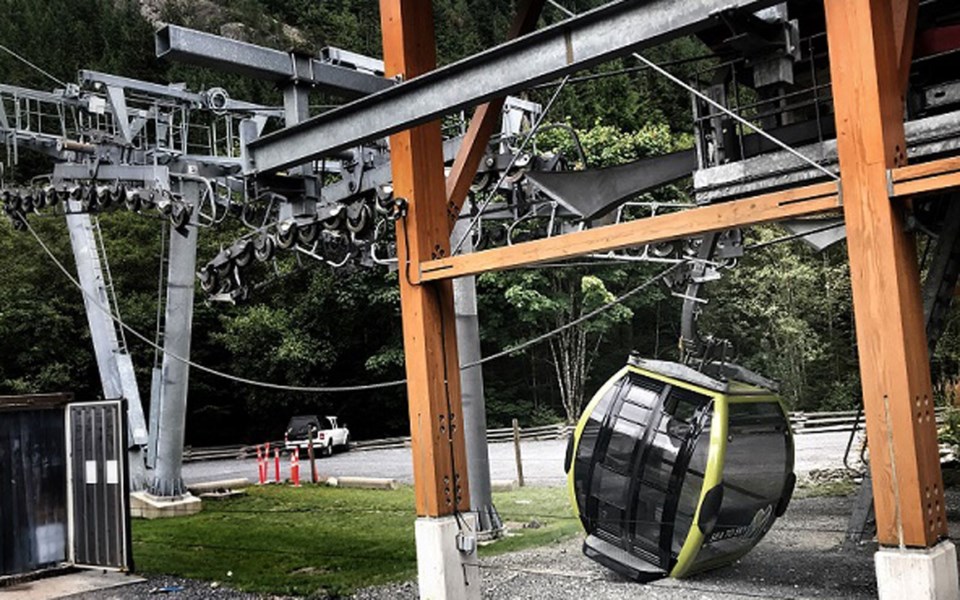 The Sea to Sky Gondola is closed until further notice after its cable and cabins dropped early in the morning on Aug. 10.

The gondola's general manager Kirby Brown said that between 4 and 5 a.m. Saturday morning, the overnight security workers heard a loud noise, then found the gondola was de-roped—the cable and several cabins were down on the ground, with several cabins at the top still suspended between the top four or five towers. Brown said they expect the cabins are heavily damaged.

"We're just in the early moments of investigating how that could possibly happen. Certainly, early indications are that there was no environmental or maintenance mechanism that could have caused it. It points toward a conclusion that somebody interfered with the lift. But first and foremost, of greatest importance, there appears to be nobody that was on the lift."

He said there was no indication of an injury from Search and Rescue, and the RCMP have been notified of the incident.

"All our efforts are focused on understanding how this happened and mobilizing our team to make sure that we investigate properly with all the appropriate authorities," Brown said.

RCMP later confirmed they are investigating. "Our investigation is in the preliminary stages and the cause is undetermined," said Cst. Ashley MacKay with Squamish RCMP, in a release. "Right now we are looking at all possibilities which includes those criminal in nature."

The RCMP is working alongside the Sea to Sky Gondola as well as Work Safe BC and Technical Safety BC, the release stated.

RCMP are asking people to stay away from the area, including the trails that access the gondola. Anyone with information about the incident is asked to call the Squamish RCMP at 604-892-6100 or Crimestoppers at 1-800-222-TIPS, or go to www.solvecrime.ca.

Dopplemayr, a company that specializes in cables, ropes and lifts, is on the way to do repairs.

The Sea to Summit Trail and Shannon Falls Connector Trail are also closed for the foreseeable future.

Meanwhile, in the light of the incident, Whistler Blackcomb confirmed all of its lifts are in working order.

"In response to this morning’s incident at the unaffiliated Sea to Sky Gondola, in Squamish, Whistler Blackcomb can confirm all of its gondolas and lifts have been checked and are in working order," officials said in an email. "A pre-operational inspection is always conducted before the lines open each morning, and this procedure was conducted today, per normal practice. Guest safety is a top priority for Whistler Blackcomb and it will continue to be vigilant in upholding its standards and practices."

UBC professor of geotechnical engineering Erik Eberhardt said it's still early to know what happened. While Eberhardt has not been to the gondola site and is not involved in the investigation, he provided some insight into what factors may be examined during an investigation.

"When it's this early, there's a long list of speculation in terms of what might be a contributing factor or cause. It could be even a combination of causes. Often when something like this fails, it's not sometimes just due to one thing but a combination of things," Eberhardt said. "That's why it's rare."

He added that first, the investigators will likely start on the ground to look for anything related to tampering versus a natural cause or the engineered components failing. He said they will examine if an environmental event, such as a rockslide or rockfall, could have impacted the system.

As a geotechnical engineer, Eberhardt said he would look at the foundations of the pylons (also known as towers) to see if they shifted on the steep terrain. If so, investigators would examine whether a shift stretched or put stress on the cable.

Structures like ski lifts and gondolas, Eberhardt said, are designed for safety redundancy.

"They're meant to be there for all conditions and you start thinking about winter-type conditions, anything from snowload to windload, effects of temperature, cold temperature, hot temperature on the cables in terms of how they respond," he said. “Again, there's a long, long list of factors that they'd be going through. Some of them they can very quickly dismiss, and others they might narrow it down to two or three potential factors that they would then have to do a more thorough investigation."

Eberhardt said the event is unusual, adding, "I think it's important that [people] wait until the experts who are on the site, who are going to be doing the investigation, let them have a chance to at least do an initial walkover so that they start narrowing down what are some of the potential mechanisms. Once they get that opportunity, there can be more details that can start narrowing in at least—maybe not saying conclusively what was the cause right off the bat, but start narrowing down into that. Eventually, they will find out what was the cause."

There is currently no estimated timeframe for repairs or when the gondola will reopen.

- With files from Alyssa Noel

This story originally appeared in The Squamish Chief. To see that version click here.