Police Briefs: Motorcyclist involved in hit-and-run at Marketplace
Jun 3, 2020 7:05 AM By: Brandon Barrett 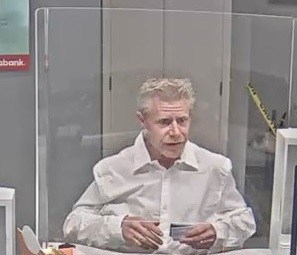 Security footage of a suspect linked to fraud attempts at banks in Whistler and Pemberton. Photo courtesy of Whistler RCMP

Pemberton RCMP is asking the public for help identifying an unknown man who fraudulently attempted to take money out of an individual’s account at two separate banks.

Police said the first incident took place at a Pemberton bank on Saturday, May 16 before a second attempt to get money at a bank in Whistler later that day.

The suspect is described as Caucausian, between 40 and 50 years old, with white and grey hair and a slim build. He was wearing a white button-down shirt, black dress pants, black dress shoes and blue-tinted sunglasses.

Whistler RCMP is on the lookout for a motorcyclist allegedly involved in a hit-and-run in the Marketplace parking lot, police said in a release.

At approximately 6:30 p.m. on Wednesday, May 27, police received a report of a motorcyclist hitting a parked car, before leaving the scene after being confronted by the public. Mounties also spoke to a witness, who said they saw a white 2009 Suzuki motorcycle with a driver and passenger “rev its engine and race through the parking lot” before the bike collided with a parked van. The passenger was thrown off the bike and the van was “substantially damaged,” police said.

The motorcyclist then picked up the bike while he and the passenger tried to leave the scene before being approached by witnesses who urged them to leave a note on the van. The driver then left a note on the van’s windshield and left the scene—but the note turned out to be illegible, police said.

A vehicle was stopped by police twice in a matter of hours last weekend, leading to two drivers prohibitions, according to an RCMP release.

At approximately 7:10 p.m. on Saturday, May 30, Whistler RCMP responded to a report of a vehicle “doing doughnuts” in a cul-de-sac in the 4200 block of Blackcomb Way.

After getting a description of the vehicle, a black 2011 BMW 550i, police tracked down the car a short time later on Blackcomb Way. The driver, a 21-year-old Surrey man, was a Class 7 driver, with restrictions including zero tolerance for driving with alcohol in his system. Mounties determined he was operating the vehicle after consuming alcohol, and he was prohibited from driving for 12 hours.

Three hours later, RCMP noted the same vehicle travelling in the area of Highway 99 and Lorimer Road. After stopping the vehicle a second time, officers discovered the driver, another 21-year-old Surrey male, was driving while impaired with an expired licence.

The man’s licence was suspended for 90 days and his vehicle impounded for a month.