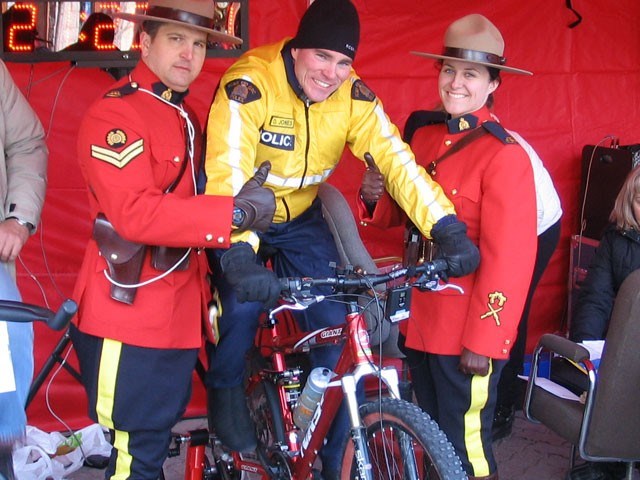 Career in Limbo Devon Jones (centre) was well known in the community for fundraising. In April 2006 he rode a stationary bike for 24 hours, stopping the clock for breaks, to raise $7,500 for Camp Goodtimes.

Whistler RCMP officer Devon Jones has been found guilty of assault causing bodily harm after an altercation with a fellow officer during the 2006 Mountie Stomp Dance.

The decision was released on Wednesday Feb. 13 by provincial court judge Allan Betton, almost three weeks following the trial in Kamloops where the incident occurred.

“(Jones) is to appear in court on Feb. 29 in Kamloops to receive sentencing,” said Inspector Norm McPhail, head of the Sea to Sky Regional Police Services.

“He remains on regular duty until we get a disposition on the case.”

The trial took place from Jan. 21-24 and investigated whether Jones’s actions during the dance were justified.

Jones maintained that Argue had a “tiger claw” throat grip on Constable Paul Sellars, which prompted his intervention.

All three officers were off-duty at the time of the incident.

Testimony at the trial described the scene then degenerating into an alcohol-fuelled brawl, with all participants being RCMP officers.

The RCMP will also undergo an internal code of conduct investigation against Jones. Such an investigation can lead to formal sanctions placed on the officer in question.

Said McPhail: “We are just awaiting the disposition of the case by the presiding judge, and then we’ll make decisions as to Devon’s duty status, transfer, that type of thing, after that point in time.”

Jones is a five-year veteran of the force and was the Whistler/Pemberton RCMP detachment’s community policing officer from 2004 to 2007, as well as the detachments media liaison.

During his time in Whistler, Jones has developed a reputation for community involvement, including cycling with the Cops for Cancer tour and riding a stationary bike for 24 hours to raise money for Camp Good Times.

“In terms of his character on duty and dealing with Devon as a police officer, he is an excellent, very professional person, very much a supporter of the youth in town,” said McPhail.