A passenger of a vehicle was pronounced dead at the scene on July 14, after he was pinned by the vehicle following a rollover. The RCMP received the call just after 8:15 p.m.
Jul 18, 2012 9:00 PM By: Andrew Mitchell 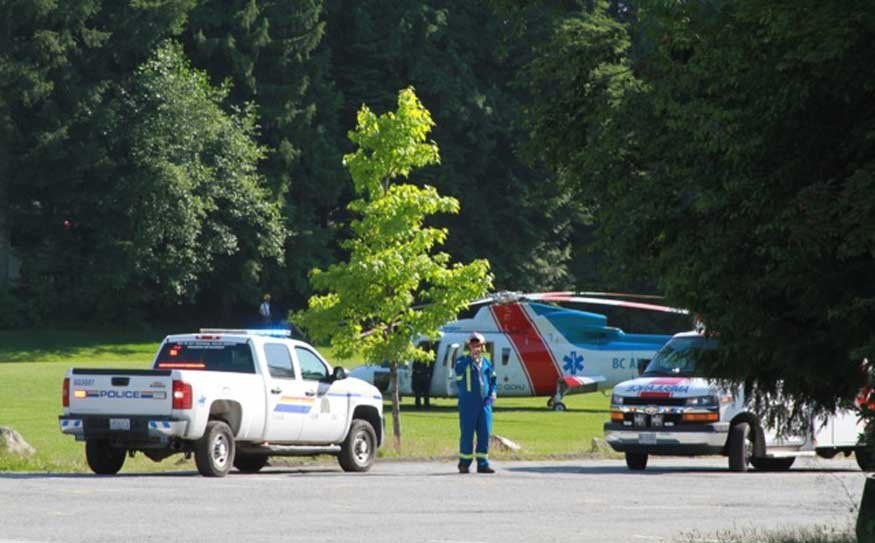 HELI-VAC An air ambulance was used to transport a 72-year-old Squamish resident to Vancouver after a near drowning in a backyard pool on July 12. Photo by Susan Hollis

A passenger of a vehicle was pronounced dead at the scene on July 14, after he was pinned by the vehicle following a rollover.

The RCMP received the call just after 8:15 p.m. and attended the Madeley Lake Forest Service Road near Whistler Olympic Park. The driver of the vehicle was uninjured, and was reportedly driving behind another vehicle when they lost control, struck a rock and rolled over. Both the driver and passenger were wearing lap seatbelts at the time of the crash.

The police attended along with BC Ambulance Service and Whistler Fire Services, and the man's friends also performed first aid. However, they could not revive the victim, a 31-year-old male from Vancouver.

Police are still investigating and there are currently no charges pending. Alcohol was not a factor.

However, police are reminding the public that a 50km/h speed limit is in effect for all provincial Forest Service Roads unless otherwise posted.

police crack down on river of golden dreams drinking

After receiving numerous complaints from tour operators regarding drinking and littering along the River of Golden Dreams, which links Alta Lake to Green Lake, the RCMP ramped up enforcement last week.

Over four days, the RCMP confiscated and poured out up to 350 cans and bottles of beer and spirits, handing out tickets to some of the guilty parties.

"It's a public area, it's a family place for people to go, it's ecotourism, and (offenders) should be mindful of the other people that are in there," said Sergeant Rob Knapton of the Whistler RCMP. "(Drinking and littering) is the last thing that people want to see coming down the river."

As well as the impact on tourism and the environment, the RCMP are concerned by the safety issue. Last year a paddler had to be rescued by another boat after capsizing with brush on both sides and no way to get out of the water.

The RCMP answered several calls related to break-and-enters and the theft of mountain bikes this week.

The most serious case involved a break-in to a residence on the 3300 block of Peak Drive. The house was entered between July 4 and July 9, and a carved native mask by First Nations artist Robert Davidson was taken from the wall.

Another home on the 4800 block of Spearhead Drive was reported broken into on July 14, taking place sometime during the day. Cash was taken from the residence.

A July 15 break-and-enter was also reported by a store in the village. A large quantity of cell phones were taken.

A 2011 DRZ 400 Suzuki motorcycle was stolen from Daylot 5 just before midnight on July 12. The bike was taken during the afternoon.

As well, at least seven mountain bikes were reported stolen this week.

Two local youths, age 17 and 18, are facing charges of mischief under $5,000 after a resident in the Nordic Estates area saw three youths breaking the windows at the bus shelter and called police. The youths were arrested and held until sober, and released on a promise to appear in court as well as to follow certain conditions. Both youths have to stay away from one another, and can't be under the influence of drugs and alcohol.

Near drowning in Squamish leaves man in serious condition

A 72-year-old man was flown by air ambulance to Vancouver in serious condition after he nearly drowned at a home in Squamish on July 12.

Acting Sergeant Eric Rochette of the Squamish RCMP confirmed that the man nearly drowned in a pool at his home.

"The patient was conscious," Rochette wrote in a news release. He added that the RCMP's involvement was simply to assist in making sure the landing site was safe.

— With files from John French