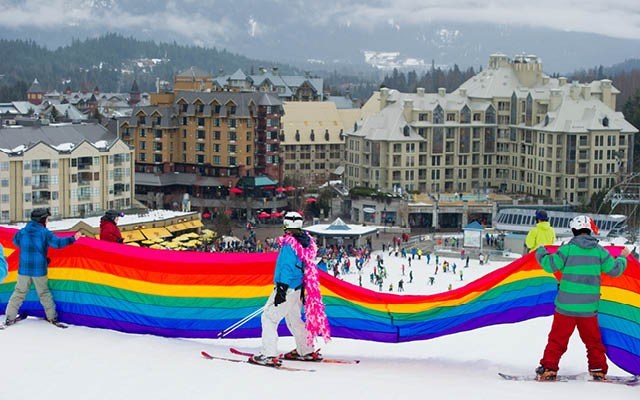 When it came time to refresh the WinterPRIDE brand, Dean Nelson decided to focus on the appeal of Whistler itself.

"Back in 2006 we were the only winter pride around the world, and now there's over a dozen," Nelson said.

"I think we're up to 14 or 15 winter prides around the world, and not all the winter prides happen to be gay. They're just proud that it's winter, apparently."

To avoid brand confusion, Nelson — CEO and executive producer of the long-running festival — decided to bring it back to basics.

"We thought, 'Let's just own the name Whistler,'" he said. "Whistler has a very sexy appeal anyway, so let's just call it Whistler Pride and own it."

The revamped Whistler Pride and Ski Festival kicks off Saturday, Jan. 24 for its 23rd iteration.

In recent years, the festival wasn't able to secure funding from the Resort Municipality of Whistler (RMOW) in time to book a headline act.

This year, the RMOW reworked its schedule so it could provide $25,000 from the Festivals Events and Animation fund.

"They were able to release the funds early for us back in September, and so we were able to get on the phone right away with a couple different agents," Nelson said.

As a result, the festival has booked comedian Margaret Cho as its headline act, set to perform at the Whistler Conference Centre on Wednesday, Jan. 28.

"It's given us a full six months to get the word out there that Margaret Cho is coming out and she's going to be doing a brand new show," Nelson said. "She's really excited about it, and there's just some really positive buzz about it."

Acting Mayor Jack Crompton said it was important for the RMOW to help the festival secure its headline act.

"Events like Whistler Pride are critical to the economic and cultural success of our resort, for sure," he said. "I think with the long-running nature of it, it's a big deal. The organizers have been with us for over 20 years, they've committed to us in a way that's pretty significant. They bring a demographic of people who love this place and love the mountains, and add their own piece of culture to our community."

A 2012 economic impact study found that the festival contributes $9 million to the local B.C. economy with guests coming from 26 nations. Of the Whistler Pride guests, 71.1 per cent are return guests and over 31 per cent of the guests have visited Whistler two or more times throughout the year. Of the guests, 98 per cent are destination visitors.

The culture of inclusiveness is one that Nelson encourages everyone to take in when the festival is underway.

Whether it's seeing Margaret Cho, hitting the dance floor or even just attending the pride parade, Nelson said there is a lot to take in.

"The pride parade on Friday is always a lot of fun, and it's open to everybody. There's no cost, you just have to show up and be there and be proud of who you are," he said. "I think that's what's really important, and I think that's what makes our festival kind of special, is the grassroots nature to it and being accessible to most everybody."

This week Nelson also submitted a letter to council asking that it proclaim Jan. 24 to Feb. 1 as "Pride Week" in the resort, which it did.

"When a municipal government takes the extraordinary step to acknowledge the LGBT community to ensure her citizens and visitors feel safe and diversity (is) embraced, it signals that this destination has created an atmosphere where we can be ourselves," Nelson said in the letter to council.