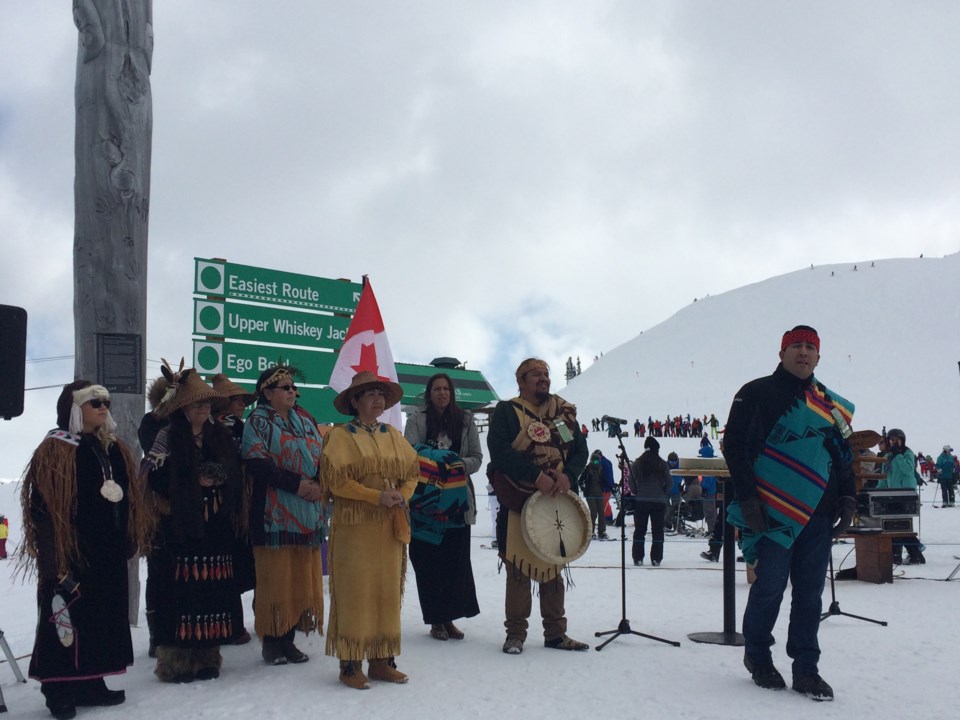 Members of the Squamish and Lil'wat First Nations at a ceremony April 9, 2017 marking the signing of a partnership with Whistler Blackcomb as part of its 60-year Master Development Agreement. File photo by Brandon Barrett

A new Framework Agreement signed by local First Nations, the Resort Municipality of Whistler (RMOW), Whistler Blackcomb and the provincial government provides a pathway to reconciliation, according to the signatories—but the conversation is far from finished.

The agreement—signed on June 15 and announced by the province on June 26 following the adoption of Whistler’s updated Official Community Plan—expands on and supersedes previous understandings between the parties, including a Memorandum of Understanding (MOU) signed in 2017 and a Protocol Agreement in 2018.

It details the Emerald/Kadenwood land exchange, the formation of an Economic Development Committee and the potential development of Whistler Blackcomb Option Sites in partnership with the Nations—all of which were first mentioned in the 2017 MOU.

“We’re creating a path forward around reconciliation, and unlocking the economic potential of the two Nations’ lands that we have within the valley,” said Squamish Nation Councillor and spokesperson Chris Lewis.

“[It’s] creating a pathway forward in terms of how we would get there for the mutual benefit of everybody involved.”

Key to the agreement is the Economic Development Committee (EDC), which is fundamental to the ongoing relationship between the parties, said Lil’wat Chief Dean Nelson, in an email.

“In addition to the Working Group that was established by the previously signed MOU, the Economic Development Committee is another way of ensuring that First Nations’ interests in Whistler are continually heard and understood,” Nelson said.

Where the MOU laid out key interests to be explored, “this is where we’re committing to these arrangements,” said outgoing Whistler chief administrative officer Mike Furey.

“It’s an agreement between the parties that really provides for greater opportunities for the Lil’wat and Squamish to work with Whistler and the RMOW on economic development, tourism opportunities, and promoting cultural awareness.

“Really, in my mind, it’s a reconciliation agreement between our communities.”

With the Kadenwood/Emerald swap (which was a straight land exchange, meaning no money was included), the RMOW will receive the lands adjacent Emerald Estates, allowing it to finally restore access to the trails and other recreational opportunities in the area.

The Lil’wat and Squamish will receive lands in the Kadenwood area—about nine hectares adjacent the existing development—on which the RMOW will support a new site-specific zone for “site sensitive and slope-responsive development of a mix of low- and medium-density detached duplex and townhouse dwellings that may also be used for tourist accommodation, with auxiliary residential dwelling units for employee housing,” as laid out in the OCP.

“The Nations undertook a land-use planning exercise to get an understanding of what the land may support before approving this agreement,” Nelson said.

“The land supports a development of between 40 and 60 units and the plan is to have a development that fits into the existing neighbourhoods. The Nations will have to rezone the parcel and the community of Whistler will have an opportunity to review and engage at that time.”

Asked about the development value of the Kadenwood lands, Furey said it would depend on the timing, and how the Nations choose to pursue development.

“If you look at that schedule in the OCP, it does talk about the opportunity for single-family dwellings, low- to medium-density in there,” he said. “So I don’t have any estimate on what the value would be, and it would be reflective of what the market is and the costs of servicing the lots, etc.”

In terms of quantifying what the economic potential actually is for the Nations, there have been no targets laid out in terms of things like job creation or revenue growth at this point, Lewis said.

“We’re going to have to have those discussions with the RMOW in terms of … density and build out, and all of those types of things,” he said.

As for the Option Sites, the agreement states that “the Parties agree the [committee] will explore appropriate development opportunities that may be undertaken in joint venture between the First Nations and Whistler Blackcomb within the CRA Lands, including the Option Sites and South Base to seek mutually agreeable outcomes.”

The sites have been included in Whistler Blackcomb’s Master Development Agreement with the province for some time, Furey noted.

“Those particular sites are called options because the mountain has an option to purchase them from the province,” he said.

“I know of no plans that the mountain has, or a timeline to look at developing those, but I can tell you they would go through a full rezoning process, and there would be obviously extensive community engagement on any development of those sites.”

Asked about the appetite from Vail Resorts to move forward on the sites, Whistler Blackcomb’s director of community and government relations Sarah McCullough said the company is “laser focused” on its summer operations and the upcoming winter.

“I think with what we don’t know, and what remains to be seen about the longer-term impacts of COVID-19, we don’t know what that means,” McCullough said.

“And so I think it remains to be seen what that means for South Base (and the other Option Sites).”

Vail Resorts has been focused on investing in existing infrastructure, she added, pointing to recent projects like the Blackcomb Gondola and upgrades to various lifts as one example.

“Any development of the Option Sites including South Base would be guided by the new OCP, but right now we’re laser focused on Day 2 of summer [operations] and beyond.”

From the Squamish Nation’s perspective, developing the sites would be a longer-term project, Lewis said.

“Those are things that are a number of years out, that we need to start having discussions with the [RMOW] in terms of how does it fit in with the OCP, how does it fit in with all of our goals and desires in relation to ensuring that we keep the integrity of the community, [and] keep the structure of a world-class resort,” he said, adding that it would be a matter for the EDC to discuss.

“We’re really going to leave it up to the EDC to kind of figure out what the timeline is going to look like in terms of what’s going to be workable for all parties, in terms of ensuring that we get to a spot that’s mutually beneficial to everybody, and that it works within the growth of the resort, the growth of the valley and all of those types of things.”

Added Nelson: “The Option Sites are identified in the OCP Schedule for First Nations development interests, however, Whistler Blackcomb will be taking the lead on these sites in the future.”

The EDC will be made up of one rep each from the Lil’wat and Squamish Nations, as well as two from the RMOW, and will serve multiple purposes: overseeing progress on the Kadenwood development and other projects; seeking longer-term development opportunities for the Nations on lands they own or may acquire in the future; facilitating an open and ongoing dialogue between the parties; and carrying out other responsibilities related to economic development opportunities for the First Nations.

In the longer term, the committee will consider: the parties’ commitment to reconciliation, acknowledging that it has an economic component; tourism trends, market indicators and market demand (including affordability); Whistler Blackcomb’s MDAs and Master Plans, and the Option Sites identified within them; the need to balance resort and community capacity; and the growth principles outlined in Whistler’s new OCP.

The agreement states that the EDC will meet at least once annually, and will attempt to make decisions by consensus. If consensus can’t be reached, the committee will proceed by majority vote, with the RMOW entitled to two votes and one each for the Squamish and Lil’wat.

The EDC will provide updates and recommendations to the parties’ respective governments as required.

While the core of the agreement is focused on the various economic considerations, the document also contains commitments from the RMOW to: promote a greater awareness and knowledge of the First Nations’ history in the valley; develop policies to protect archeological, heritage and other cultural sites; include the Nations on trail planning and maintenance; and strengthen the pedestrian experience between Whistler Village and the Squamish Lil’wat Cultural Centre.

The agreement between the parties is “historic,” said minister of municipal affairs and housing Selina Robinson, in a release.

“After many years of negotiations and a lot of work on the part of the Squamish and Lil’wat Nations, the province, Resort Municipality of Whistler and Whistler Blackcomb, I am excited to see this agreement finalized,” Robinson said. “This step empowers the community to move forward with its partners on planning the future of Whistler, one of B.C.’s cherished resort destinations.”

The agreement also formally removes the requirement for ministerial approval in future updates of Whistler’s OCP.