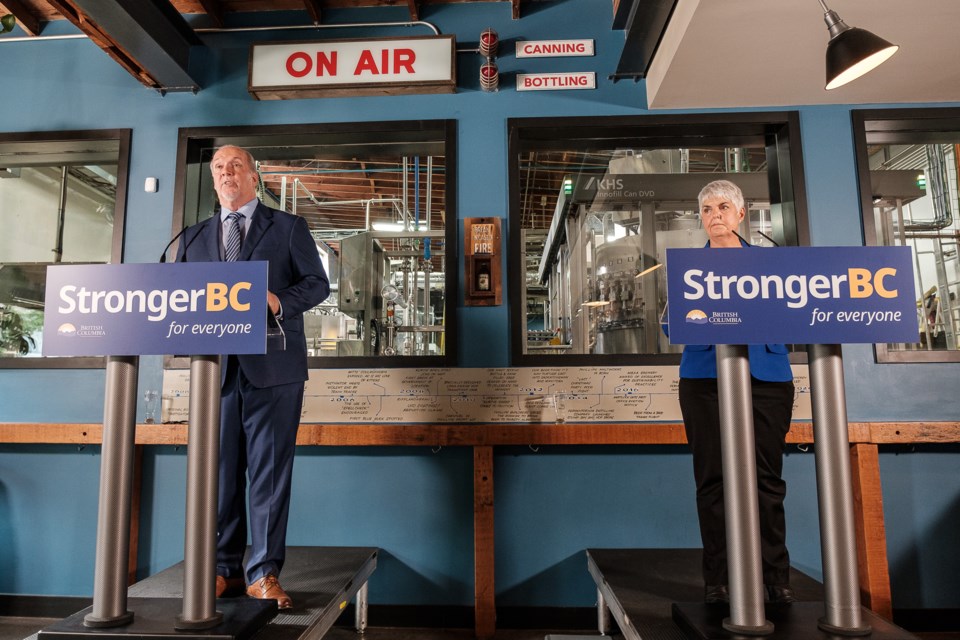 B.C. Premier John Horgan and finance minister Carole James announce the release of Stronger BC for Everyone: BC’s Economic Recovery Plan last week Photo courtesy of the BC Government/Flickr

Local and regional tourism officials welcomed the more than $100 million specifically earmarked for the industry as part of the NDP’s COVID recovery plan announced last week, but warned that more money will be needed to maintain the viability of the hard-hit sector in the coming months.

“We’re very appreciative of all the support to date because we recognize there has been a lot of hands out looking for funding support, but without a doubt, tourism and hospitality have been the hardest hit.”

Announced as part of the NDP’s roughly $1.5-billion economic recovery plan on Thursday, Sept. 17, the funds set aside for the tourism sector include: $50 million for a new Tourism Task Force that will seek innovative ideas on how to best position the industry for 2021; $19 million for tourism-dependent municipalities to build, adapt and diversify their tourism infrastructure; $14 million to targeted tourism development partnership initiatives in B.C.’s six tourism regions that support the industry’s recovery; $5 million to Destination BC to continue to market B.C. domestically and internationally; and $20 million for tourism infrastructure projects supporting destination development, part of B.C.’s $100-million Community Economic Recovery Infrastructure Program.

While it’s still well below the $680 million originally proposed for the industry by the Tourism Industry Association of BC, Canada West Ski Areas Association (CWSAA) president Chris Nicolson said that many tourism-related businesses can still capitalize on other components of the recovery plan, namely the $300 million in small-business recovery grants.

“It’s not only for tourism, but businesses across the board are trying to get through and manage with what they can and try to survive,” he said.

In July, CWSAA, alongside B.C.’s Resort Municipality Initiative communities, of which Whistler is one, floated a recovery plan calling for government grants to be spent on “shovel-ready” infrastructure projects as a way to stimulate local economies and hiring during the pandemic.

Whistler Mayor Jack Crompton said there is “a long list” of projects that could fit that bill locally, and that the municipality is currently focused on its “recovery objectives,” which include: developing affordable housing, childcare facilities and staff, wildfire risk reduction, regional transit implementation, and highway upgrades.

A small but important element of the NDP’s approach to infrastructure grants this time around, Nicolson explained, was that it allows non-government entities to apply for funding.

“Often in previous programs, it had to be a formal municipality or a formal regional district in order to make those applications,” he said. “Now, it might be a chamber of commerce, it could be a resort association, some sort of formal entity within a community though they might not be an official municipality.”

Crucially, multiple applications can now come from the same municipality or regional district as well.

While supportive of the emphasis on infrastructure projects, Fisher was quick to remind that, quite often, those projects require significant investment, placing even more strain on an already cash-strapped industry.

“When we’re talking about cities and resorts upgrading their infrastructure and investing in important things like housing and ensuring that we’re setting ourselves up for success, well, the funding needs to be in place,” she noted. “That’s where some of these grants are absolutely moving in a positive direction, but the investment needs to be sufficient not only to get these projects off the ground but to actually make them happen.”

With the winter inching closer, Nicolson said Western Canada’s ski industry has been looking to resorts across the globe to identify best practices ahead of the 2020-21 ski season.

“Australia and New Zealand have been able to show that operating ski areas and having a ski season in the midst of the pandemic is possible,” he said. “From a consumer standpoint, one of the big things to convey there is … to ‘know before you go.’ Things will not be the same. In order for ski areas to open and operate, procedures and best practices have had to adjust. So from a guest perspective, understanding what those procedures are at their area, if they’re going on a vacation or to their local area, is really important.”

For a full breakdown of B.C.’s recovery plan and its relevance to tourism, visit news.gov.bc.ca/factsheets/covid-19-economic-recovery-plan-boosts-bc-tourism-industry.