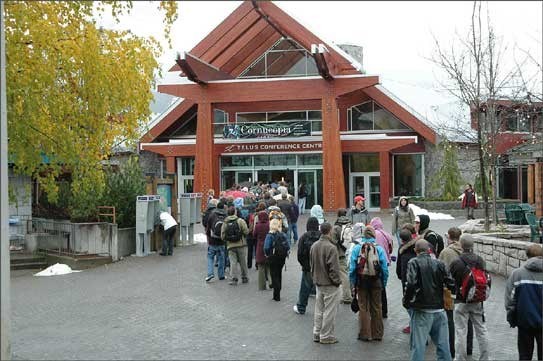 Employees line up for 2004 job fair. Photo by Justa Jeskova

The labour shortage in Whistler has prompted the Chamber of Commerce to hire a full-time recruiting specialist to help develop hiring strategies for members.

“Businesses are struggling to keep the business they have got and it really comes down to the staffing issues, and so what we did was hire a recruiting specialist,” said chamber president Louise Lundy.

Randall Butler is an HR specialist who previously owned his own international recruiting agency. He has spent the last 10 years sourcing talent worldwide.

For now Butler is working in Vancouver drumming up potential employees to come to the chamber’s job fair Oct. 31 and Nov 1. But by November he will be in Whistler.

“His role this month is to try and get as many people to that job fair as possible so that all employers will have someone to pick from,” said Lundy.

“When he comes to town there will be meetings with various employers (and we will) survey our membership to try and get as much feedback as we can from employers as to what their issues are, what kind of employees they are looking for, and what are the gaps in labour that we need to know about.”

A recent labour market report by go2, the B.C. tourism industry’s human resources association, concluded that labour shortages in the Sea to Sky corridor will get much worse over the next decade. It found that tourism operators need to attract an average of 3,500 workers every year from outside the region. This number does not include any of the skilled trades needed in the valley including landscapers, construction workers, mechanics, electricians, plumbers and so on.

Whistler, like other places across the country, is finding the labour shortage is not particular to them. It is a national and even international phenomenon. It is being driven by many factors, including an aging workforce, highly competitive employment fields, fewer young people entering the workforce, and in the Sea to Sky region, the high cost of living.

The chamber strategies will focus on several different fronts, including targeting new workers, such as students, in the hopes of drawing them to Whistler in the future, expanding recruitment nationally and internationally, helping employers learn ways to retain workers, working with partners on affordable accommodation and transportation and determining the labour requirements for the 2010 Games.

Lundy said while the main focus of the strategy will be the tourism sector other segments of the community will also be included, such as construction.

And it’s hoped that the strategies will help small businesses in particular as they are the ones which often struggle with the resources to advertise outside of the local papers and are often unable to reach out to employees in other locations using non-traditional sources.

That’s good news for business people such as Mark Dipple co-owner of Java at Nesters, a popular coffeehouse and restaurant.

In recent months Dipple has had to start closing his business at 5 p.m. and is running on a skeleton schedule. It’s a story he is hearing repeatedly from his customers.

“It’s not isolated to any one sector of Whistler’s business, it is an over all labour shortage.”

A Whistler business owner for 10 years Dipple said he has never seen the labour shortage as acute as it is now. While cautiously optimistic for the winter he is concerned about the trends affecting the resort.

He points to the closing of the Shoestring Lodge — which not only provided affordable housing but also brought foot traffic to his shop where he posts his job opportunities; challenging snow years for the resort; and fewer seasonal workers coming to Whistler early.

Dipple worries the customer will feel the impact first.

“I am very concerned for Whistler as a whole because I think service will suffer as a whole,” he said.

“All of the services are going to be understaffed so the staff that are there are going to be stressed and the cumulative effect is that Whistler as a whole suffers on a customer-service level.”

None of this is news to the resort’s biggest employer, Whistler-Blackcomb.

“We are looking at a decade of shortages,” said Liza Walli, recruitment manager for Whistler-Blackcomb.

“It is not the luxury of this season or next. This is long term.”

Because of the labour shortage Whistler-Blackcomb has been out pounding pavement in Canada and overseas for months to get staff lined up, in the hopes of avoiding the shortages of last season.

The recruitment drive started a month early this year, Sept. 5, and this month’s job fair, Oct. 23 through 26, is shorter than usual so that recruiters can spend time in Ontario and Quebec hiring staff.

More perks are also being offered to Whistler-Blackcomb staff including offering the cheapest staff housing in the resort.

Walli said there have also been more people applying from outside of Canada for jobs, though Whistler-Blackcomb hopes for a strong Canadian crop of employees as it looks to keep workers from year to year.

Already Whistler-Blackcomb has lined up 1,535 interviews for the job fair using the Internet and has hired 300 plus people from overseas.

And it’s not just happening here. Christopher Nicolson of Sun Peaks Resort said on-line applications have made a real difference to find workers.

“There has been more recruitment from overseas, Australia and Brazil,” he said.

Sun Peaks is also starting a shuttle service for workers in Kamloops, about 45 minutes away, to try and tap into that labour market too.

“Why can’t we just build 400 apartments that kids can rent for the winter?” said Carrell, who has largely secured his winter staff.

“With the construction for the Olympics more beds are getting taken up by those guys who can afford to pay more rent, as they are making a lot of money doing these Olympic projects.”