Release of smolts another step in river's recovery

Rehabilitation of Cheakamus continues but officials still awaiting TSB report on derailmen
May 18, 2007 2:27 AM By: Bob Barnett 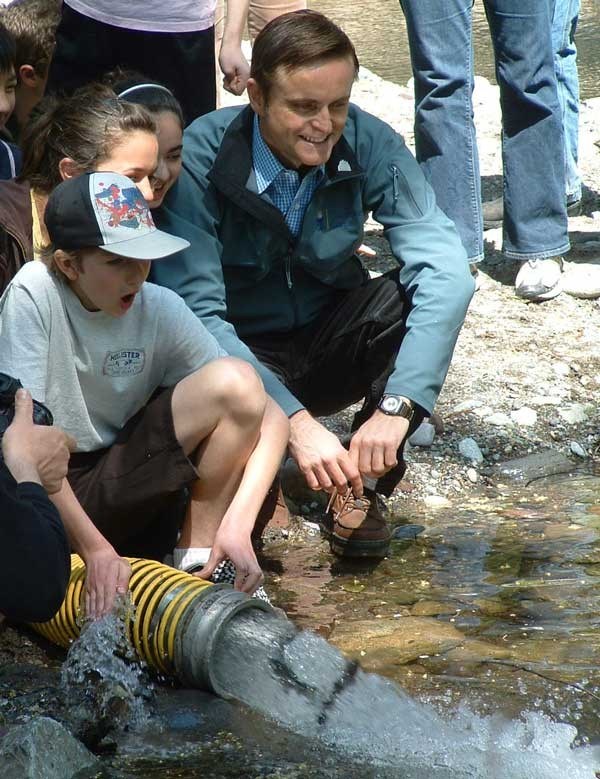 Taylor Robins (front) and other North Vancouver Outdoor School students with Environment Minister Barry Penner at the release of steelhead smolts on Friday, May 11 near Squamish.

Local and provincial politicians joined students from the North Vancouver Outdoor School Friday in releasing thousands of steelhead smolts into the Cheakamus River, another step in what could be a 50-year process to rehabilitate the waterway.

The release, one of three this spring that will see 20,000 hatchery-reared smolts introduced to the river, comes 21 months after a Canadian National Railway train derailed in the Cheakamus Canyon, dumping more than 40,000 litres of caustic soda into the river and killing an estimated 500,000 fish.

“This is sort of a sexy fish, this is a high-profile fish,” Squamish Councillor Patricia Heintzman said following the release of the 20 cm smolts in a side-channel of the Cheakamus. “Things like the sculpins are going to be harder to bring back because the money isn’t there necessarily and people don’t see them. But they are a vital aspect of the ecosystem so those things might be slower too.”

Friday’s release was a positive step in the recovery of the Cheakamus, but there are still many questions surrounding the spill and the rehabilitation program. Although CN is funding the recovery program no representative from the railway was at Friday’s release and Squamish Mayor Ian Sutherland said there have been challenges dealing with CN.

As well, a Transportation Safety Board report on the Aug. 5, 2005 derailment is still not available and the two-year statute of limitations on suing CN nears.

It also took considerable pressure before the B.C. Ministry of Environment agreed to go ahead with a steelhead recovery program in the first place.

“The river has been recovering naturally and there are wild steelhead and other species in the river today but we want to give nature a hand to speed up the recovery process,” Penner said.

He added that his ministry has invoiced CN for approximately $220,000 to date.

“That represents our direct out of pocket expenses in responding to the spill in the immediate hours following the derailment but also some of the ongoing planning and rehabilitation work,” he said.

Penner said the side channel where the smolts were released was an example of the kind of work that will be done in the future. “There’ll be some additional work like this to create additional rearing habitat as well as spawning habitat for the steelhead.”

In February CN announced a five-year, $1.25 million partnership with the Pacific Salmon Foundation to implement a recovery plan in the Squamish River. In a press release from CN last week Normand Pellerin, CN’s assistant vice-president, Environment, said: “CN is dedicated to the recovery of fish populations on the Cheakamus River, and this release demonstrates the strength of our partnership with other stakeholders to help make the recovery plan a success.”

But Sutherland said the railway company could be doing more.

“CN has done some good things but there’s also been a lot of challenges dealing with CN, and a lot of frustration with some of the information or lack of information that’s come forward,” the Squamish mayor said.

“I think overall the steering committee’s done a really good job and the technical committee’s done an excellent job working on it. But again, they’ve been tied up a little bit… in some cases the co-operation with CN hasn’t been there and it’s been hard to get the information and move the information forward and probably most important, to keep the community involved, because I think it’s very important that the community gets a big role to play in this, and for whatever reason, that has not been happening. And I think a lot of that has to fall on the fact that the public process is not higher on CN’s agenda for this.”

Penner said the work his ministry is doing is in addition to CN’s involvement in the technical and steering committees and with the Pacific Salmon Foundation.

“Any costs that we’re occurring as a result of the spill that occurred on Aug. 5, 2005 are being documented and those invoices are being forwarded to CN Rail for payment,” Penner said.

As for the TSB report, which could lead to charges being laid against CN, Penner said: “It’s coming.

“I’ve been told that for many months. I can only assume that the Transportation Safety Board is working hard to make sure it’s comprehensive and fulsome in its review.”

He said he had talked with the executive director of the TSB to express the province’s eagerness to see the report.

“So no decisions have been made on charges but that investigation continues and, as you know, there were search warrants issued, about a month ago, for three offices belonging to CN and that’s part of the information gathering exercise.”