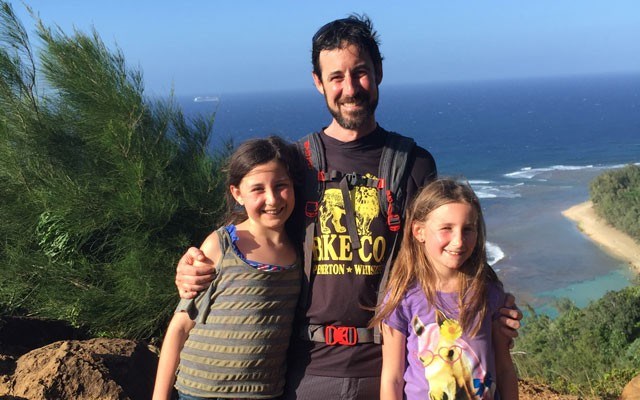 Friday, Sept. 11 dawned in Whistler this year, sunny and full of the promises of the last burst of summer, and everyone wanted to make the most of it.

Marc Davidson was no exception.

He kicked out of work a little early, picked up his daughters, and went to Lakeside Park for a paddleboard and a swim. They grabbed some take-out sushi and had a picnic.

An ordinary day in so many ways, but an extraordinary one too.

As all around them Whistler eked out every last ounce of summer fun, the tight family trio talked.

They talked about 9/11 and their grandfather who died in South Tower of the World Trade Center in 2001.

"It's part of who they are for sure," said Davidson of his daughters.

Fourteen years ago Davidson began a journey of loss, love, agonizing grief, and ultimately redemption in the mountains. It's a journey that begins and ends in Whistler — that stretches to Ground Zero and back.

"That's a big part of why I wanted to come back here, the three of us, to start our next chapter in life, and be in the mountains and enjoy life here and the great community. I'm very happy."

Davidson remembers exactly where he was that day, 14 years ago, another lifetime ago, when the world changed forever. He was in Whistler when his house phone started ringing at 6 a.m., a far-off sound as he hovered between dream state and reality. It wouldn't stop.

Giving up on his roommates, the 28-year-old got out of bed and answered it.

"Turn on the TV," said one of his friends from university — a plane had flown into the North Tower of the World Trade Center.

Davidson, who was then working in the marketing department at Whistler Blackcomb, hung up and called his best friend to come over right away. And then... "I started trying to call my dad," recalled Davidson this week.

Lawrence "Larry" Davidson was in the South Tower, on the 92nd floor, an insurance broker for Aon. He had taken the job at the World Trade Center just weeks before.

But he never answered those frantic phone calls from his son.

"We were watching as the (second) plane hit, and I saw where the plane hit and it was pretty much right where his office was, so I had the feeling that he was pretty much killed at that point," said Davidson.

Almost 3,000 people died at the World Trade Center — 343 firefighters, 23 New York City police officers, 37 Port Authority police officers who were all trying to save the office workers trapped inside the buildings. Workers like Larry Davidson.

A world away in Whistler, Marc Davidson was in a haze of disbelief. Whistler Blackcomb rallied to help with a grief counsellor. Davidson's brother drove up from Tacoma, where he was studying and together they managed to fly to Toronto. That would be the start of their long journey eastwards.

The brothers met up with their mom and stepfather in Toronto, and drove to New York, arriving five or six days after the attack.

They met with detectives, filed a missing persons report, and gave DNA samples for eventual identification. They saw the missing person poster, like so many desperate posters around New York City, except in this one Larry Davidson beamed out, carefree in a teal sleeveless shirt. The scrawled black marker beside his picture a window to the desperation: "last seen" and "please contact."

The family was taken to the wreckage at Ground Zero.

Davidson said he didn't feel anger or the need for revenge; he didn't want to go to war and fight the enemy, the prevailing emotion of the day in the U.S. at the time.

He didn't know it then, but months later the 9/11 attacks would help prompt his best friend's older sister, Sylvia, to make a confession, a need to tell him how she felt about him in light of how quickly life can change from one moment to the next.

Davidson moved to Ontario to be with Sylvia. They got married and started a family, settling into the rhythm of family life.

Seven years later there was another phone call, out of the blue; Larry Davidson's remains had been positively identified.

"They were recovered in December '01, (but) they weren't able to indentify them then and they froze them," said Davidson. "And then new techniques came out in 2006, and they started re-testing and he was one of the ones that was identified."

"For sure it was nice to have a final resting place for him that wasn't at Ground Zero, and to have the closure that they found him," he said.

But when the family began to get subsequent phone calls that more remains had been found, it was very challenging. Davidson had hoped his father had died on impact, that there was nothing left.

The family asked not to be notified again. He has since learned that his father, a hippie back in the '70s who spent 12 years in Israel on a kibbutz, was helping others to safety when he died.

But tragedy was to strike again. This time, however, it came from within. Almost five years ago Davidson's wife lost her battle with mental health and depression and he was left to raise his two young daughters.

"I'm done with loss like that," he said simply.

He moved back to Whistler in August 2013 with his daughters, a place that rallied to help him in the days and weeks following the terrorist attack, a restorative place to find peace.

"It definitely changed the way the world is," he said, of the 9/11 attacks.

The Davidsons did nothing out of the ordinary on the 14-year anniversary of 9/11, except savour the most out of the last blush of summer.

They remembered Larry Davidson, their dad and grandfather. He was 51 years old when he died.

And they remembered all the others.

Davidson's youngest daughter is part of the Big Brother/Big Sister program in Whistler. Her Big Sister is an RCMP officer. She was over last Friday, on the anniversary.

Davidson said: "I always make a point to thank those kinds of folks on that day."