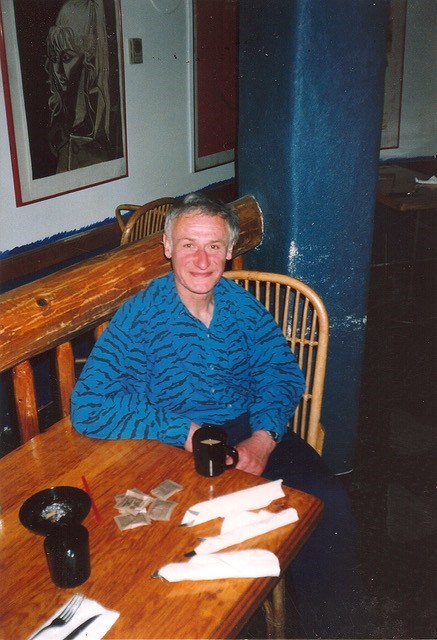 In a town of Whistler's size, it's easy to recognize your neighbours.

Faces become familiar from the grocery store aisles, coffee shops, sidewalks and trails, even if you don't know them by name.

For one longtime Whistler resident, Alain Goebl, that particular kind of familiarity led to a nickname: "Mr. Coffee."

Over the years, Goebl developed a habit of heading to a local cafe; and ordering a single cup of coffee.

"Of course, the Canadian tradition used to be you would get free refills," explained Joan Richoz, Goebl's longtime landlord and friend. "He would buy one coffee and he would sit there for about two or three hours getting refills.

"He'd just drink coffee all day-half of the cup would be cream and the other half would be sugar ... that's how he got (the name) Mr. Coffee."

Goebl passed away on April 16.

Over the course of his nearly four decades in Whistler, Goebl became a character that many locals recognized, but few knew well.

He was born in Austria in 1940 and moved to France in 1946, where he lived until immigrating to Canada 1964. He worked for several years in Vancouver before moving to Whistler in 1981. Goebl's story is similar to that of many locals: he came to visit his brother, a good friend of Richoz and her husband Marcel, and never left. He lived in a studio the Richozes fixed up for him on their Alpine Meadows' property since he first arrived in Whistler 37 years ago.

Although he was a machinist by trade, he took up various odd jobs, including dishwashing at establishments like the Bearfoot Bistro and Citta's (the space that now houses the Beacon), until landing a job in his field, helping make custom bikes and parts for Maurice Lavoie in Pemberton.

It was a fitting gig for Goebl; many longtime residents will remember seeing him riding his bike around town, in recent years, wearing an oversized ski jacket. "He'd be wearing that winter, summer, day night-because it usually had lots of pockets he'd put all his stuff in," recalled Richoz.

Despite his quiet demeanour, Goebl became a beloved figure in the community. "He was different, you know, and he was just one of those people that people saw all the time, because he would either walk (or bike) everywhere—he'd often walk to Pemberton and back," explained Richoz.

She recalls countless instances where the community rallied to support him, whether that was replacing his bike after it was stolen or passing around a hat in Tapley's to collect money to replace his groceries after a bear got into the grocery bags he had left by his bike outside. A few years ago, the servers at Citta's even bought him a meal and a sympathy card after Richoz' dog—who Goebl adored and would often accompany him on his walks to Pemberton—passed away, leaving him heartbroken.

"That's the way people were to him," Richoz said. "He was just somebody you couldn't help but feel affection for and want to help in some sort of way—even though he never really wanted any help from anybody."

While Goebl often found himself on the receiving end of Whistler generosity, what most people didn't realize, explained Richoz, was just how generous he was himself—despite having little to begin with.

In addition to sending money to family members back in France—probably "half the money he got for his pension," said Richoz—he became part of the Richoz family over the years, helping with construction projects, bringing in groceries and even babysitting. "Even though he was a bit odd, I never worried about having him babysit because he would have given his life to protect our kids ... He was way more than a tenant or a friend," Richoz said.

After suffering from stomach problems in recent years, Goebl was admitted to a palliative care bed at the Squamish General Hospital earlier this month, where Richoz said he received excellent care before passing away peacefully. "He had sort of spiritual beliefs, too," she added. "He said he was going on 'the big trip'—'la grande voyage.'"

Richoz is inviting the community to come share their stories and remember Goebl next Sunday. The memorial will take place at the Alpine Cafe on May 6, from 2 p.m. to 6 p.m.