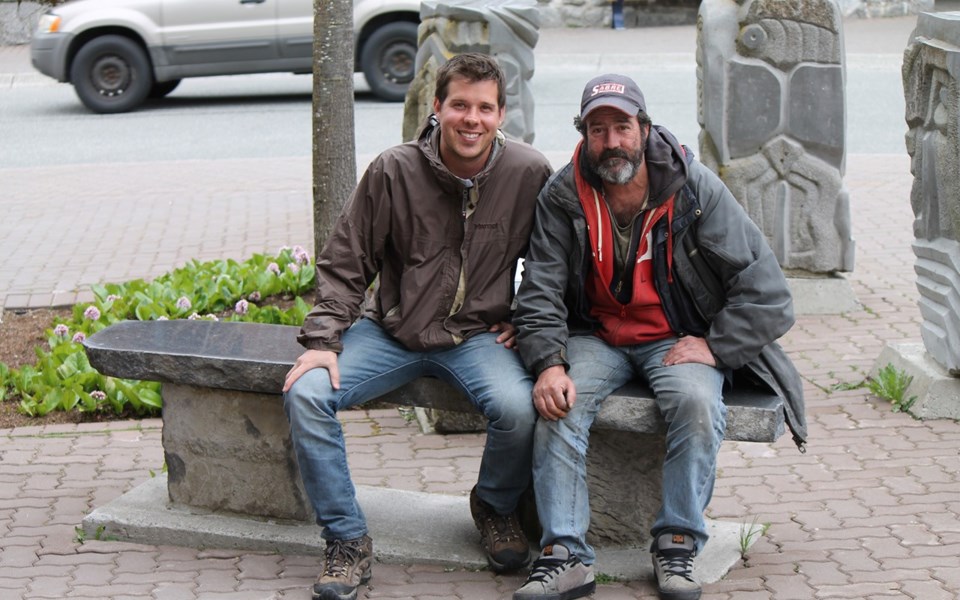 By any literal definition, Sylvain Travers was homeless.

But the reality of living without a roof over his head didn't diminish the pride he felt and the relationships he built in the community he chose to call home.

For the past decade, Travers endured as one of Whistler's most recognizable characters, a fixture around the village hotspots he typically frequented—the library, McDonald's, the benches behind the post office—where he could usually be found with a fresh beer, a cigarette and a joke for anyone who took the time to listen.

The 54-year-old was found dead in his van on Saturday, June 23 after a long string of health issues. At press time, no cause of death had been confirmed.

At a memorial held last week at the Whistler Community Services Society's (WCSS) new Nesters Road facility, Travers was remembered by those closest to him as a man who loved his community and, perhaps above all else, was never afraid to speak his mind.

"He was brutally honest," recalled longtime friend Don Meyer, who first brought Travers to Whistler years ago. "But it didn't matter because I still love him—and he was right. He was always trying to guide me. He cared. I'm always gonna miss that about Sylvain; he did that with kids, he did that with everyone."

For Taylor Macdougall, it was that candour that he said helped him become a better outreach worker at WCSS. "We had hundreds of conversations behind the post office, and from time to time he would sit me down and give me feedback or a critique or something that he noticed," he recalled. "It really made me reconsider what it means to be an outreach worker and what it means to be a good person and a part of this community."

One of Whistler's most visible homeless people, Travers took it upon himself to serve as a link between the resort's vulnerable population and the local resources that were available. He would regularly call WCSS for help, whether it was for a box of food, warm clothes, or Re-Use-It Centre coupons, and "nine times out of 10, it wasn't that he wanted support, it was someone he knew that needed support." Macdougall said.

A Quebec native, Travers made the move out West in 2007 after his marriage ended, the roofing company he owned went under, and his father died. He lived on his boat in Squamish for some time, but after a serious illness, decided to relocate to Whistler in his camper van.

Despite his tenuous housing situation, Travers chose to remain in Whistler over the years.

"If he wanted to go to Vancouver and hang out with the drug addicts on East Hastings, he could've done that. But he didn't want to. He had friends here and he had a life here," explained Nina Stenham, who got to know Travers while working at Coast Medical Clinic in the village. "When people got to know him and found out who he was, it was an interesting insight into another way to live in Whistler."

Travers was a constant reminder that Whistler is more than just a playground for the wealthy, and it was a role he played with pride, said Chris Dickinson, who worked with Travers on a documentary in 2014 on homelessness in Whistler.

"Anytime you meet somebody in a vulnerable position, it's easy to jump to conclusions and make certain assumptions," Dickinson said. "I think it's important to remember that Sylvain was a very important human being and there will never be anyone like him. The community has a bit of a hole now without him."