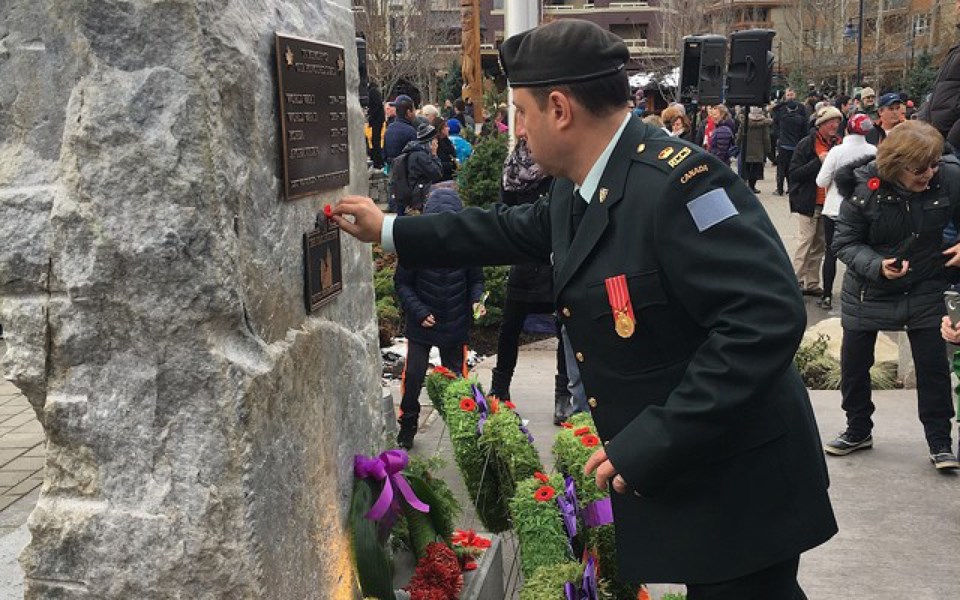 LEST WE FORGET Whistler's annual Remembrance Day service is to take place this Sunday at Whistler Olympic Plaza. FILE PHOTO BY CLARE OGILVIE

This Sunday, Nov. 11, will mark a full century since the First World War came to an end.

Here in Whistler—100 years to the date when Germany formally surrendered—residents, visitors and veterans will gather at 11 a.m., on the 11th day of the 11th month, at the cenotaph in Whistler Olympic Plaza to mark the occasion and to remember the more than 116,000 Canadians who made the ultimate sacrifice for their country.

The annual ceremony "gives the local residents an opportunity to honour those who've served in war and allowed us to have our freedom," said event organizer and committee chair Steve LeClair.

Following tradition, Whistler's Remembrance Day service is set to begin at 10:30 a.m. with the Veterans' Parade and Colour Party. Participants will march from the Ted Nebbeling Bridge down Village Stroll to the cenotaph, where attendees will be gathered. The Whistler Singers and Whistler Children's Chorus will be on hand to perform songs of remembrance, as well as to lead the crowd in renditions of "O Canada" and "God Save the Queen."

The program will include a performance of "The Last Post" and "The Rouse," a helicopter fly past from Blackcomb Aviation and a cannon firing, as well poetry readings, a presentation of wreaths and a reading of The Act of Remembrance, before the event concludes with a community reception.

This year's ceremony is the first since the mid-'90s that won't be organized by long-time director Brian Buchholz. Though LeClair has been tasked with the parade portion of the event in previous years, he's agreed to take over the helm from Buchholz for 2018.

Leading the annual ceremony for so many years was "very, very rewarding," Buchholz said. "(It was) just time to hand it off and I think the program's in pretty good shape," he added.

With 2018 marking the 100th anniversary of the end of the First World War, "it's a very big anniversary and I've had uncles that have served in World War II so it's very special to me," LeClair said.

"It's my first year doing the lion's share of the work so (Buchholz is) certainly mentoring me through it."

This year also marks the second that Whistler's Remembrance Day ceremony will take place at the cenotaph at Whistler Olympic Plaza since being moved from its previous location at the Whistler Fire Rescue Service parking lot near Municipal Hall.

"Having the new space is very beneficial; it gives us a lot more room and makes it much better for the parade to end up there," said LeClair, adding that he expects to see about 70 participants representing veterans, RCMP, firefighters and active military marching in the parade.

In a testament to the event's growth, Buchholz recalled recently stumbling across a photograph of a Remembrance Day ceremony, "probably from the late '80s" that showed no more than 25 people at the cenotaph—a strikingly smaller crowd compared to the nearly 1,200 attendees the ceremony has drawn in recent years.

"It's not better because it's bigger, it's not better because there's more people. It is rewarding for our veterans and our serving members that they are being recognized and people want to express that recognition," Buchholz said. "The community and visitors wanted to attend so that's a positive thing. The new location is just stunning. It turned out better than we could have imagined."

With Remembrance Day ceremonies taking place from coast to coast, it's that community-driven nature of the event that's made Whistler's annual ceremony so special, said Buchholz.

"It's just a simple recognition of sacrifice and remembrance, and it's done (in) just (a) so very heartfelt and meaningful (way)—both the people who put the pieces together and also the people that attend," Buchholz said. "I hope that tradition will continue."

Those wishing to volunteer or place a wreath on Remembrance Day can contact LeClair at steve.leclair@shaw.ca.