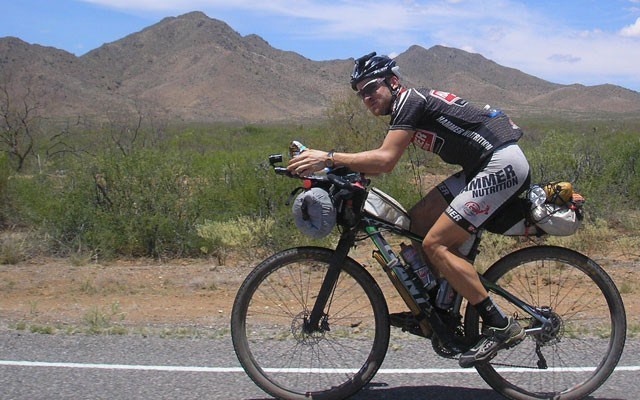 He's ridden the Pan-American Highway — for all intents and purposes, the longest road in the world — from Alaska to Argentina. After his last high-school math exam, he hopped on his bike — stored conveniently at the back of the gymnasium — and rode from Calgary to visit his then-girlfriend in Arizona. And he's still, unfortunately, feeling the effects of a Guinness World Record chase for stationary bike endurance riding.

The adventure cyclist, who is now based in Burlington, Ont., was in Whistler on Wednesday, Sept. 10 giving a wellness presentation at Nesters Market and sharing stories from his recently published book

Decked out in gear for Hammer Nutrition — he and fiancée Sarah handle the company's community engagement — Correy explained how he's learned to take care of his body while competing. He started from a typical kid's snack diet of pop and chips, progressing to commercial sport products like Gatorade and PowerBars before discovering the more specialized supplements.

Ironically, though, the one race he's done twice — Tour Divide — had him eating candy by the finish.

The race is one where competitors are not allowed to receive any outside help as they traverse the nearly 4,500 kilometres from Banff, Alta. to Antelope Wells, N.M. Though he'd packed supplements for the race, Correy said he could only carry enough for the first half-day and from there he had to rely on what he could nab at convenience stores. For him and most riders, the choice ended up being candy.

Correy touched on several anecdotes from his first book, which was released in May, with the audience enjoying the harrowing tales Correy recounted from his rides, races and record challenges.

But A Purpose Ridden is more than just the recounting of the adventures of a cycling life. It's a father-son memoir — after all, Correy's first strides into cycling were at the behest of his father, who took him on the road for a cross-Canada tour at just 13 years old as part of "manhood training."

Like most teens that age, Correy sulked and resisted, but when he received the offer to pack it in and head home, his resolve hardened.

The book is filled with the push-and-pull between the two as their relationship reaches peaks and valleys, like the ones Correy has traversed all over the Americas.

"The biggest validation is there's a strong father-son thread throughout the whole book with my father getting me into cycling, my father and I having a strong falling-out because of my path to cycling and then encouraging him to come back and help with my crew," he said. "I'm, at the end, singling him out for being a bit of a hard-ass and this and that, but being very appreciative in hindsight for this father that did some pretty neat things with his son."

The writing process was challenging, said Correy, explaining that he was striving to balance telling his own story and talking about his family's struggles in a way that wasn't exploitative. His father warned him throughout his writing that there were certain stories he couldn't share and expect to maintain a relationship with the family.

Correy's father was the first to read the book, and ultimately, he gave it his stamp of approval.

"One morning he finished it and he came up to me and said... 'There will be some things we talk about someday over a beer,'" said Correy. "Ultimately, the interesting thing about writing a story is it's only my account of it.

"I don't write about this in hindsight. I write how I experienced it in the moment, and I said 'Dad, if you can get through all the sensationalized drama as a teenager and get to the end, I think you'll really appreciate it.'"

A Purpose Ridden is available for purchase at Nesters Market or online at www.ryancorrey.com.

Correy described the process of writing his book as basically like a part-time job, as he put in numerous four-to-six-hour days over the course of two years to complete the project. A third year went into editing and tweaking the book.

"I had thought about writing a book at several points after a lot of my trips, but only now did I feel like I had had a full-circle journey to write about," he said.