NDP accused of wooing Greens, shoring up alienated base
Nov 10, 2018 1:00 AM By: Jeremy Hainsworth / Glacier Media 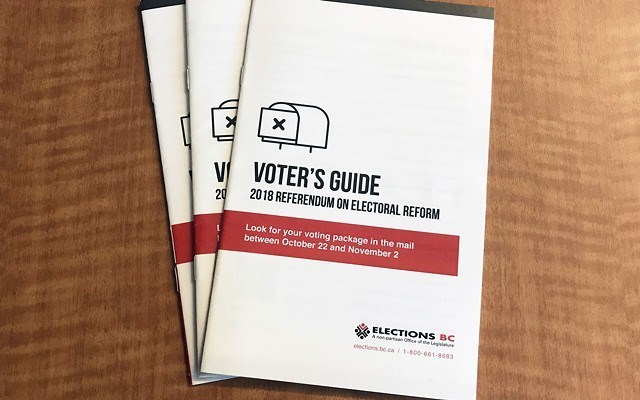 vote British Columbians can mail in their referendum ballot on proportional representation before Nov. 30. PHOTO courtesy of elections bc

The electoral mail-in referendum on proportional representation (PR) British Columbians are now voting on isn't the first and may not be the last.

Proportional representation referendums were held under Gordon Campbell's Liberals in 2005 and 2009. And we could face another one in 2026.

If there is a starting point, it is likely the 1996 provincial election. Glen Clark's NDP won that race under the first-past-the-post (FPTP) system.

But the party's seat number actually fell. Frustrated, they sought where they were bleeding votes. Their eyes fell on the Green Party.

As a result, the NDP developed PR policy. Nothing came of it until John Horgan became leader in 2014.

Clearly, something was amiss.

The current referendum is the third on the issue since the 2001 election.

In 2004, Gordon Campbell's government created the Citizens' Assembly on Electoral Reform. Johnston called it the redemption of a pledge Campbell made to fix the system.

"He felt it was not appropriate to walk away," Johnston said.

After 50 public hearings and 1,063 written submissions, the assembly recommended switching to PR under a concept known as the Single Transferable Vote (STV). The NDP supported the idea.

So, in May 2005, a referendum was held. Voters were asked: "Should British Columbia change to the BC-STV electoral system as recommended by the Citizens' Assembly on Electoral Reform?"

Under that system, the total number of MLAs in the province would not have changed. They would have been elected in 20 multi-member electoral districts with between two and seven MLAs per district, with voters ranking candidate preferences for those slots. To be elected, a candidate would have needed to reach a certain number of votes or an electoral quota.

The vote required two thresholds to be met for change to happen. Neither was met and the vote failed.

That year, the NDP 2005 platform under leader Carole James made no mention of PR.

In May 2009, Campbell's government again polled the electorate on the STV concept.

This time, voters were asked to choose between STV and FPTP. Again, there were two thresholds. Voters rejected the idea in larger numbers than 2005. It failed to meet either threshold.

The NDP 2009 election platform under James made no mention of voting reform.

Now, Johnston said, the Greens are frustrated. They want a system reflecting their popular vote—16 per cent compared to the Liberal-NDP dead heat in the 2017 FPTP election.

This time, voters have two choices. The first question is a simple Yes or No on whether or not to change to PR.

This time, 50-per-cent-plus-one vote in support of PR would prompt one of the three options to be chosen.