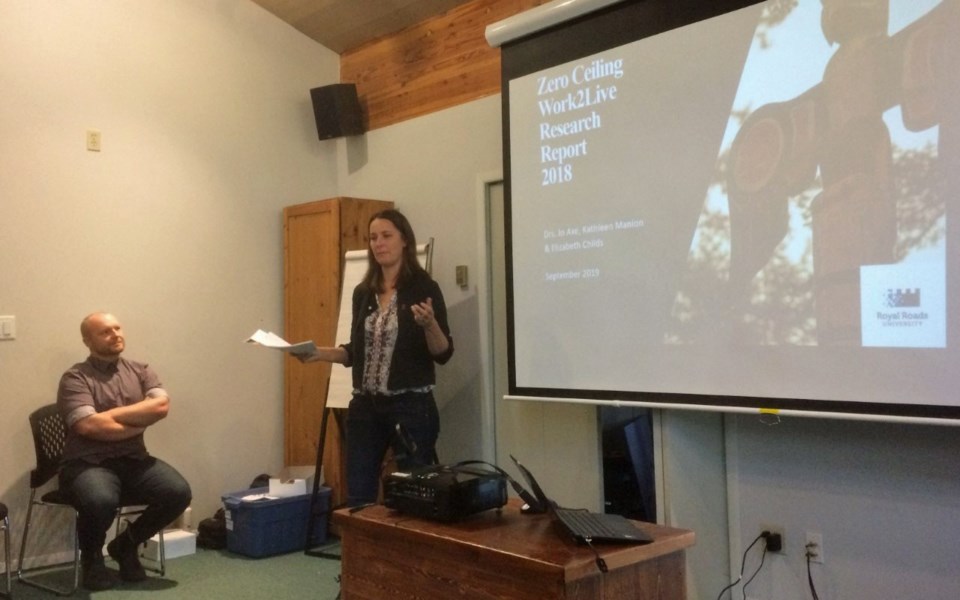 on just her second week on the job at Zero Ceiling, co-executive director Chris Wrightson heard a knock on her door. It was a young man she had never met before.

"He said to me, 'I just came by because I wanted to tell you that Zero Ceiling changed my life,'" Wrightson recalled. "He was living under the Burrard Bridge before he came into the program, so he had a pretty significant change there."

The staff at Zero Ceiling, a Whistler-based charity dedicated to fighting youth homelessness, doesn't always get this kind of feedback. The intangible impacts of their main Work 2 Live (W2L) program, which provides employment, housing and adventure-based learning for young people at risk of homelessness, can be hard to measure.

That's what makes a multi-year study spearheaded by Royal Roads University looking at the short- and long-term impacts of the W2L program so valuable. At a meeting last month, researchers presented their findings from the second year of their study, carried out between August and October 2018.

Gathered through literature review and interviews with 26 participants, graduates, employers and Zero Ceiling staff, the study identified several core themes that lent to the success of the program, as well as recommendations for improvement.

What emerged time and again from participants was the sense of belonging Zero Ceiling provided, something that was often lacking in their lives up to that point.

"Making up for what's lost in families, that's what resonated across a number of pieces of literature that I looked at and it's something that does come out with Zero Ceiling," said researcher Dr. Kathleen Manion. "Giving that little sense of trust and that person who cares about them is so incredibly impactful."

One of the "unique" findings Manion highlighted in the study was the "sense of reciprocity" that employers felt who hired Zero Ceiling participants.

"The fact that the community itself is valuing what the participants have to give, I really found that fabulous and fascinating," she said. "The community [being] supportive is so critical to the program itself and the participants on an individual level. It also sees that there are benefits to the community, that they're valuing diversity [in the workplace], that they're having more stability in a temporary workforce."

Certain program participants did note, however, that their skills were not always matched to their job position.

"Some folks are coming in with a higher skill level and being placed in entry-level jobs, so there's a bit of a disconnect there," said researcher Dr. Jo Axe.

One of the most significant challenges facing Zero Ceiling is the intertwinement of participants' employment with staff housing (many of the participants are employed by Whistler Blackcomb).

"Our housing is great right now, our employment is great right now. The big problem is having them connect," said co-executive director Sean Easton. "If someone loses their job at Whistler Blackcomb, they lose their housing, and that is the most catastrophic thing that could happen to someone in our program."

To that end, Zero Ceiling is exploring acquiring its own independent housing.

The organization is also looking at several other recommendations from the study, including an employment workbook that outlines expectations for participants for both participants and employers, as well as an orientation package that explains participants' rights and responsibilities, house rules, the party atmosphere of Whistler, and more. The non-profit also recently hired a life-skills coordinator to train participants.

Zero Ceiling is hosting its annual Masquerade fundraiser on Friday, Oct. 25 at the Squamish Lil'wat Cultural Centre. Last year's event raised $130,000, which covered the cost of five Work 2 Live participants for a year.