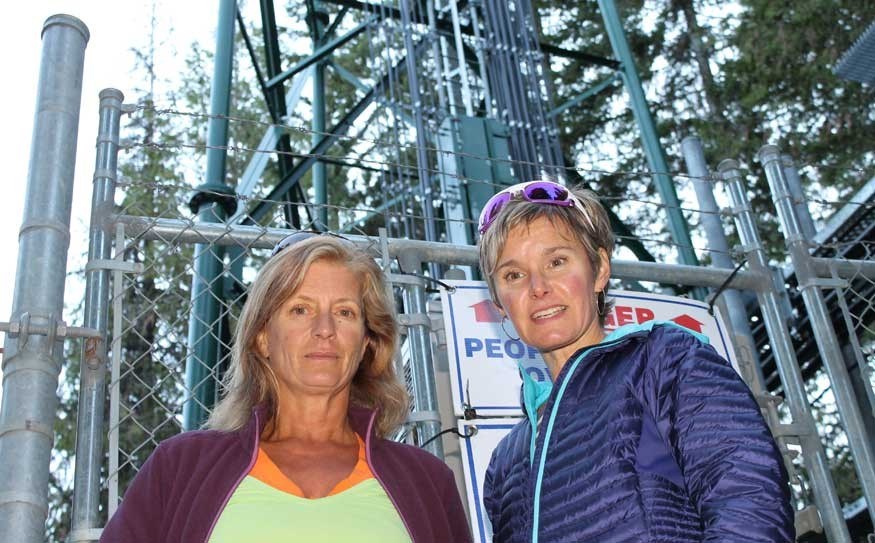 faulty TOWERS? Cheryl Massey and Lisa Geddes are among the residents speaking out about a third cell phone tower planned for the Alpine Meadows area. Photo BY alison taylor

The irony isn't lost on Cheryl Massey that while she's fighting against a new cell phone tower in her neighbourhood, she's outlining her reasons for opposition... while on her cell phone.

But that's just her point: she says it's time for everyone to wake up, all 25.5 million and more cell phone users in Canada. "To get ourselves thinking: how much technology can the human body really handle?

"Are we overloading our systems to a point where illness is something to really take into consideration here?"

She's joined in her rallying cry by friend Corinne Allison and fellow Alpine resident Lisa Geddes, who lives just below the proposed site of Wind Mobile's new tower. There are already two towers at that location, just a few short steps up towards Flank Trail in Alpine.

Unlike council, who last week raised concerns primarily about the visual aspects of another tower in Alpine, these three moms are reacting to the potential health hazards associated electromagnetic energy and radio frequency (RF) exposure. And for them, the fight is personal. Each has been touched with cancer in some way — husband, son and self.

"I'm not a scientist," said Geddes. "But what I've read really disturbed me. And when you realize that these types of emissions have been classed as equally as dangerous as things like DDT and lead, it bothers me.

The jury is still out on the issue around health safety and cell phone towers. Health Canada, which governs the industry, insists cell phone towers must meet regulatory requirements that limit human exposure to RF energy.

But that's not enough for residents Ed and Marta Hollander, who sparked the whole debate in a letter to the editor and to mayor and council reacting to a notice in the

Pique for Wind Mobile to use the Crown land site 150 metres north of Alpine Way.

Council debated the issue at the last council meeting and in the ensuing days Whistler has convinced the provincial government to extend the public comment period for Wind Mobile's application by almost one month. The deadline for comments is now Nov. 8.

Erica Rigik, Wind Mobile's manager of real estate and municipal affairs, western region, said feedback is all part of the process as it works to respond to the market demands for more cell coverage.

"At the end of the day our industry is regulated by Health Canada, indirectly though Industry Canada, so we must comply with the Health Canada standards set forth in Safety Code Six," said Rigik.

"In many cases when we do our predictive modelling, the results of our contribution — so basically a tower site by itself — are less than one per cent of the allowable limit."

On the Health Canada website, however, it states it is continuing to monitor the science regarding RF exposure.

"In 2011, the International Agency for Research on Cancer classified RF energy as 'possibly carcinogenic to humans.' The IARC classification of RF energy reflects the fact that some limited evidence exists that RF energy might be a risk factor for cancer. However, the vast majority of scientific research to date does not support a link between RF energy exposure and cancer risk... (it) is far from conclusive and more research is needed to clarify this 'possible' link. Health Canada is in agreement with both the World Health Organization and IARC that additional research in this area is warranted."

The potential for health hazards has Mayor Nancy Wilhelm-Morden listening too. This new tower, in particular, is close to her home.

"I wonder about them and about potential negative health issues but the question is very complex and complicated and I don't know that the science is real clear, but certainly the visual impacts of these towers are there to be seen, literally," she said.

In addition to the Wind Mobile tower, municipal staff is also working with another telecommunications company looking to increase its existing 17-metre cell tower at Lorimer Road and Highway 99 to 37 metres in height.

"If there are health concerns, that's right beside a daycare," said the mayor.

"My understanding is that they are talking about trying to relocate the thing entirely."

Municipal staff is preparing a report to come before the council meeting on Nov. 6, which may call for policy around proposed cell phone towers.

"We just don't know how many there could conceivably be within our boundaries and it would be something that would be very helpful to have policy on," said the mayor.

The challenge, she admitted, is that the cell towers are not under municipal jurisdiction.

In the meantime Wind Mobile has more expansion plans for B.C. as it works to be the fourth largest telecommunications company in Canada.

Thirty-one new sites have been launched in the last 12 months and an additional 25 sites are planned for the end of 2012.