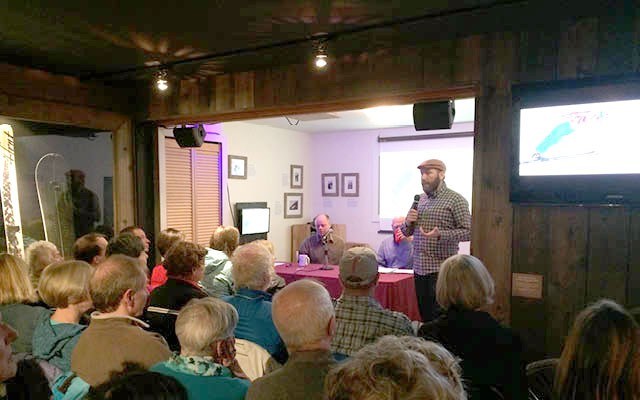 SERIES' DEBUT Arthur De Jong (left) and Michel Beaudry (behind) are introduced at the start of the 2017 Speaker Series by Whistler Museum events and community manager Jeff Slack.

A sold-out gathering for the first Whistler Museum Speaker Series of 2017 on Wednesday, Jan. 18 was equal parts nostalgia, mourning and a call to arms on the question of Whistler's mountain identity.

"Whistler — the mountain — taught us how to ski. The nexus of the valley was Creekside. It was a small, cozy village. Nothing much happened except for skiing," said guest speaker Michel Beaudry. "Early Whistler really worked — we had a sense of can-do that was really infectious.

"And then the world shifted... Has Whistler lost its soul?" he asked.

"There's an urban wave shooting up the valley," Beaudry said. "Whistler has to realize it's an urban extension of Vancouver... My heart breaks every time because there are no more secret spots."

De Jong recalled a nostalgic snapshot through the lens of a teenager as he stood in a trailer on a landfill site to interview for a job with Blackcomb Mountain. "Whistler was a community that was seen as a backwater with a hippie ski team and meandering bears," he said.

"We're almost hitting 3 million visits (annually) now. If I had said that back then, they would have drug-tested me," De Jong said.

The common refrain was the seeming loss of that can-do attitude that defined Whistler for decades.

"People didn't arrive with a lot of expectations," said Anne Townley. "I'm concerned the community has lost that and they expect to come here and have urban services, and then they're starting to complain and not doing anything about it. I'm not seeing that can-do attitude."

As much as residents have adapted, it doesn't mean it's easy — or welcome.

"I was very skeptical about Peak 2 Peak," said Cathy Jewett. "I think it's been a good thing. Now, we have another era — how nimble will we be with new ownership?"

The reality, said De Jong, is that Whistler relies on tourism.

"We exist because people want to come here and can afford to come here. We have to continue to do what we can to be an attractive place," he said. "It's tension. Success brings that."

It's tension, and growing pains — and the "dreaded" water park in the Renaissance expansion project, which came up several times, along with the Spearhead Huts initiative.

"Water parks are not part of our story," said Beaudry. "Whistler suffers from trying to be all things to all people."

And Whistler Blackcomb (WB) was slammed for its lack of commitment to the Spearhead project. One person commented: "I think we should have the best hut system in the world. Vail — with all their cash — should put something into it."

Roger McCarthy, who now runs a consulting business from Whistler after decades at the helm of some of the largest ski resorts in North America, said the Spearhead project should be "full-on Euro."

"It has to be done right, fly out the garbage and waste," he said, suggesting that new WB owners Vail Resorts may not be the new Goliath and that their ownership may well prove beneficial.

"Vail's not stupid. These people get out of bed thinking about the ski business," he said.

Beaudry returned several times to the theme of the Whistler story: What makes the community not only survive, but excel? He said residents must share their own stories with local government and Vail Resorts to ensure the local culture is not swallowed whole in the process of new ownership and expansion.

"Our story is the most important thing we have. If we really want to maintain our mountain town, we'll have to fight for it," Beaudry said.

Part of that fight might be to recreate local events, such as the restaurant ski races, as one observer noted. It is the fun events that involve locals — not necessarily the 30,000 who show up for Wanderlust or Crankworx — that generate spirit that locals can identify with.

"We have to tell Vail: You're welcome here because you bought it. But we have to fight hard," Beaudry said.