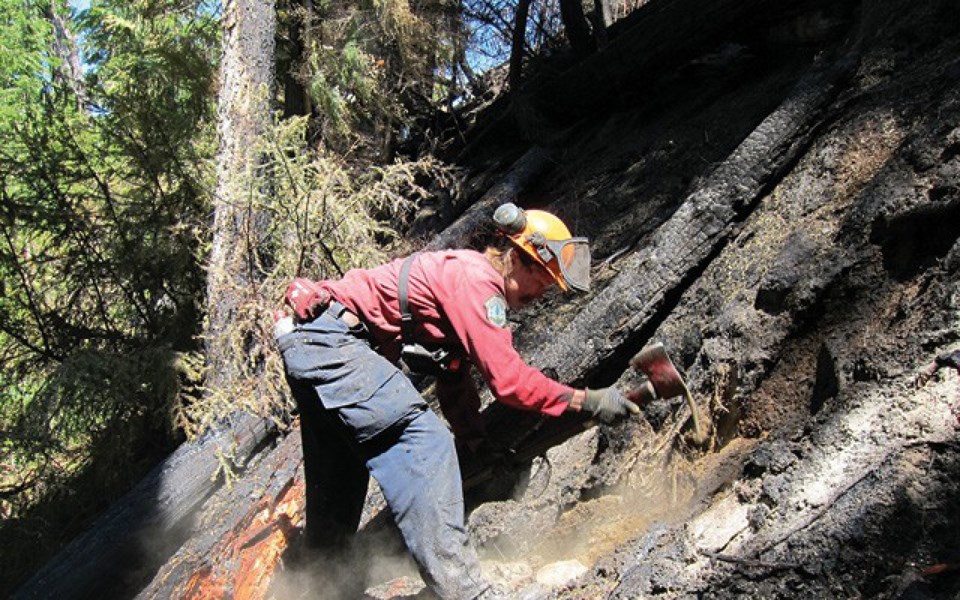 PREVENTION EFFORTS The Resort Municipality of Whistler is hard at work on fuel thinning and wildfire protection projects. File PHOTO COURTESY OF THE BC WILDFIRE SERVICE

While there have been 256 wildfires in B.C. so far this year, only 42 were active as of June 4—and only one in the Coastal Fire Centre, which includes Whistler and the Sea to Sky—but as wildfire season ramps up, the message from local officials remains one of vigilance.

With Whistler sitting at a high fire-danger rating, things like backyard burning and illegal campfires remain a concern, though McKearney said the WFRS is not seeing a lot of either lately.

"When we got into the extreme (fire danger rating) those few days there, we did the patrols. My staff have had to go and dismantle some areas in and around Cheakamus Crossing there, there was a common place where people tend to have a big campfire there," McKearney said.

"They're dismantling these makeshift campfire areas, so getting the message out.

"(But) we're not (seeing a lot of them). I think there's a good heightened awareness by our residents."

WFRS crews are attending to the fires to educate, first and foremost, but do have the ability to ticket up to $500, McKearney said.

"We can't afford a fire in our community, so it's got to take hold right away," he said.

Anyone who does see people having illegal campfires, improperly disposing of cigarette butts or otherwise endangering the community, should politely speak up, he added.

"It's everybody's responsibility, and if you see an action that could jeopardize the community, respectfully speak to that action," he said.

Whistler's wildfire protection program will target three key areas in 2019: wildfire fuel reduction (on Cheakamus Lake Road, near Kadenwood, in the Rainbow interface area and around priority critical infrastructure areas), public education and support for the FireSmart program and improvements to policy and process.

The work on Cheakamus Lake Road is wrapping up this month, with more to come, said Resort Municipality of Whistler environmental stewardship manager Heather Beresford.

"They managed to clear 40 hectares, and it's part of a bigger project—they're going to continue in the winter of 2019-20 to get another, hopefully, 40 hectares done," Beresford said, adding that all told, the area has about 110 hectares prescribed to be thinned. "We're just taking it in chunks because it's a lot of work to get done."

Combined with thinning work on the west side of the highway, along the Callaghan Forest Service Road, the fuel breaks will "hopefully slow down a fire and give firefighters a place to defend our valley," Beresford said. "There's been work done below the Cheakamus Crossing neighbourhood as well, and then we could hopefully defend and slow down, control the fires there before they get into the main part of the valley."

The Kadenwood project is about halfway done (and should be wrapping up in the next six weeks or so), while the Rainbow project is waiting on funding announcements from the province, and could get underway this fall or the spring of 2020, Beresford said.

Looking further into the future, a new draft report from fire consultants B.A. Blackwell & Associates Ltd. is close to being finalized.

"They developed the next about 10 years worth of work, and we've got some priority areas up around the high school, in behind Spruce Grove, and down around Spring Creek towards the Cheakamus Crossing neighbourhood," Beresford said.

FireSmart community chipper days and strata workdays are also back this year, as is the adopt-a-trail campaign (which is looking for volunteer groups to help FireSmart sections of the Valley Trail).

Anyone interested in either can email FireSmart coordinator Scott Rogers at srogers@whistler.ca.

Head to www.whistler.ca/firesmart for more.

Residents and visitors are reminded to report all fires in Whistler immediately by dialing 911. Fires outside of Whistler should be reported to the BC Wildfire Service at 1-800-663-5555 or *5555 toll-free on most cell networks.