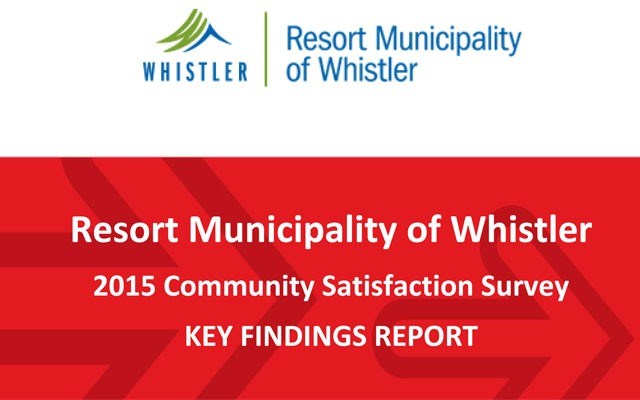 It's getting tougher to get by in Whistler, if the stats from the municipal 2015 Community Satisfaction Survey are anything to go by. And yet, almost everyone here is satisfied with where they live.

Fully one-third of the population was spending more than 40 per cent of their income on housing last year, up 14 per over in 2014 and more than doubling in just under a decade.

This comes as no surprise, rather it confirms what the municipality has been hearing on the ground, and is one of the reasons why council moved to rezone the new resident-restricted housing complex in Cheakamus Crossing last year.

"We didn't need to have the survey to tell us there were issues out there; we were hearing from members of the community and elsewhere," said Mayor Nancy Wilhelm-Morden. "It certainly is good to have the survey validate what we've been hearing. So we are moving forward with that project."

It's the same reason why council has its eye on keeping property taxes and other fee and services increases low. The 2016 budget, which has yet to be approved, is calling for a 1.5-per-cent increase to property taxes.

The annual community survey, which costs the municipality roughly $22,000, is a snapshot of how residents, both permanent and second home owners, feel about their town, showing trends on a whole raft of topics from library services to road maintenance, both of which scored very high. The 2015 phone survey took place from Nov. 9 to Dec. 21 with 458 interviews informing the results.

Despite the affordability and housing challenges, satisfaction with almost all aspects of life in Whistler remains high — opportunities for recreational activities (99 per cent satisfied), recreation trails (98 per cent), ability to get around by bike or foot (98 per cent), access to local parks (98 per cent).

In fact, 96 per cent of respondents said there were satisfied with Whistler as a place to live and spend time.

According to permanent residents, the most important issue facing the community was "housing," up significantly over last year from 25 per cent to 46 pent. The mayor said the municipality has a good grasp of the resident-restricted market but has less of a handle on what's happening in the market stock in some of the older neighbourhoods like the impact of Air bnb and the loss of long-standing suites.

"We're embarking on that whole research piece as well," she said.

"It's an issue that towns and cities across the country are grappling with."

The mayor pointed to two areas of note in the latest survey. Satisfaction increased significantly in the last year around the issue of career and employment opportunities. Last year 62 per cent of permanent residents were very satisfied or satisfied and 22 per cent of second homeowners felt that same way. That has risen to 77 per cent and 45 per cent respectively.

The mayor used a personal anecdote to illustrate. Both of her daughters have moved back to Whistler and are pursuing careers here. The increase in satisfaction may be due in part to the busyness of the resort and correlating opportunities.

Likewise, satisfaction has risen in the sphere of personal opportunities for formal learning with permanent resident satisfaction increasing 13 percentage points. This has been an area of focus for the municipality in the last several years.

Internally at municipal hall, there was a 19.5-per-cent increase in the satisfaction with the building and land development services.

"That was something where the previous two or three surveys had showed that we had a decline in the level of satisfaction so we really paid attention to that area and we've seen a result of a significant increase in satisfaction," said the mayor.

She also pointed to the municipal hall customer service counter with a 7.5 per cent increase in satisfaction.

"It really is an important document for us to use in our budget process, in our planning and decision-making processes," said Wilhelm-Morden. "Since I've been mayor I've been very adamant about making decisions based on evidence. This is an important piece of information that we can then use to make decisions."