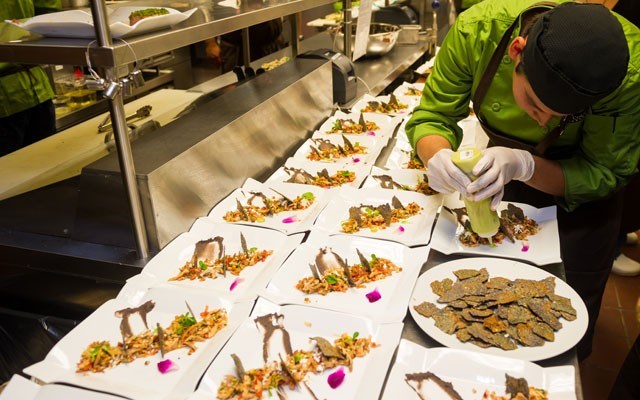 Fantastic Food Attendees loved the events at Cornucopia this year, but there have been concerns from some restaurateurs. Photo By Mike Crane/Tourism Whistler

This year Cornucopia was extended from five to 11 days, ending Sunday, Nov. 17, and overall, organizers were happy with ticket sales during Year 1 of the expanded festival, which saw more than 100 events added to the program.

"We are really excited about it. It actually exceeded expectations and we think it's got a great foundation to be built in future years," said Sue Eckersley from Watermark Communications, a key organizer of the festival. "My expectation is that we doubled the number of tickets sold over last year, which is pretty exciting."

While attendance figures are not yet available for the second weekend of the festival, Eckersley said 20 out of 24 food and wine seminars sold out during the first weekend, the highest number of sell-outs she can remember. Tourism Whistler (TW) indicated there was a 69 per cent increase in ticket sales through Whistler.com compared to last year. Signature events like the Crush Gala, House Party BC, House Party Argentina and Poured also saw strong ticket sales, meeting TW's targets.

"We saw events with good attendance, we had good feedback from vendors at different events, and there were no immediate concerns," said TW's vice president of marketing, Louise Walker. "I'd say overall the vast majority of feedback has been positive about the extension."

Even with the promising attendance figures in 2013, local restaurateurs have some concerns surrounding the organization, marketing and programming of Cornucopia as it moves into its 18th year.

"There's been some feedback that people weren't happy with the level of organization and direction (of the festival)," said Edward Dangerfield, co-owner of modern French eatery Alta Bistro.

While he supports the big-ticket events held at Cornucopia, Dangerfield said organizers need to determine the future direction of the festival and what role resort restaurants will play in it.

"Events like Crush are fantastic, but in terms of what we're trying to achieve with this festival, it doesn't promote awesome food and wine experiences in a restaurant setting. Don't get me wrong, (those events) are important but from my standpoint, I think there needs to be more engagement with what Whistler actually is and the local community," he said.

The entrepreneur and president of the Restaurant Association of Whistler met with local restaurateurs this week and plans to meet with TW president Barrett Fisher to voice some of their concerns.

"The reason some people stopped working at Cornucopia, some restaurants aren't even open and other restaurants aren't engaged, is because there really isn't a good backbone of organization, a clear direction or the marketing that goes with it," he added.

Alta Bistro hosted 10 events throughout the festival, and ticket sales were strong for the first weekend, slowed down during mid-week and were much lower than expected during the event's second weekend, Dangerfield said.

Increasing awareness of the expanded schedule will take time, said Eckersley, who noted that Watermark doubled its marketing budget this year, with TW ramping up marketing efforts in 2013 as well, with advertising reaching into Washington State.

"The reality is, and anybody in business knows that Year 1 isn't going to be an insane, instantaneous success," said Eckersley, whose long-term goal is to transform Cornucopia into a popular attraction for destination visitors. "I think we can start having the legs to start marketing a little further afield. The typical Cornucopia stay is three or maybe four days; if we can get the average stay up to five or six days like it is for the World Ski and Snowboard Festival, then we can make a big dent in terms of driving business for the resort."

Another major concern for participating restaurants was the complicated reservation booking system on the Cornucopia website, an issue that organizers said they will work on for next year.

"The website needs to be totally overhauled," said Dangerfield. "It's a very complicated booking engine that no one really understands and the booking process for restaurants isn't streamlined. Tourism Whistler was taking reservations and then it filters through the restaurants, but not accurately."

Pepe Barajas, general manager of The Mexican Corner, agreed that the website was hard to navigate and said some events were listed as sold out when there were still tickets available. He recommended giving restaurants the ability to log in to the booking engine in order to track ticket sales more regularly and plan accordingly.

Barajas, who also serves as a director of the restaurant association, said the festival was "probably too long" and would like to see more attention paid to mid-week programming with appearances by high-profile chefs to attract out-of-town visitors if the event is to continue in its current 11-day format.

"We have a lot of good chefs (in Whistler), but I'll be honest with you, why would I pay $135 to see a chef that I can see anytime during the year for $40?" asked Barajas, who also said the busy programming slate created too much competition between events. "We need some other people that we don't normally have so they add value to the festival."

Eckersley said she'd love to host a top-level chef for the fest, but admitted budgetary limits are a constraint. Cornucopia received $75,000 in augmentation funding through the municipality's Festival, Events and Animation program for the 2013 schedule.

"I think there's the misimpression out there that there's bucket loads of money sitting there to execute these types of programs," she said. "If we're looking at bringing in a top chef, you're looking at tens of thousands of dollars. Well, how do you make that make sense in terms of throwing an event that can help you recoup some of those dollars? It's all things that have to make sense in terms of a business plan."

The 17th-annual Cornucopia festival ran from Nov. 7 to 17. Next year's event will continue in its current expanded format, said Eckersley.