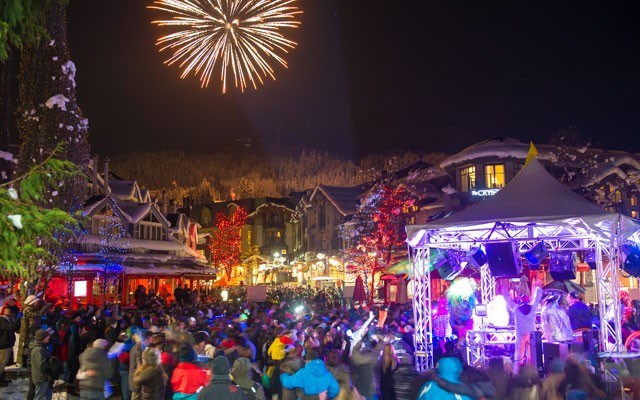 Expect a multi-pronged night of fun and festivities on New Year's Eve to welcome 2014 to Whistler, with music and fireworks and a whole lot of dancing.

There are both ticketed and free family events on Dec. 31, sponsored by the Resort Municipality of Whistler (RMOW), including: Skating at Whistler Olympic Plaza from 6 p.m. to midnight, a family sing-song (and sweets!) at the plaza's warming hut, a vaudeville night at Millennium Place nearby — sponsored by the Whistler Arts Council (WAC), the New Year's Eve Kids' Countdown at the Whistler Conference Centre at 9 p.m. (part of Whistler Presents: The Holiday Experience) and a teen dance, the Much Music Dance Party, for ages 13 to 18, put on from 8 p.m. until midnight, by Watermark Communications.

Meanwhile, Fire and Ice at 11 p.m. at the base of Whistler and Blackcomb mountains and fireworks at Skiers Plaza at midnight will be free.

On New Year's Eve, individual tickets go up to $20, while the children's tickets remain at $10 or free for under twos.

All RMOW events are alcohol free, and bus transit in the resort will be free from 6 p.m. to 4 a.m.

"We've had a family-oriented New Year's Eve since 1989. The momentum for it has really built over the last few years... there's all kinds of stuff going on," Mayor Nancy Wilhelm-Morden says, adding that between the family events and the adult nights at Whistler's hotels, restaurants and clubs, every taste was being well catered to.

"Absolutely. My family goes back east very often for Christmas, but when we are here for New Year's Eve we take the bus in and just enjoy the ambience in the village, go and have some New Year's cheer somewhere and then watch the fire and ice show and the fireworks. It's just a fantastic evening."

"Thousands will come out. It's always packed.

"The other thing to note that's exceptional is that the transit is frequent and free... no need to drink and drive or worry about parking. They can leave vehicles at home."

Anna Solich, who set up the New Year's Eve programming for WAC, says all three levels of Millennium Place will be transformed into a circus-themed playground.

Solich said they expect around 1,500 people over the course of the night.

"And there will be a gigantic bubble wrap stomp and balloon drop for the Kid's Countdown to New Year 2014 at 9 p.m."

Over the Influence, the Vancouver hip hop dance company, will put on pop-up dance performances throughout the night and after the countdown.

Music will be provided by The Sociables and DJ Rich A.

"They are mostly a family audience with the majority of the activities programmed around the two to 13-year-old age group. However, there is something for all to enjoy!" she said.

"A lot of time is being invested to create this special event and bring its magic to our guests. We will have over 20 individual activities and performances of local and international calibre."

Sue Eckersley of Watermark Communications said the Much Music Dance Party for teens at the Whistler Conference Centre and the family event running alongside it is, "a lot of fun and a safe place for 13 to 18 year olds to welcome the New Year."