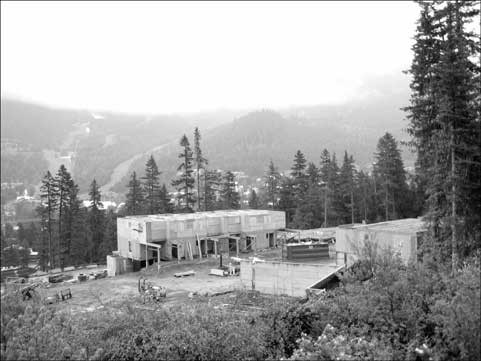 With the Bank of Canada announcing its seventh consecutive overnight lending rate increase on Wednesday, some homeowners that opted for variable rate mortgages are starting to feel the pressure.

The Bank of Canada’s short term interest rates now sits at 4.25 per cent, a quarter of a percentage point higher than it was at the time of the last increase in March – the seventh consecutive increase since the fall and a far cry from a low of less than two per cent just two years ago.

Fixed-rate mortgages, which are tied to the bond market, have more or less remained the same for the last few years, while variable-rate mortgages are tied to lending rates and as a result are creeping up into the same range as the fixed-rate option.

It’s still a good deal, with mortgage rates still hovering around 40 year lows, but according to Roger Stacey of the Whistler Mortgage Company some homeowners will have to adjust their budgets to accommodate the increases.

"People feel these increases," he said. "Every time (Bank of Canada interest rates) go up, their mortgage payment goes up.

"What’s happened is that people who have taken a variable-rate mortgage are feeling the pinch, they’re either refinancing, trying to pull some equity out of their property to pay off credit cards… or converting to a fixed-rate mortgage to get more stability.

"Unfortunately people spend what they earn and budget around that. When the rates were lower they were able to say, ‘hey, extra dollars, let’s put them on the credit card, go on a trip, buy a new car.’ Now that their mortgage payment is up and they have committed all their money to those things, well suddenly they find themselves in a position where they have to take some action."

According to Stacey most banks qualify customers for mortgages based on their ability to meet the fixed-mortgage rate, which was slightly more expensive in the past but offers more consistency for families who like to keep to budgets.

Stacey says the rate increases have not noticeably affected the housing market yet, but where employee housing is concerned he believes that some people may be choosing to buy smaller places. Several of his clients have switched to fixed-rate mortgages in response to the rate increases, but otherwise Stacey says home ownership remains a priority for a lot of people.

However, if rates continue to increase he believes that will have an effect on market housing and employee housing sales. That’s when Stacey says other factors, like the cost of living, gas prices, inflation, debt load, and the strength of the economy as a whole, will come into play when making decisions.

"Most people have to rethink things a little at this point, be a little more conscious of (interest rates)," he said. "It hasn’t moved enough to cause serious hardship, but if things keep going like they’re going…"

Stacey has been in Whistler since 1977, and says mortgage rates are still within 40 year lows despite the recent increases. In the early and mid-1980s mortgage rates were in the range of 20 per cent, and he remembers two properties on Alta Lake that were mortgaged at 21 per cent at the five year rate.

"When things went down to 11.5 per cent, people thought they’d died and gone to heaven," he said. "And it’s not that long ago when a good deal was an 8.5 per cent rate.

"So if you put it into the big perspective, taking into account disposable income and everything else, home ownership is still more affordable for more Canadians than it has been in quite a while."

Pat Kelly of the Whistler Real Estate Company says while the increases might be small, every increase has the potential to impact young families and people living in staff housing.

"If it gets to the point where they may not be able to pay the price every month, they may have to buy less or not at all," he said. "If (realtor) Stuart Munro is right and we won’t be able to sell a single family staff home in Rainbow for less than $650,000, a half a point increase could mean an extra $300 to $400 a month for a family – that’s approximate, not having the exact numbers in front of me, but whatever that number is it could be the difference between buying a home or not."

Kelly says he has not seen a direct impact from interest rates on the Whistler market yet, but said that people are definitely more concerned about rates than in recent years. Some buyers are deciding to act now rather than wait, hoping to lock into a lower fixed rate mortgage in case rates continue to increase.

"Rates are up about 50 per cent over the last year and a half, and that’s a big increase in your cost of living if you have a variable rate mortgage," he said. "Anytime you increase the cost of borrowing money that has to have an impact somewhere."

The most recent increases have not impacted what Kelly calls the "wealth market" – people who buy properties in Whistler with discretionary income. He says that market represents about 80 to 85 per cent of home sales.

"More people are giving serious consideration to fixed-rate mortgages than they were even 18 months ago, when everyone was on a flexible-rate mortgage," said Kelly. "Certainly there’s more risk with a floating rate, and a lot of people don’t handle risk well – especially young families that want predictability for the future. I’d advise that if you don’t have the resources to deal with rate changes every three months, you should give serious thought to the fixed-rate option."

Robyn Adamache, market analyst for the Canadian Mortgage and Housing Corporation, Lower Mainland, says their office has not seen much of an impact from rising rates. If anything the demand for new and resale homes has increased, resulting in some of the highest real estate prices in the country.

She expects housing prices to continue to increase this year but at a slower rate due to a 36 per cent increase in housing starts compared to last year.

"In recent years the housing starts were flat for a lot of reasons – various constraints on builders because of the lack of skilled trades available, as well as a lack of land priced well enough to still be profitable for development," said Adamache. "What’s happened is that (developers) have found a way around those constraints. They’re more efficient at scheduling trades, and municipalities have found a way to get building permits through faster, making it economical to build again."

Adamache does not have specific figures for Whistler, but says sales numbers show that property ownership is still a main priority for families.

"Whether or not (interest rates) go up or down, people continue to buy. An increase in price just means people find other ways to afford their (mortgage) payments, ways to work it into their budget," she said.

The Bank of Canada decided to raise overnight lending rates by another quarter point on Wednesday to 4.25 per cent, a five year high. According to the bank, the seventh consecutive increase was required to keep inflation under control as the economy continues to outpace expectations. Despite fluctuations in gas prices, natural resources and other commodities, and a rise in the value of the dollar, domestic demand for goods and services is expected to remain solid through the summer.

Analysts quoted in Canadian newspapers are divided as to whether interest rates will stabilize or continue to increase through 2007. A few analysts also believe that the growth of the economy will eventually slow or stall due to factors like gas prices, and that rates will fall.

The Bank of Canada’s next scheduled date for announcing overnight lending rates is July 11.