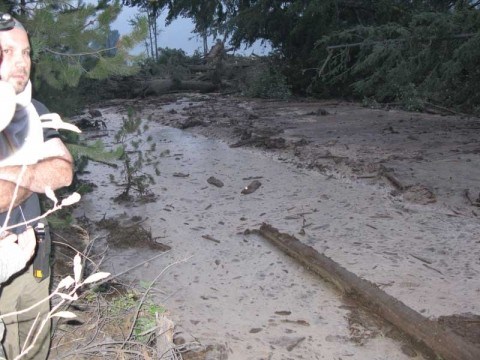 Patrick Smith came about as close to death as he ever will last week when he narrowly avoided being swallowed up by the second biggest landslide in Canadian history.

He and four friends were on their way to an annual hiking trip on the Salal Creek Trail and found themselves face-to-face with a flowing wall of mud that started with an avalanche near the top of Mount Meager, streamed down Capricorn Creek and built a natural dam at Meager Creek. For a while it also partially blocked the Lillooet River.

Smith, an assistant administrator for an online payments company based in Port Moody, left Vancouver with his friends and a black Labrador at about 11 p.m. on Thursday. They intended to do half the Salal Trail and then hit the Bridge Glacier, a hike they'd been trying to do for a few years.

They arrived at the Upper Lillooet campground at about 3:25 a.m. on Friday, a camping spot that's located about 70 kilometres from the start of the Lillooet Forest Service Road in the Pemberton Valley and right before the turnoff for Meager Creek Hot Springs.

One of the group hopped out of the truck and dropped a backpack on a picnic table when out of the dark they heard a rumble that sounded like a thousand freight trains coming towards them. Another member of their party, unfamiliar with the area, wondered if there was a railway in the area and whether a train was rolling by. Smith quickly set him straight.

"It sounded like the mountain across the river was coming down on us," Smith said in an interview.

The friends debated what to do for about 10 to 15 seconds as the rumble grew louder and trees began snapping all around them. They piled back into their truck, a Yukon XL, and drove in pitch black on to the Forest Service Road where they came face to face with a wall of black water.

"We were just shy of the Meager Creek turnoff," Smith said. "We basically turned off, tried to get up that road, tried to outrun it, drove for literally five seconds and then the headlights hit this big wall of water, probably about two feet high and it was just bubbling black water coming straight at us."

The driver hit the breaks, spun the truck into a reverse and did a 180 before water started to overrun the vehicle on two sides. They had to punch the accelerator hard just to get away and head down the road.

They drove about 500 metres before they saw giant, old growth trees flowing across the road in a torrent of mud. They stopped about 50 metres short of the torrent and found themselves stuck on the road with water and debris flowing up behind them.

"We started breaking out the headlamps to see what was going on beside the road," Smith said. "There was a river of soupy mud and big logs flowing by us, probably about 10 feet across. There was actually some firm ground on the other side of it. We sat there debating, do we try to get across the soup?"

The friends began throwing their packs together in case they had to abandon the truck. Smith walked about 100 metres up the road, his feet soaking in the muck. All around him debris continued to flow. His friends soon grabbed their packs and joined him, eventually finding a log they had to walk across or risk being swallowed up in a newly-formed river that they couldn't swim.

They managed to walk across the log and get to firm ground on the other side, headlamps lighting the way through the darkness. They figured if they could get to high ground they'd be OK.

Once there they dipped sticks in the mud to determine how much it was rising. They were in the bush for three hours before daylight broke. Many of them had taken geomorphology classes in university and they worried about the next event, whether there'd be a bigger, slower movement of mud.

After climbing over fallen trees that gave them a path across the muck, the friends made their way back to the truck and found it intact - dirty, but still standing. They got in and drove back to the campground to check up on another camper they'd seen there earlier.

Once there, they heard another rumble, just as they predicted. They got into the truck once more and found a spur road at the entrance to the campground that could take them away from the debris.

They drove a few hundred feet to another hillside and, feeling safe for the first time that night, they waited 10 minutes until they heard something moving through the bush. The spur road behind them was completely engulfed by water up to 10 feet deep. The whole road disappeared and there was a torrent running through, but they were safe where they stood.

"I think we just sort of shut down for an hour and tried to catch a bit of sleep," Smith said.

A helicopter began flying around at about 9 or 9:30 a.m. Friday and the campers used tarps to signal to it. A Blackcomb Aviation chopper noticed them on the third or fourth pass and Search and Rescue volunteers airlifted them in two shots to a pumice mine just past the Meager Hot Springs turnoff. They were just four of an estimated 13 campers evacuated from the area. None of them had any idea what they'd just averted.

"In our minds, we thought the mountainside had collapsed across from the campsite and nailed the river," Smith said. "We had no idea of the scale of what had actually happened."

The landslide began when a glacier broke off from the top of Mount Meager and ran all the way down Capricorn Creek, picking up material as it flowed across Meager Creek, creating a natural dam. As the material continued to flow it partially blocked the Lillooet River. Three million cubic metres of water backed up behind the dam, stirring fears of flooding in the Pemberton Valley.

About 1,500 residents in the Meadows and Mount Currie were ordered to leave their homes on Friday night in anticipation of the Lillooet River flooding.

Those fears were eased on Saturday morning as the water carved a 25-40 metre incision in the dam and began to flow out naturally. Water rose to about 3.7 metres in the Lillooet River but there were no significant flooding issues.

Rick Guthrie, a regional geomorphologist with B.C.'s Ministry of Environment, said the risk has been alleviated for Pemberton residents for now but the slopes around the Meager complex are still unstable.

"At this point, people are not facing a considerable risk," he said. "We are monitoring it. The Pemberton Valley is about 60 kilometres downstream, it would take something substantial to create a problem. What we're looking at really is what the long-term effects are in terms of sediment transport.

"We are also looking in Capricorn Creek for other slides that may be coming down again, but they will be considerably smaller."

The lifting of the evacuation order came as welcome news for Connie Sobchak, a lifelong resident of the Pemberton Meadows. She was attending a family reunion at the home of her parents Ruth and Elmer Hellevang, also Meadows residents, when the call to evacuate came at midnight Friday.

Sobchak and her parents chose to stay, fearful of the risk that the landslide posed but confident that they would be safe. They stayed through a rash of forest fires in the summer of 2009.

"It was pretty scary," Sobchak said. "We had it last year with fires so we're a bit used to it now, being woken in the middle of the night. It's a bit scary."

Marty van Loon runs a farm that's located adjacent to the start of the Lillooet Forest Service Road. He, too, chose to stay there with his family and he hopes that the provincial government continues to monitor the slide zone - something he doesn't feel there has been enough of.

"I think everybody was aware of the potential danger but nobody, as far as I'm aware of, there wasn't any continuous monitoring," he said. "It's a sporadic kind of thing, I don't think anybody predicted this."

"The Mount Meager complex is made of volcanic material," said Guthrie. "We have had continued and ongoing failures over the last number of years. We expect it to continue, this one just happened to be particularly large.

"We have had water melting from permanent snow and ice, so that gets into the cracks and that creates increased pore pressures. That contributes to the instability."