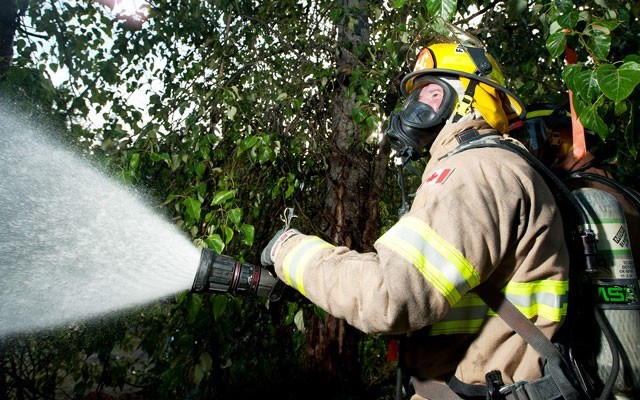 LONG-TERM DEAL The Resort Municipality of Whistler has come to terms on a new contract for the Whistler Professional Fire Fighters' Association. photo by Mike CRANE/Courtesy of RMOW

The Resort Municipality of Whistler (RMOW) has reached a new collective agreement with the Whistler Professional Fire Fighters' Association (WPFFA).

The agreement covers an eight-year term from 2012 to 2019 and includes annual wage increases of 2.5 per cent.

The increases were based on wage settlements with firefighters in other municipalities.

"I'm really pleased with the outcome. I'm glad we've managed to reach what I would call a good understanding between ourselves and the fire service," said Mike Furey, chief administrative officer for the RMOW.

"I feel really confident that there's a lot of good will. The firemen and women, they're not just staff, they're members of our community, and I really felt they had the best interests of the community through our negotiations."

Al MacConnachie, president of the WPFFA Local #3944, agreed that the negotiation process was an amicable one.

"It happened in a timely manner and it seemed to come off as a very amicable agreement between both parties," MacConnachie said. "We're happy with it, I would say."

The last deal between the RMOW and WPFFA expired at the end of 2011. Having a new deal that extends to 2019 is an appealing prospect for firefighters, MacConnachie said.

"The main thing around the fire hall here is everybody's happy just to move on now," he said.

"Now we can just carry on and do our job to the fullest."

The negotiations resulted in some "trade-offs" that will help reduce costs, such as the reduction of overtime and increased flexibility in scheduling relief firefighters, Furey said.

"We see that as really beneficial to the fire service to allow us to have more flexibility in how relief fire fighters are scheduled for their duties, and we anticipate over the life of the agreement that that provision will result in substantial savings in the order of hundreds of thousands of dollars," he said.

"We're just really pleased with the willingness of the union members to move forward in the spirit of collaboration and trying to reach an outcome that meets the needs of both the union representatives and employer RMOW."

Whistler taxpayers won't notice any immediate impacts, but the new deal will be factored into future budget talks, Furey said.

The Whistler Fire Service has a budget of just over $3.7 million, though it's difficult to compare that to similar-sized communities.

"And unlike other communities of 10,000, we have higher-storey buildings like the Fairmont... that require specialized equipment."

He also wanted to thank Furey and the RMOW.

"It did go very well with the municipality," he said.

"They came back to us with full support from council on this, so it's a good feeling."