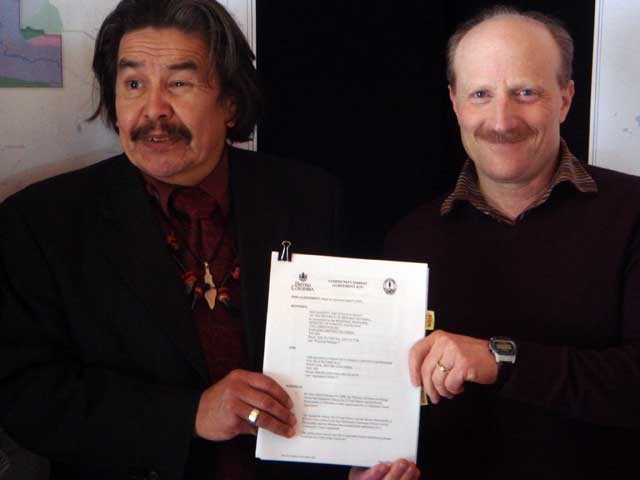 The Resort Municipality of Whistler (RMOW) and Sea to Sky's First Nations are officially in the forestry business.

The RMOW, in conjunction with both the Squamish and the Lil'wat First Nations, signed a joint community forest agreement with the provincial government on April 9 that gives them tenure over 30,000 hectares of Crown forestland - and the right to harvest about 20,000 cubic metres of timber out of it.

Whistler Mayor Ken Melamed called it the proudest moment of his time in office.

"There's maybe not a single bigger pride that I will have after having served this community for this many years," he said.

"When I was working with AWARE we were working on this, to have the ability to have this level of community influence over the land in partnership with the First Nations, something that we have also been looking forward to for so many years. I have to tell you I have big goose bumps."

The RMOW has been working on the forest tenure for years. In November 2007 it signed a letter of intent with the Squamish and Lil'wat to partner on a community forest in 36,000 hectares of forestland that surrounds the RMOW. The final agreement gives a tenure over only 30,000 hectares.

According to a Ministry of Forests news release, the community forest, known as the Cheakamus Community Forest, encompasses the Callaghan and Brandywine Valleys, the Wedge, 16, 19 and 21 Mile Valleys and the Cheakamus Valley.

Each agreement is a form of legal tenure that allows communities to steward development of Crown forest resources. They give communities exclusive rights to harvest trees and manage other resources, such as recreation, wildlife and water, according to the ministry news release.

The tenure is renewable and is the first being leased for a 25-year term, according to West Vancouver-Garibaldi MLA Joan McIntyre, who was present at the signing. All prior community forest agreements have been renewable tenures at five years each.

The RMOW, the Squamish Nation and the Lil'wat Nation are equal partners in the tenure.

A board of directors will administer the community forest, with two representatives from each partner in the tenure. The joint tenure has already selected Richmond Plywood Ltd. as its operating partner. It's expected that the company will do all the harvesting out of the forest.

A workshop held April 9 sought community input to help establish recreation priorities in the community forest, whether trails, campsites or upgraded roads. It also asked for ideas regarding services that ought to be implemented in the forest. Firewood sales, snowmobile tours and First Nations cultural tours were among the options.